Did the Russian State... Part XIV by Nils Johann (Conclusion) 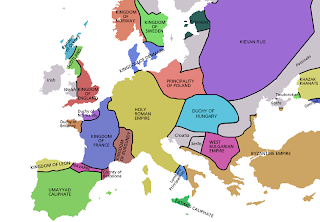 It are not always the material ripples of historical events that reach us. The stories of events that in their time were relevant, may much sooner reach us. The way these then are imbued with new meaning, sometimes is the only thing that makes a historical event seem relevant. It is in some way misleading, to maintain that past occasions, at any price, effect future development, that is far-flung in time, and separated by centuries. The second chapter of the paper demonstrated this, all though from an 'eagle's perspective'. This enabled us to see how the myth of a liberal, democratic and prosperous 'Western Europe', by force or ignorance, has been projected back in time, to comply with our contemporary notions and fancies of what is right and proper, while disregarding the immense change, forced upon the societies, and Institutions, that experienced the brunt, and sudden force of the Industrial Revolution.

On that basis it seems plausible, that the backwards-projection of Cold War reality, like in the leading case of Wittfogel's Oriental Despotism: A Comparative Study in Total Power, certain misleads, and errors, have been allowed to occur in our perception of 16th century Russia. A tense Anglo-Russian relationship during the middle of the 19th century may have worked to establish the same effect, during the infancy of modern historiography. The emphasis on what separates the Russian and 'West-European' state formation process of the 16th century, is therefore in this paper interpreted as a false dichotomy. The dilettante 'National Histories' of the age, that favored long chains of causality for explaining their contemporary surroundings in the frame of 'The Nation', assumed, just like Yanov, Landes, Ferguson, and others, that there must be a chain-reaction spanning centuries in order to explain their contemporary condition. In order to make the writing more relevant lines of connections seem to be forced into the narrative, either backwards or forwards. Cum hoc ergo propter hoc, is a common error of reasoning where 'Correlation' is mistaken for 'Causation'. We need not all act as Skinner's pigeons. 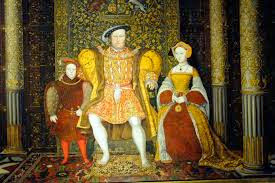 This paper notes the challenge posed by the anachronistic concepts superimposed on the interpretation of the age, to understanding the age of Ivan and Henry on its own premise. As a response it attempts a comparison of the reigns of Ivan IV and Henry VIII. The comparison is intended to serve as an internal frame for reference for the period, but is also a search for positive similarities between the regimes. What is shown by this is a general similarity. It is tricky in such a comparison to discriminate perfectly without going in the trap of just 'cherry-picking' the examples one wants, but the paper focuses on the general conditions of statecraft of the age. By giving a general introduction to wider European developments, shaped by stronger Monarchs, who manage a paper-bureaucracy, and standing gunpowder armies, the paper sets the stage of its main subject, while establishing possibility for wider contextualisation. It then progresses to an introduction of the formation of the 'royal houses' of Henry VIII and Ivan IV, with a brief resume of their families 'road', to the power that the Monarchs would wield. Both monarchs temper and subdue the noblemen that surround them in order to ferment their own power-base. Their methods were brutal and efficient. Whether the opponents of the Crown were executed by boiling alive, drawn and quartered, or any other number of imaginative methods, the principle seems to be the same with both Crowns: Maintaining order by demonstrating power, through the application of violence. 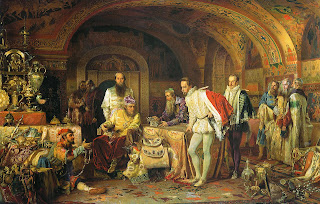 Simply: Installing Terror. The Technical breakthroughs of the time enabled the ruling of larger territories, accompanied by centralization of power, not seen in Europe since the decline of the Roman Empire. This then also called for a restructuring of governance. Parliamentary systems are reformed to adapt to this reality and, are re-functioned to act as management organs of the Crown. At the time none of these Parliaments are embryonic 'democratic' institutions, in the modern sense of the word, but they function as a line of communication between the Monarch and the Commoners. Their main function is however to recognize the laws of the Monarch, and to effectuate the levying of taxes. The taxes are in both cases intended to serve the foreign policy of the King. - The protection of the realm; the execution of war-craft. Differences occur in the detail of how Ivan and Henry chose, or can choose, to fill their 'war-chest', and there is better method to the plan of Henry. He implicates part of his loyal nobility in his robbery of the Church, while Ivan's Oprichina leads to the estrangement, and tempering, of his high nobility. The funds from their respective heist, do however go towards the same purpose. They carry the war to their enemies, subduing them, plundering, and gaining dominance of even larger tracts of land. By the crack of the lash, and the screaming of cannon, with bloody sword in one hand, and a pen in the other, surrounded by rich palaces and poor peasants, gibbets, and henchmen, proto-bureaucratic states were formed, both in England and in Russia. They were materializing in all of Europe in the period.

Comparing two reigns of respectively forty-three and sixty years, of almost continual warfare at the western rim of Eurasia, called for an eagle-perspective in this paper, that ignores detailed differences in the formation of Russia and England, which there of course are. The grand lines of the narrative of the paper, however demonstrates that there are remarkable similarities in the formation of Russia and England. Russia is in its proto-state's functioning, during the period of the 16th century, more alike, than unlike England.

So, if you have taken the time to read through this whole paper, what are your thoughts? Any disagreements? What did you like and feel like you learned?
Posted by Badgerdown at 5:28 PM