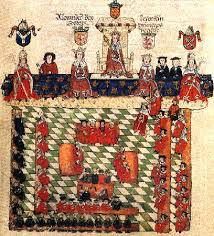 'Parliament' is the normal consequence of people trying to live together, and the English alone, developed neither of those two concepts. Neither did Ivan IV invent it in Russia. Communities meet to talk, and decide on matters regarding the community. The 'Veche' in early mediaeval Russia, preceded the Russian state-formation, and it worked as a Forum, for talks on economics, law and war, like the Norse Thing or the Swiss Landesgemeinde. The free cities of Pskov and Novgorod are often held up as later examples of these kinds of assemblies. None of the assemblies, like the Veche, or Parliament were open to everyone. We need to keep that in mind, before we start to romanticize a pragmatic tool of government. They are fori, where those who have franchise in the state, -those who contribute directly to the state, meet. “Taxpayers” in one form, or another; warriors, landowners, merchants and master tradesmen. Those who possess a vital skill or a business. After the gathering of the dispersed territories under Muscovite rule, these forms already in existence, were utilized by Ivan IV. He used it to govern and organize his realm, and he enacted reforms of many sectors of state. Opinion on how Ivan's Zemsky Sobor worked differ, from that it was a puppet parliament, there to enact his will, to a (sometimes) legitimate channel of popular representation. Crummey states,“...it would be a mistake to view it as an embryonic representative institution.”

To counter the claim in Crummey: It would be a mistake to see the English parliament aslittle more than a constant Byzantine court intrigue.

If we look at how Henry used his parliament to shore up the power of the Crown, there is however no great difference to Ivan's use. And here a special understanding is needed, because this will seem odd to those of us, accustomed with a modern parliamentary system. It needs to be seen in regard to the justification for power, being derived from 'Divine Right', and thus parliament gathers with the Monarch, for him to explain how he understands the will of God, and for them to agree that his interpretation is correct. And who wants to anger the Warlord who runs the “legal” punishment-system? But with this in mind, inevitably the system must have communicated in both directions. (*To relate Crummey's statement to a anachronistic example of representative government, the United States of America might serve. Even though regulation varied across the states, on average 5% of the adult population maintained the right to suffrage. The right to representation was restricted even more, but the representatives were deeming themselves as representatives of the entire populous. )

In order to effectuate policy, and to communicate better with the vast domain of the Czar, he called for 'The Assembly of the Land' in 1549. It was made up by the tree usual estates, The Nobles, The Church, and The (rich) Townspeople and Merchants. This 'Zemsky Sobor' developed to gathering regularly after that, and was also taken to advice on controversial issues. It seems, its main purpose was to agree with (or “understand”) the Czar's interpretation of the will of God, as was the case in England. In addition, a council of chosen nobles, The 'Rada' or a 'governing council' if you will, was established, and the organization of The Church was centralized. The 'Stoglavy Sobor' ('Gathering of Hundred Heads') was used to unify the practices of the Church's rituals and its regulations. Like with the Zemsky Sobor, it was done to streamline the 'chain of command', and to ease management. In rural regions, increased local self-government was introduced. The communal councils were attributed privileges that prior to that had been the jurisdiction of the local noblemen / governors.

One trait was the 'popular' election of local tax-men. Crummey claims;

“The explanation for the Monarch's broad power lies not so much in the efficiency of his government as in the lack of barriers to his exercise of it; for no estates or corporate organizations limited the Grand Princes' freedom of action, and no constitutional norms defined their authority.”

Crummey's work ignores the bargain character of what Ivan builds, as these systems inevitably will communicate both ways. Further on, the work also ignores that there is Law, and that the system of Ivan seems to be a “normal” Divine-Right-Monarchy for its time. Even more remarkable, is Shepard's comment in his review of Crummey, when he concludes on the basis of Crummey's work;

“But at the end of Ivan's reign, after all the blood-letting, he still ruled with the collaboration of the clans of the higher nobility, and for the most part these were the same clans that had been pre-eminent in the opening years of his adult reign!”

It is a interesting contradiction to take note of. If there is cooperation with the high-nobility within the Rada, how can it be that there are “no estates or corporate organization” to limit the Grand Prince? The 'Zemsky Sobor' was also a tool for achieving cooperation, and this does not differ greatly from the English 'Parliament' during the period. 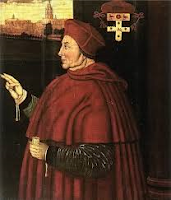 Henry needed capital to wage war for his dynastic claims on the continent, and to construct palaces. He had emptied his coffers and exhausted the land by the middle of the 1520's. The system of taxation had to be reformed in order to enrich the Crown. The first plan was executed by the King's Minister, Cardinal Thomas Wolsey (*1473–†1530), who managed to gather funds through an increase of the tax-burden on the wealthy, land-'theft', and by forcing the nobility to “buy” a kind of prototype state-obligation.

As we remember from Spittler's definition above, we are here looking at two semi-bureaucratic states where income comes from personal agricultural landholdings, and to a minor extent from the tariffs on foreign trade. Both monarchs, next to the tariffs on foreign trade, gain their means from their personal land-holdings. For any further taxation, the security of the realm needed to be at risk. This would also have been the main reason to call together 'Parliament'. The dominant reason for any self-respecting monarch to talk to a 'Common House', would have been to enact special taxes, without too much resistance. (This might be a motivational factor for the constant warfare of the period. Special taxes would have to be justified, as issues of defense of the realm. It served the concentration of capital, and the centralization of co-ordination, to the Crown.) However, if he could, the Monarch would avoid the hassle of having other people telling him how to run his 'firm'.

This takes us then to the great heist, performed in a similar way, in order to achieve similar ends, by both monarchs. The details of course differ, but Henry and Ivan do come to a remarkable solution to their challenges, regarding organizational and financial autocracy. Their goal is it to reduce dependence of people that are not necessarily to be trusted, discipline their own rank, and to gain a higher degree of fiscal independence. The Monarchs' role as Primus Interpares was changing in many emerging states during this time. As the positions become more polarized, we see the emergence of Autocracies (Denmark, Russia, Iberia, France, and England until the civil war), and their counterpart, noble-republics (The Netherlands, The Swiss federation, and to some extent also Sweden and Poland,).

Posted by Badgerdown at 5:47 PM