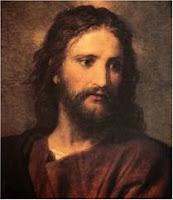 I have always felt a little wary about expressing my testimony and feelings on Christ. Some of my reluctance stems from foolish reasons- fear of rejection or conflict, worry about causing offense and also a small amount of laziness- it takes courage and effort to do it! But another reason is also that sharing your testimony is so personal and makes me feel so vulnerable and exposed... open to attack while my heart and soul... my most beautiful and vulnerable parts are laid bare and feel naked and defenseless. And I have found that many people who are Christian, but have different beliefs, belong to different denominations, etc... chose this opportunity to thrust forward... not with thoughtful conversation, but with reasons and 'proofs' of why my beliefs are wrong. The reasons vary from 'worshiping the wrong Christ' (How many people in this world have been known as the savior Jesus Christ? To my knowledge there is only one man...), to scripture verses expressing why my thought processes are wrong and my eternal soul is in peril. Some people suggest that even questioning the culture surrounding the gospel is disloyal and inappropriate... to both Heavenly Father, prophets, apostles and the Savior- questioning even expresses that I 'do not sustain them' no matter how much I feel like I do. It is very painful to have my beliefs belittled and to even be told what I think... I have actually been amazed by how many people tend to feel pretty comfortable and even justified in telling other people what those people think... which really seems to be a reflection of the speaker's thoughts and not the individual being judged.

So over the last few years, I have actively tried to work on feeling a little less fear and trying to be more open about my thoughts. In a few ways, I have been more successful – I have a few really good friends who I actually feel safe enough to share my thoughts and feelings with. And I have actively pushed myself to try and start conversations with people I do not know. It's probably strange to some of you who know me, but I do feel uncomfortable talking to people I don't know and trust... which is funny because I can totally chat someone's ear off if I feel safe with them. (It's a mark of how the divorce has caused me to close up even more that the phone plan I used to have gave me unlimited minutes and I would use over two thousand a month and I now live comfortably on less than 450 a month.) So I actually try to say 'hi' to people I pass in stores, compliment someone or just say something basic to start an interaction. I have started conversations at church with members that I don't know (sometimes I have started them with people whose names I should know after a decade but I still don't and I am too embarrassed to ask.) And I have worked to try not and shut down conversations as much when unknown people start them with me... I''m working on it and its getting a little easier I think.

So the other night, I was headed home from work and decided that I would do my once weekly 'spontaneous' grocery shopping. Once a week, I head to a few different grocery stores and only look for the 'marked down' basics – fresh fruit and vegetables, dairy products, meat, salads, etc... I am never sure what I will find on these trips and sometimes I find nothing or just a few odds and ends. And sometimes, I come home with salad and veggies for days, some meat and fish, yogurt, milk and sour cream... and even maybe some soup or some beat up cans of tomatoes. This trip is a fun trip- an exclusion for me that doesn't cost me much and helps me to have fresher things to eat on my small income. It's also fun to see what I can find and then create different meals to cook and consume the food. Being able to have this opportunity has been such a blessing and really has made it possible for me to eat pretty well on my income. So I left the first store and started driving to the second. I parked, limped in and started the 'rounds'. 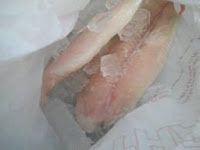 After a quick look through the produce section, I headed over to the seafood section and quickly noticed a decent sale on haddock- $1.99 a lb! I stood at the back of the line and found myself grinning a bit more when I watched everyone else in line buying the more expensive fish and the price to the haddock was changed to 0.99/lb in the hopes of moving the last little bit before the store closed. The woman in front of me completed a fairly complicated fish order and moved out of the way so that I cold place my order. I order three pounds of the good stuff and, as they wrapped up my order, the woman who had been in line before me started a conversation with me. She asked what I was going to do with my fish and I talked about my plans for it – I thought I would fry up a pound with lots of bell peppers and broccoli and put the rest in either soup or make it into sandwiches. She introduced herself as Donna and shared her amazement that I could make fish into something that sounded wonderful so easily. And so I stopped with my basket... and Donna with her cart and we chatted. I told her about other easy ways to cook fish- one of the few things I am really decent about cooking- and she decided to get some fish for herself. I moved on looking through the meat department and was headed to the front of the store when she caught me up again. Donna thanked me and asked how I decided when to buy something and so I told her about my trips. I talked about some of the places in the stores where they 'hide' the markdowns and how I decided something was a good value or not. 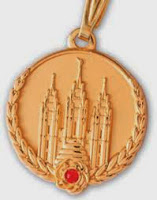 It was during that conversation that Donna looked at my neck and asked about the necklace around it. I looked down and asked her which necklace she was asking about (I was wearing two) and she pointed at my gold chain with my young women's medallion hanging down at the end. I've actually never had anyone ask me about it before and, as I felt myself close up, I took a breath and told her about it: what it is, what it means, how I earned it, and how much it means to me as a symbol. Donna then asked what church has such a great program and I said those words that open the door to potential trouble - “I'm a Mormon.” Her response was quick and so unexpected to me - “Oh, like Glen Beck!” - that I didn't school my face very well and my feelings of dismay and annoyance must have been seen clearly on my face. She stuttered and said, “Well, I mean not like Glenn Beck, but you belong to the same church and stuff.” That I agreed with! And she asked me more and listened respectfully and asked a few questions of me that I think she must have gotten from conservative talk radio (probably from the formerly mentioned) and I told her the doctrine I have learned and my beliefs in it. She told me about her church and I asked questions about it and she answered and when we parted, she thanked me again for the shopping information and for chatting with her and hen said something totally unexpected to me.

“God bless you! I am so glad I ran into you today!”

I finished my shopping and went home with a lot to think about. Even a few weeks later I am still thinking abut it. I am glad I took the risk, thankful that it didn't turn into a really painful experience that would bring my anxiety to the forefront of my mind again. And I feel able to try and do it again. But most of all, I feel like I have started a relationship that over time can turn into friendship and even more. I am so thankful that I have accomplished and earned my medallion and grateful that I found the courage inside of me to talk about it. You just never know when you can testify of Christ... you can share his love anywhere, even next to a counter of cheap fish. :)

Posted by Badgerdown at 6:11 PM