Did the Russian State... Part VIII by Nils Johann (The Circumstance of the Two Ruling Houses, and their Nobility) 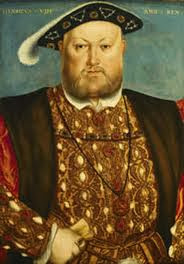 Henry VIII Tudor (*1491-†1547) took the throne in 1509 as a young man, 17 years old. He was not supposed to become king, but his older brother, Arthur, had suddenly died. Leading up to this point in time, England had been a unruly place, where only 25 years earlier, feuding nobles had been tearing the realm apart. The House of Tudor, was the product of the alliance by marriage of the Houses of York and Lancashire in 1486. A compromise that symbolically ended the Wars of the Roses (1455-1485). They had been in open conflict since 1399. 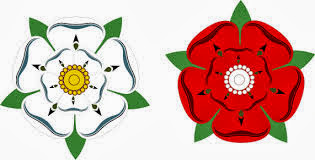 These Wars of English succession, had happened shortly after the wars for French succession, also known as the 'Hundred Years War'. The 'English' (Normans) withdrew from the continent and relinquishing their prospects to gain the French Crown. The wars had strengthened the Crown, vis-a-vis the Barons, establishing large military forces under direct control of the Monarch. Having standing armies is of course expensive and having them, it probably did become a great temptation to utilize them in order to 'resolve' the claim to the English Crown. Henry’s father Henri VII Tudor (*1457–†1509) had won the title of King by waging war on Richard III (*1452–†1485). He was killed by Henri's henchmen during the battle of Bosworth field in 1485. Henri had after that, tried to confiscate all lands belonging to supporters of the late King, by declaring himself King retroactively, making his opponents traitors. During Henri VII's reign, he four times faced larger rebellions by the Barons, triggering a crackdown on their right to keep 'private security forces'. Harsh realities like these are not easy forgotten by the young King and his advisers, and one can in his actions during his reign, see a constant maneuvering in order to keep the nobility at bay. 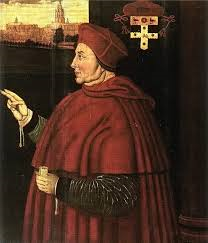 One of Henry VIII first actions was to 'cleanse' the Nomenclature of The Crown, of some his father's advisers that he disliked. The Yorkist 'White Rose Party' could still challenge Henry VIII for the throne and in 1513 he had Edmund de la Pole, the leader of the 'Party', murdered. Henry constantly worked to intimidate the members of the high nobility. In the following years he also had Henry Brandon, the Duke of Suffolk and Buckingham, indited for 'treason' by his Minister, Cardinal Wolsey. He had Brandon murdered in 'The Tower'. Wolsey would in the end suffer the same faith, and the same is true for the man who was to fill his place, Thomas Cromwell. The corpses in gibbets, or the head of these “traitors” on a spike, would often greet visitors who entered London through Tower Bridge. It shows the ambivalence of relations, between the Crown and its supporting nobility, as we enter an age of more powerful monarchs, that are increasingly able to rule without the political support of the high nobility. This tendency, we can also observe in Russia. From 1237 until 1240 the Rus princes had been overwhelmed by the conquering Tartar armies of Batu Khan. Kiev, the cultural capital of the region was razed. Other parts of the region, like Moscow, were only sacked. The Rus Principalities were made subsidiaries to the vast empire of the Golden Horde. In the same period the cultural centre of The Orthodox Church, and the central trading partner of Kiev, Constantinople, had been conquered and occupied by Latin “Crusaders” from 1204 till 1267. During the suzerainty of the Horde, a small difference in the customs of inheritance in Moscow allowed for the most eligible prince (though usually by primogeniture) to inherit the major share of property, unlike other parts of the region where every heir got an equal share, and the estates were divided. 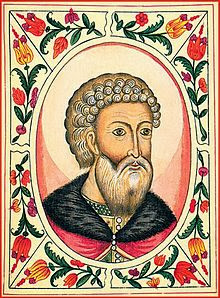 By the time of Ivan III (*1440-†1505) the Tartar suzerainty was beginning to properly disintegrate. The Horde had started breaking up into several feuding parties after an interregnum in 1410. He exploited the situation to further expand the dominion of Moscow, unifying a vast Rus territory under his rule. In 1472, he took as his second wife, Zoe (Sophia) Palaiologina, the niece of the last Roman Emperor. The family-crest of the Palaiologians, the double-headed eagle was adopted by the grand princes of Muscovy. In addition to bringing with her a grand number of technocrats, there was also the baffling amount of eight-hundred books in her baggage, further strengthening the technocratic bond between the 'Second'- and 'Third Rome'. The library is supposed to have contained works of law by Constantine 'The Great' (*272–†337), and Justinian I (*482-†565), and several 'princes mirrors'. Vasili III (*1479-†1533) son of Ivan III and Zoe took several steps at defining his reign as continuation of the Roman Empire. In Zoe's retinue followed, artists, physicians, and politicians, who were well connected to the general developments elsewhere in contemporary Europe. There are many cases of integration of both, talented Greek refugees and other artist coming to the land. It is interesting to note the both Henry and Ivan, amongst other precedence, base their claim to autocracy on the Roman Law of Constantine. The Byzantine influx spurred after the fall of Constantinople in 1204, may very well have been a large contributing factor to the Renaissance, as Roman-Greek technocrats traveled westward, and northward. 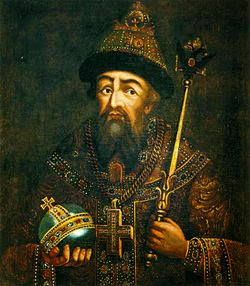 Ivan IV is born near Moscow on August 25th 1530 as the only son of Vasily III. His father passed away when Ivan was only three years old. By the leading Bojars, Ivan was accepted as the legitimate heir to the throne. He was proclaimed Grand Prince of Moscow, while his mother Yelena Glinskaya acted as Regent in his place. After Ivan had turned eight she died. Maybe naturally, maybe by poisoning, initiated by a noble faction biding for power. Other different factions in court started biding for power and influence. The next decade was a time of political turbulence in Russia. Three, and at times more, Bojar 'parties' used this period to try and gain political superiority over each other. They gravitated around the families; Shuiskii, Bel'skii, and Glinskii. Ivan had been eight years old, alone, and at the same time surrounded by power-grabbers pretending to the position of Regent. They had schemed, plotted, and murdered, and used violence to attain their goals, and thus it is possible that the nobles had made a bad impression on the young Prince.

Ivan had slowly started to take command as Grand Duke at about age thirteen. It seems that Ivan stemmed the bickering, by having a Shuiskii Prince torn by his hunting-dogs in the Kremlin- Square. In political terms, we call that establishing credibility. Just like Henry, Ivan had to use force and terror to get his Barons in line, in order to lay the foundation for future negotiation.

After he turned sixteen in 1547, Ivan was Crowned as the first 'Czar of all Russians'. In the first years of Ivan's reign, reforms were made to gather more power around the Sovereign, centralizing government and formalizing and reformulating acts of government. Like in other domains in Western Europe, a move away from feudal structuring towards an attempt at central bureaucracy was in formation.

The similarity that we can recognize, in the background of the two rulers, is that their position is the result of preceding conflict between their respective houses, and other noble families. Their realms had been formed by the use of organized violence and were maintained by the use of force...deadly if need be. This is nothing especially original. An anecdote from Herodotus' Histories comes to mind, that might illustrate this. It is a story about Thrasybulus, the Despot of Miletos and Periander, the Tyrant of Corinth. Periander sends a messenger to asks Thrasybulus for advice on ruling, and on how to stay in power. Instead of responding verbally Thrasybulus takes the messenger for a walk in a field of corn.

“he kept cutting off the heads of those ears of corn which he saw higher than the rest; and as he cut off their heads he cast them away, until he had destroyed in this manner the finest and richest part of the crop.”

The messenger conveys what he had seen happen, to Periander, adding that he has doubts about Thrasybulus sanity. The message was still correctly interpreted by Periander; a wise ruler would pre-empt challenges to his rule by removing those prominent men who might be powerful enough to challenge him. “...to put to death those who were eminent among his subjects.”

It is the simple story about how power is taken and maintained and it is foolish to assume that not any person of power operates in this way, because social bonds are fragile. It is perfectly rational for a monarch to harbor some resentment towards nobles because he often would be in economical counter-conjuncture to them. More 'taxes' for the monarch would mean less for the nobles or vice versa. It would also be rational to feel insecure about them as they, (the other wealthy and powerful families,) were the ones the Monarch had to rely on for the stability of his reign. Monarchy (Autocracy) is a 'reference-system' for organization and order, no-one has, or will ever, rule alone.

Posted by Badgerdown at 4:58 PM