Did the Russian State... Part XI by Nils Johann (Their Great Heists) 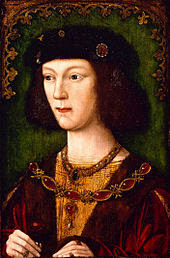 Henry's father had already appropriated the holdings of prominent opponents in the past, stealing land under the guise of legality. Already during the prominence (1509-1529) of Cardinal Wolsey (who at the same time was the Papal Legate to England), the dissolution of thirty monasteries had taken place (1525-6), under the charge of 'corruption', their estates fell to benefit The Crown. This can however only be seen as inspirational pilfering, compared to what was to follow. Facing tax-rebellion and strikes by 1525, and having exhausted the state's economy for prospects of re-conquering English claims in France. Henry had no other choice than to seek peace, putting at rest military ambitions for the following decade, until he, and 'Lord keeper of the Privy Seal' Thomas Cromwell, (*1485–†1540) 'lash out' against The Church. The Acts of 'Suppression of Religious Houses' were forced through Parliament from 1536 up until 1539. In 1534 Cromwell had established an office that made a tour of appraisal, to estimate the worth of the monastic holdings. The holdings were made up of about a quarter of the real-estate in the realm. They started by appropriating the smaller estates. This spurred quite a large resistance. Resistors were to be gibbeted, hung, or drawn and quartered. This amounted to a larger rebellion. After it had been 'struck down', all ringleaders were executed, even though pardons had been offered and their demands had been accepted. To establish credibility the Abbots of Colchester, Glastonbury, and Reading, were hanged, drawn and quartered, and many were harshly punished and killed for their treason. The premise was established for further seizures. When it was finished, over 800, of about 850 monastery-estates, had been appropriated. The 'Coffers' of The Crown were now filled for military campaigns. But Henry still waited several years, most likely because of the internal disruption the attack on The Church had caused. This solution to economical problems seems similar to what Ivan tried to accomplish with the 'Oprichnina' (1565-72).

I have not been able to find any specifics on the Russian tax-codes of the period, but the sheer logic of the Oprichnina gives the impression that there were similar principles for allowances to monarchs in Russia, as in England, and other 'emerging bureaucratic states' throughout Europe, and maybe further east as well? As the Monarch was the one responsible for foreign policy, he could levy tariffs or tolls on foreign trade and some industries, like mining, and further, in connection with minting or arms-manufacture. Besides this, the Monarch would rely on his personal domain-land to keep the Crown outfitted.

The Oprichnina was set up during a period of intense border-wars threatening to overrun the Russian Empire. It consisted in large part of 'newly' conquered Novgorodian territory and the region of Vladimir. The story starts with Ivan, frustrated by the politics of The Capital, withdrawing to Alexandrova Sloboda. There he goes on 'strike', destabilizing the ruling council, and agitating the citizens of Moscow against them. After some negotiation, the noblemen agree to grant Ivan absolute unchecked privileges in the 'Oprichnina-territories to be'.

The Livonian Wars (1558–1583) were in part a result of Ivan's will to expand his sphere of influence, to gain foothold on the Baltic shore, thus avoiding the restrictions put on Russian trade by the powers controlling the Baltic ports. This crashed with the strategic ambition of several powerful neighbors holding a stake in the disintegrating fragmented Baltic territories. The Oldenburg, Vaasa and Jagellionians, with the Habsburg, the Dutch, and the Hansa meddling in the background, wanted 'a piece of the pie'. Tension between opposing forces is a given in power-games. Crummey does overestimate Ivan's role in what was to happen. In Crummey there is a blindness being cultivated towards, that the other actors in similar manner had aggressive ambition, almost as if Crummey postulates, that Ivan could have chosen peace? Statements like that, again make me reach for my Machiavelli:

“The Romans, foreseeing troubles, dealt with them at once, and, even to avoid a war, would not let them come to a head, for they knew that war is not to be avoided, but is only put off to the advantage of others.”

Leaders at times, just must lead, but the lack of proper sources does not stop Crummey from painting a grim picture. In his work the method to the madness of the Oprichnina is to be found in Ivan's sick paranoid mind. Crummey makes it easy for himself when he states, that since the conspiracies against Ivan are so poorly documented, they probably were figments of his imagination.

"The image of Ivan as a paranoiac lashing out blindly and none too effectively is well drawn by Crummey. Undoubtedly the greed, bitter internecine rivalries and self-importance of the Boyars were injurious to the efficient functioning of the administration and contributed significantly to Russia's failures in the Livonian War." 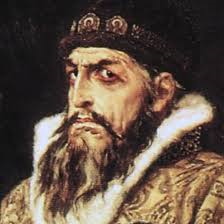 The first thing to say about that is, that if people are proven to be disloyal to you, and they try to get you... you are not paranoid, but you have a healthy instinct for caution and survival. Crummey is at times exorbitantly hostile in his treatment of Ivan. This belittles the direct practical application of this attempt at bureaucratic management. The direct control over resources needed to wage war on the surrounding enemies, gathered in one chain of command does not seem like the plan of a madman, because it in principle is rational, as argued in Pavlov and Perrie, who also further develop the idea of Ivan as a contemporary renaissance-prince. 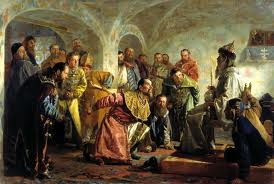 The Oprichina was however a large land-grab that was bound to threaten the position of all 'Gentry'. They are the main source for description of the event. Gathering large domains in the 'hands of the Crown' theoretically reduced the need to negotiate with the lords and the gentry over the pressing needs of war, aiding to streamline the strategic depth of operations under a clear command structure. In order to enact this 'bold and courageous' change in policy, a new branch of government was formed. Its officials, the Oprichniki, were enlisted from the ranks of 'free-men' while a few were noble. They proved more trustworthy to the Monarch than the Bojar Class, since they had less power and claim, to challenge or obstruct his rule.

Henry and Cromwell had two advantages when they started to plunder The Church. When the land of The Church had been appropriated, it was sold to the loyal segment of The Nobility, firming them in their resolve against The Church, and implicating them in the new order. Their payments then filled the King's 'war-chest'. Henry succeeded, and was ready to subdue the whole of Britain. The other advantage was that Scotland is not The Steppe. It is not a 'never-ending' expanse. It still can make one wonder, if Ivan was not inspired by Henry's success. We know there was direct contact between England and Russia from about 1540. 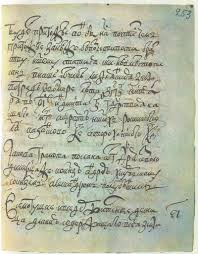 Judgment on why the Oprichina was dismantled is difficult. Letters written by a discontented mutineer like Prince Kurbsky, portraying Ivan as a tyrant, do not compare to a modern day 'aircraft black box'. It is hard to differentiate the factors leading up to the dismantlement of the Oprichina-system. Was it a system that was internally weakly constructed, or did it fail due do the external pressures of a three front war in combination with natural crop-failure? It is wise to respect that 'force major', nature, is dubbed so for obvious reasons. -that Xerxes had the Hellespont whipped, did not bring his fleet back. That the Crimean Tartars burnt Moscow might have been a tipping-point. De Madriagda suggests that the system might have fulfilled the purpose of breaking the 'grip' of the Bojars. Enough credibility had been established to unite the territories, under a reformed Bojar council which included many of the leading Oprichniki as well. Both the 'Acts of Suppression', and the establishment of the 'Oprichina', lead to an accumulation of lands, in the 'hands' of the Monarch, and to the weakening of his opposition, both nominally and relatively. Neither of the systems permanently gathered the land with the Monarch, but they permanently established a principle of supremacy.