Did the Russian State... Part III by Nils Johann (The Myth of 'Oriental Despotism') 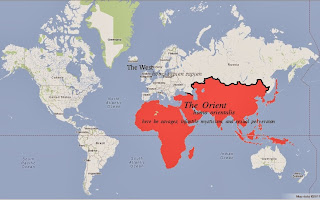 We tend to look at the Eurasian landmass and then we single out about a 5% of it. We say; this is freedom, enterprise, 'development', in complete opposition to the other 95%, ruled by Oriental Despotism. That these other nineteen twentieth, should be no more or less special, or equal, in their 'strangeness' seems to be rather more likely. But this is not what is usually seen, when we talk of this mythical difference, between two more or less incomparable units. It is not amazing when travelers in the 16th century find new places to be strange, but this does not make these places more strange for us looking back through more than four-hundred years of passed time. The Work of Goldstone, like Frank's, points in the direction that there might be serious errors in how 'The West' and 'The Rest' are presented. These errors skew our understanding of our history in general. He suggests an alternative interpretation: 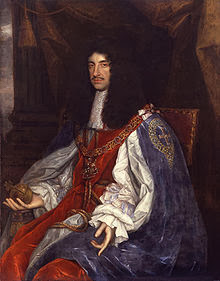 “The California school reverses this emphasis and sees Europe as a peripheral, conflict-ridden, and low-innovation society in world history until relatively late. Superiority in living standards, science and mathematics, transportation, agriculture, weaponry, and complex production for trade and export, has multiple centres in Egypt, Mesopotamia, the Indus Valley and the Yellow River Basin. From these regions civilization spreads outward,...while western Europe remains a primitive backwater. When civilization spreads West with Carthage and the Roman Empire, it remains rooted in the Mediterranean and then—with Byzantium—in Anatolia.” “Except that something goes haywire in England. Charles II dies without an Anglican heir, and the throne passes to his Catholic brother James.”

We should not interpret this as a straight forward dissemination theory because that would be unoriginal, but as a more complex gradual transplantation, or adoption, of tools and technique for government. This then fits rather well with Gerhard Spittler's explanation of 'despotism' and how it has worked. And Spittler's 'despotism' is not the mythical 'totalitarian', 'oriental despotism'
-understanding of the word of Wittfogel and Ferguson.

How 'despotic' is 'The East' really in comparison to 'The West'? The question is interesting because Spittler diagnoses 'despotism' to be the management-form of primitive state-structures. 'Despotism' is described as a rule over farmers with a military-state, that has little developed bureaucratic structures, or codex laws. - as an opposite of 'bureaucratic government'. Spittler, however, found that Prussia of the 18th century, and West-Africa of the 19th century compare rather well in this regard. 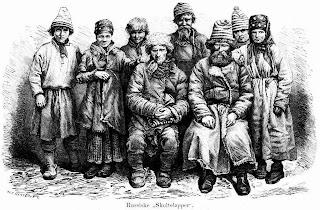 “The peasantry in a peasant state is characterized by a great diversity of local customs and by defensive strategies. Both are related to peasants' semi-autark household production. Under these conditions the central government lacks information and the means of control. Administration by intermediaries and despotism becomes widespread because it is well adapted to this situation. In order not to be infected by the “chaotic diversity” in the countryside, the bureaucracy maintains its distance from the peasants. But on the other hand, it also tries to penetrate the peasantry. Bureaucratic administration requires the collection and storing of information, so a precise census is a basic tool for bureaucratic work.”

As an extension of this, we can assume that almost every state, until the development of industrial society, were peasant states, trade being, in general, marginal. The road away from despotism, to a more bureaucratic state, with more order, less random violence or ad-hoc power, is similar. This would in turn mean a tempering of the aristocracy and the centralization of power to the Crown, as it again, from the period after 1450, increasingly happened in all of Europe. Mind, not as a straight progression, and not at all always successful.

The portrayal of the “oriental despotism” therefore seems methodologically unsound. The theoretical separation of 'The East' and 'Western Europe' seems to be creating some confusion when it comes to understanding the workings of reality, rather than being helpful in this regard, as a theory should be. To help us along it might be helpful to summarize some scientific theorems. A false dichotomy arises, when the premise for the given research proposes that there are only two possible outcomes that are mutually exclusive. With the induction of such a premise, we run the risk that maybe both outcomes are wrong, or that they are not mutually exclusive. The danger for research-work, premised by a false dichotomy, is that it may lead into a falsity in logical reasoning. The result could be misguiding, leading us to make wrong conclusions. The false dichotomy is therefore also a common rhetorical technique, where only two choices exist, only two real alternatives. A false dichotomy can just as well be an intended fallacy, created in order to force a decision where none of the alternatives, are necessarily the correct choice.

The western rim of Eurasia is more similar in its development up until about 1800 than might seem palatable. Splitting Russia off from the state-formative processes taking place in other locations alongside 'The Rim' therefore does not serve the purpose of gaining understanding, but causes alienation. The terminology in use for later periods still puts the “dictatorship” of the USSR next to its 'imagined-free', NATO opponent, in an imaginative exercise of a combination of hypocrisy, avarice, and ignorance, that trumps any nuance. In the same manner the brutal occidental Barons of late medieval Europe are painted to be 'Arthuresqe' figures of myth next to the bloodthirsty oriental Despot.

Posted by Badgerdown at 6:25 PM