The Small Blessings of Love and Service 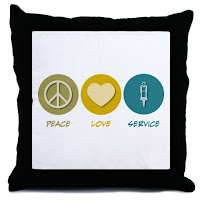 I was blessed today to get to do some volunteering at the local food pantry. The love and amazing spirit that these people have is just phenomenal and is always so inspiring. I can go in feeling sick and tired and just unable to really 'think'- almost hunched up physically by my burdens... and then walk out three hours later, laughter still ringing in my ears, shoulders straight and the motivation and attitude to tackle the next problem that comes by. The feeling that I get from helping others at the food bank is one of the best feelings that I have ever known and sometimes find only in the temple. I hope that service will always be a big part of my life.

A quote I read in one of my textbooks later in the day keeps coming back to me - "Giving love is receiving love- In order to experience love, you must be vulnerable to it. When love is given away, it remains with you as well. In fact, love is unique in that the more you give, the more you will have to give and the more that you will receive."

With a smile on my face, I end my day … and wish that I could volunteer everyday!
Posted by Badgerdown at 8:21 PM No comments: Links to this post

What would you do...? Thoughts on Tolerance and Sexuality

I wrote this post for my human sexuality class. I know that many people will have strong opinions about my thoughts. I am happy to have a honest and appropriate discussion with anyone who wishes- but please... keep it nice!

I have tried several times to think about how I would react if my child was a homosexual. I think that my reactions over time have changed a bit.  As I have grown older and seen more of the world (and been judged pretty poorly by some people for being who I am whether I am not following gender roles appropriately, etc...), I have tried to err more on the side of understanding and tolerance.  I have found too many times in my life that I have not understood or been intolerant in ways that have caused pain to others, pain and disappointment in myself, and really haven't found anything positive but maybe my own growth in knowledge and a determination to try and not make those mistakes again.  I am aware that my religion is not accepting of homosexuality and most of my extended family are not accepting as well. I am also aware that my religion is not only very intolerant about this issue, but has members that are extremely intolerant and hateful. Reminding myself that they are really confused and fearful individuals doesn't really help as I don't think any human being should have to deal with senseless hate.

What I do know is that I love my child and I cannot imagine anything he could do that would cause me to love him less. And so many of us as parents have read our young children the books about how much we love them and that can never change...no matter what they think or do. I think that some people can have conditional love for others that can actually be harmed by behavior... but I think that most people do not. I just can't imagine (at least for me) turning off my caring for my child because they are different. (In so many ways, aren't we all different?) So I like to think that I would be extremely tolerant and understanding and supportive. That said, it is really easy for me to say that in my position. My son is almost nine years old and developmentally delayed- the idea that I might need to actually practice what I am thinking is so far away... or at least it feels like it is. And I have been told that I am the most generous and tolerant person from some friends who have made it very clear that my behavior towards them is a rare gift for them... which doesn't make any sense to me as we are all people, right?

So, if my child did come up to me and told me that he was gay... I like to think that my first response would be to say 'that's wonderful'.  I don't think that it should really matter except how it matters to him.  I like to think that I could express my gratitude for the trust that my child was showing me and that I would be supportive and caring- just as supportive and caring as I have always been. I do think that maybe one thing that I need to think about... maybe instead of just making sure to keep highly hateful people away from my son, maybe I also need to make sure that he is able to see positive examples of homosexuals around him... so that no matter what sexuality he finds that he 'feels'... he will know that he is OK and cared for. I can't imagine loving him any less and I can't imagine not standing up for him and his choices in front of ignorant or hateful people. I also cannot imagine the sorrow that other parents feel when others hurt their children... or cause their children to harm themselves. I hope that my child feels that he can be who he is and that I can support him in that- no matter whether he is heterosexual or homosexual, whether he follows social gender roles or not, whether he is religious or not,... I hope that we all can.

I am not sure that any of us can know how we will react until we are faced with it.  But I think that thinking about how we would react is a great first step to understanding how we feel so we know how we are most likely to react and confront our confusion, fear, or ignorance head on... which I think would be great just to understand ourselves better... and being able to help our children and others is an added bonus!  :)
Posted by Badgerdown at 8:03 PM No comments: Links to this post