Angry Fruit : Before the Birds (Commentary on the “Grapes of Wrath”) 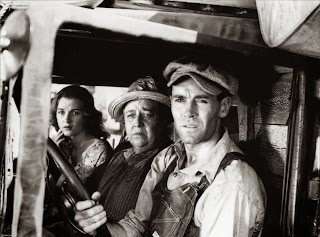 When I was in high school, I was introduced to the novel “The Grapes of Wrath” written by John Steinbeck. A masterpiece of depth and feeling wrapped around the story of a small family in the environment of the Great Depression. There are so many aspects to the story that are worthy of note, conversation and introspection, for even today the lessons that the author intends us to learn are still questions and attitudes that we struggle with today in our society. As a high school student, I was intrigued and saddened by the story of a young man fresh out of jail who goes home to his family to watch and help as they are forced off their land, struggle on to California and then to find himself an outlaw for his actions as much as for his place in society and the powerlessness of the many underneath the crushing heel and whim of the few. It is a symbiotic relationship that humanity aspires to- one of equality and opportunity for everyone- that we as humanity may never reach. So I thought that I would focus my thoughts not on the story or the lessons themselves that were brought to my mind again in this class, but to peer into the thoughts and images of my mind that come with the quotes that stuck in my mind long after the initial hearing of them. 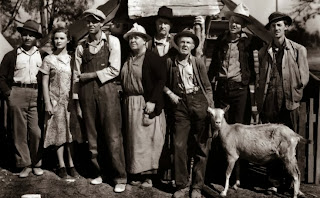 While growing up, I would hear the words of the people around me talk about how hard work can get you anything in life you want. How being good and motivated and virtuous can make you rich, get you the things that you want in life and make life generally pleasant and easy. A part of those ideas have never made sense to me as I struggled to find a way to understand life, people and relationships in the dysfunctional household that I was to reach adulthood in. And as I have studied and watched many different kinds of people that have flitted in and out of my life, I have realized that those words only had a brief kernel of truth in them. With few exceptions, the only way to reach the ideal of wealth and a life of your choosing the individual must also be lucky enough to have a good background, a family with enough resources to get them the education, health and the resources that allow the 'hard work' of the individual to get them their desires. For the majority of humanity, especially women and those of a minority class... those are blessings or luck that no matter how hard they work, the individual will not get. The majority of people wish to own land, to own things... in fact, many of us derive our base worth to ourselves based on these things – what we own, what we do for a living, etc... Owning things gives us a feeling of security, safety and a sense of worth, but for most of us everything we 'own' is actually owned by a bank and we will spend our lives paying for those things. A wrong move- a recession, a lay off, a disabled child, etc... and we fall and break. No amount of hard work can save everyone in these situations no matter how good they are. A sad, but true fact.

Ma Joad - “There was a boundary to us then... there ain't nothing that keeps us clear.... There ain't no family now.”

“How big the country is … How small we are.” 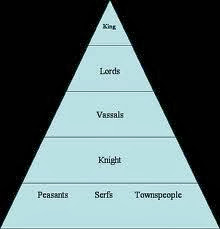 In the study of history, we can look at the hierarchy of the medieval world with an understanding of place and power. To whom you were born set up the course of your life and no amount of motivation or work could change that. If you were a prince, your future was fairly set... you became a king, died as a prince or lived a life at court with its specific sets of rules and responsibilities. If you were born to a serf, then you were a serf for life... almost no exceptions. There was no intermarriage between the different groups of classes of which there were usually considered three – the nobles and monarchy, the clergy and church, and the 'rest' of us. With the French Revolution, and the other revolutions and uprisings that happened in the western world in the late 1770s and later years. For the lower classes wanted to have more opportunities open to them. So we come to ourselves and today. The struggle for equality has given so many more people opportunities to rise and the lines of hierarchy have become blurred. However, the lines of power and wealth have not blurred much allowing only a few more in and keeping the rest of us in control by the ideals mentioned above. If we all think that we can also be successful by working hard, then we are less likely to band together and recognize the true reality. And the reality is that as we have gained more rights for women and minorities we have also lost some as well. However, what we have lost is mostly something that we 'think' we had yet maybe never did. We have lost the concept of family and what are duties are in it. So we argue about what constitutes a family today but only when it comes to a few things. Other things break the family apart- economics, society, but we argue about 'what' constitutes the family itself. Our generation looks back and sees a 'rosy' past... that never existed. We as individuals struggle to understand our place in the world, our collapsing communities and our responsibilities as members of the human race. Our perspectives of the world and ourselves are what we use to wade our way into the waters of our futures... to keep our place and an understanding. Otherwise, we worry about being swept away in the crowd and that vastness of the world around us. We try to control and create order in the things that we can... to feel the security and serenity we crave.

Preacher - “There ain't no sin and there ain’t no virtue. It's just what folks does....” 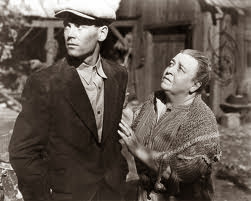 When things go wrong in our lives and the world, we tend to look around for the scapegoat. Humans have done that for so long that many people do not even understand today what the origin of the term actually means or how it came about. (It is from an ancient Jewish tradition in which the sins of the people are figuratively cast onto a goat and it is driven away into the desert to die as a part of the rituals alined with the Day of Atonement). If we look at psychology, we see how easily we find reasonable excuses for our own poor behavior/mistakes and yet we do not tend to allow others the same leeway for the same behavior. So we throw the evil and guilt we feel in ourselves out and project it towards others hoping to alleviate our suffering and to feel 'pure' again. So all of us continue to do so... and so we distract from real issues by pointing our fingers at others. Republicans point at the debt ceiling and big government and keep us from looking at the facts that the middle class is declining, the poorer classes are swelling and almost all economic gains are going straight to the top one percent. Democrats complain about the republicans but do not do anything but complain. Independents have no chance because of low numbers.

Conservatives blame homosexuals and their behavior for breaking up the family and proclaim abortion as murder, but they do not tend to adopt, to help children in foster care... to create a supportive society that would make abortion unnecessary nor to they acknowledge the good and the benefit of homosexual marriage. Liberals fight for the right to marry for all and for available abortion, but do not seem to acknowledge the fears and concerns of the other side and dismiss them... which tends to bring both sides even farther apart and to continue to demonize each other. Marriages break up and both sides point to the other party – friends and family split off into sides like there is something to win. Our perceptions and views on life and people color how we view the world, how we blame others and how we see our future possibilities.

Gas Station Attendant – 'A human couldn't stand to be so miserable.' 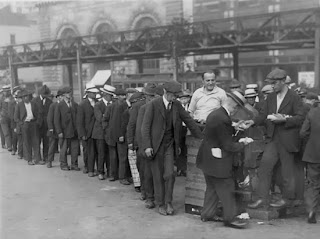 The Great Depression was a horrible time; a time of hunger, homelessness, and despair for most. People would do almost anything for any security or food. Those with money had the power over the lives of thousands. Severe conditions tend to make most of us fall into the physical and emotional traps that stress caused. We are less rational, less able to think, more desperate. Good works, intelligence, decision making and emotional control are the losers when our body is under stress for long periods of time. In desperate times, we can hurt each other- even those we dearly love- to gain a few morsels of food if we are so very hungered. We can break every virtue we believe in if we are desperate enough. We are currently living through the storm of recession and social change... a time where moderation doesn't seem to exist and being kind can be challenging. Daily, people are dying from torture, bombs, etc.. based on blame- the blame of religion, politics, or simply being in the way of other's viewpoints and motives. The Great Depression was in many ways so similar to what we face today...yes, we have more food (in theory) but the storm of culture, wealth and power, and change continues today. How will it end... I wonder.

Posted by Badgerdown at 6:33 PM