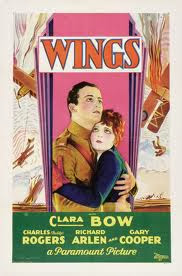 So this week, I was able to watch most of a remastered film called “Wings”. It was a 1927 American action silent film (all words were written in borders) that starred Clara Bow, one of the great early actresses of film. The film was an original black and white, silent film w/ dramatic narration and some remastered affects that had been added (such as the orange, red plums form the back of disabled planes crashing to earth.) While this film was mostly based on war – WWII in particular, it had several aspects of the script and directing that I found interesting and worthy of analyzing and extra thought.

Clara Bow mentioned once that she felt she was put in the film because she was the studio's most popular actress and that the film didn't need her... but I will say that I loved her in the film and I'm not sure the film would have had the same 'open' flavor that I felt it had with her in it. To be blunt, I don't think it would have been at all enjoyable for me without her in it. It was her expressions and her feelings toward the character Jack Powell that actually drew me into the film and caused me to have interest in the film at all. Clara played a character called Mary Preston who found it very challenging to hide her feelings and love for Jack Powell. Jack was very attracted to another girl named Sylvia Lewis, but Sylvia is in love with a boy named David Armstrong. The boy's rivalry follows them when they both enlist in the Army to be fighter pilots and only after some tension do both David and Jack find a way to get along and become friends. The movie plot follows these two young men through the war as well as Mary Preston and how the war changed them. I highly recommend taking the time to watch it if you have the inclination. 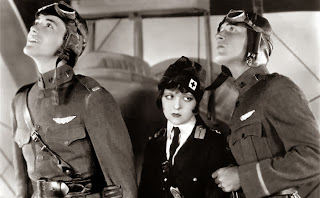 One of the acting techniques that silent films needed to use in the past to help the viewers understand the plot of the film was to use written narration. When parts of the plot needed to move along faster, a little music and some written words could not only change the scene but also lets us as an audience know exactly how everything had changed- environment, situation, etc... In our current media, much of what we use to help move plot and emotion along is words. Films also use body language and facial expression, but words and sound really matters. Many films use sound and facial expression to help us to realize the thoughts of the characters we are watching. This film being soundless had only two options to let the audience know what was going on- the narration and the music... or the body language and facial movements. Pantomime is a wonderful skill and I felt like the written language in the film wasn't very useful to me... I felt pulled into the story through every movement on the character's faces. These actors used everything they had to express what was in their head and I felt like I could understand the words that that were said – even though I couldn't hear them- I could understand just from their faces and their eyes. Most of the emotions / thoughts that I could feel coming from the actors that helped me to understand what was going on seemed to come from directly from their eyes. At one point I found myself staring at Clara Bow and felt pulled in... sucked into her frustration and sorrow over Jack, fear for his safety and excitement over her new opportunity to drive which opens up her world a bit more. That skill- it is definitely a skill- is something that most actors these days can't (or at least don't) do. I wouldn't be at all unhappy if I found some time to finish the film outside of class. :)

So what silent films have you seen? Do you have a favorite? If you have watched this film, what did you think about it. This was my first introduction to Clara Bow and I would love to watch more things that she starred in. I felt like she was that good! Please share your thoughts... :) 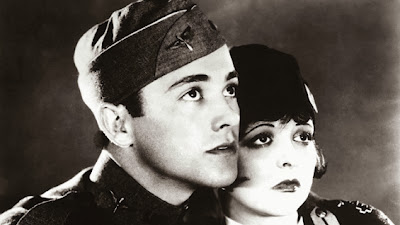 Posted by Badgerdown at 7:09 PM