Brief Thoughts on the Industrial Revolution 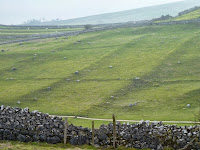 Almost all of us who have studied a little history have heard the term “Industrial Revolution” and have the basic concept of what that term means. What I find most interesting is what that term tends to leave out without deeper study and what it shows about us and the ways we as human beings and historians think. Because the term tends to suggest only huge alterations in 'industry' or business... and not in much else. However, during this time of changes many ways of human's lives in Europe changed in drastic ways and for the majority of people, not just a small group of few. These occurrences started to happen in society around 1750 may have started small but quickly made huge changes that could be seen in a short period of time. These changes can be easily seen and divided and described in four categories: industry, commerce, communications and agriculture. The first country in which these changes started to roll forth was Great Britain. If you look at some of the reasons that this country was able to step to the forefront, we can surmise some of the things that we need today to help other countries be able to expand – will talk about these advantages down below. :) One of the first things that seemed to start the 'revolution' was that large landowners in England started closing off their lands and as this practice became legal with the passage of Enclosure Acts, this process left hundreds of poor peasants without land to farm or work. 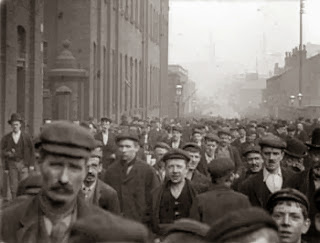 It was the process of removing the serfs and peasants from the lands that brought people to the cities and helped create a large, available and cheap work force. This created more demand for goods in the cities as well as work. So wealthy merchants or others could try and increase production to meet this demand which would in turn create more jobs. This also created the challenge of how to feed a large population with fewer people actually farming which had been the norm in times past. Agriculture changed a great deal with the Enclosure Acts as the large landowners could now farm very differently than has been accomplished in the past. Instead of several small plots of land farmed by families, a landowner could now farm hundreds of acres and instead of a variety of crops, the farmer could choose to focus on two or three popular and ready to sell crops. These crops could then be sold to feed people in other areas, to create other goods to sell such as cloth and also purchase a variety of foods to feed themselves and their families. As machines were invented to also make harvesting some crops easier with fewer people, many farmers began to grow cotton and other products as their major crops which were needed for making cloth, garments, etc... in the cities and could gain a good cash price. So industry was able to grow as businesses were able to increase production which also developed more work and increased profits for the investors or well off owners. 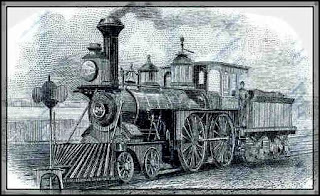 Commerce also began to increase as people started ignoring the guild policies and just began creating and selling goods for themselves to sell. In the past, guilds had helped limit how many goods could be made because there was a limit of how many people could make the goods. This had now changed and as people invented machines and found new ways – with water and coal- to move the machines to create products such as cloth, this also increased the quantity of good available, the variety of goods and brought prices down... which made purchasing goods possible for people who it would not have been financially feasible for before. As more people could buy goods, more goods needed to be made to keep up with the need which in turn would create more jobs, etc... The flood of agricultural products into cities helped entrepreneurs and other leaders of commerce to build larger businesses so that they could increase their supplies and sale-able goods... and brought the prices of food down as well. With all this growth and the need by the cities... and soon countries to move these goods to their place of sale quicker, travel and communication became significant challenges that people worked to overcome. It was during this time that trains were developed and the telegraph was invented- both of which helped move messages and goods quickly and efficiently to other areas. Soon people of moderate means could afford to use these forms of communication as well as the possibility to purchase newspapers or trips on trains that encouraged more openness and trade between the cities and countries they connected.

I see these four processes are spokes on the same wheel. Apart, none of the groups would have grown very quickly and change would have been small. Industry would have had very slow growth if any because there was not a large, legal work force without other jobs nor was there a large population who had money to buy the goods if the quantity of produced goods had increased. Large landowners couldn't have created the wealth that they did by their mono-culture crops if the majority of their lands were still leased by peasants. Commerce couldn't have grown at all without more goods at cheaper prices and people who felt like they could afford to purchase them. It was also able to grow because people could 'pool' their wealth to help develop a business and so individuals who didn't have enough assets and cash to start a business could still invest in a business which could make them more money. And the advances in communication made the growth of the later three quicker and more efficient as well as allowing most people to have more information of what was going on in the world around then.... making the world much larger and smaller indeed. :) 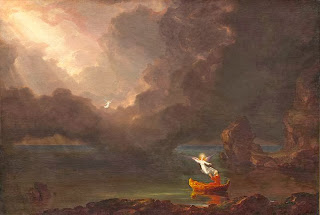 The European standard of living was significantly improved in many way by the Industrial revolution. Over time more people were able to live more comfortably, to own more clothing and goods and to have more options for work than people had in past generations. Heck, the ideas of the Enlightenment suggested that enjoying this life we have now was possible and acceptable and so the focus of living 'to get to eternity' that had been the past comfort to suffering masses was no longer the main belief of most people. The idea that everyone could improve themselves and their lives through education and hard work opened up people (all right... mostly men) to try and invent, learn and strive to rise through the ranks of society... something that had been impossible for most everyone for centuries. You no longer 'had' to go to church or belong to a specific church- don't get me wrong, it still helped make your life easier to be active in the 'right' church. The most significant improvements during this time came from some improvements in medicine, more work opportunities, opportunities to own more and for more people to participate in both commerce and consumption, as well as opportunities to travel and learn more about the world through newspapers, trains, and other forms of communication. For the first time in history news and knowledge could travel faster than people and ordinary people could participate if they could find the means to do so. Fewer people were always on the border of starvation – that was a great improvement indeed! Over time, sanitation was also improved and so disease would not be so rampant in so much of the city. Education was also more available and was available for more people. 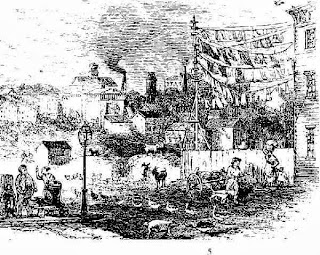 Cities and towns had been fairly small and slow growing before the Industrial revolution. With the huge influx of workers from the rural areas and the growth of new businesses, buildings, etc... towns became cities and large cities grew to phenomenal sizes. Pollution from coal burning gave many cities entirely new 'atmospheres' as the air was heavier, had more fog and was darker as well. Cities also tended to have a great many more families living in them (so more children) than in the past. People in cities tended over time become more segregated into groups by ethnicity, income and community connections (such as family) and as such, city growth was not carefully planned. Buildings sprung up with in a few days and with very little planning... and were sometimes very close together and 'squished'. Lots of people coupled with the inability to be as sanitary as the country (due to proximity vs. amount of land) caused an increase of disease as well as disability and death. Cities were filled with very large businesses (such as factories) instead of the majority of small and so even children would work in the large factories... sometimes for as long as sixteen hours a day. As the population increased, it also help create a feeling of anonymity and fewer feelings of community which also caused other challenges such as upticks in certain amounts of crime, etc... Over time, smaller businesses became more permanent (the traveling salesman wasn't as popular) and smaller businesses developed ways to make shopping more attractive such as indoor light and windows. 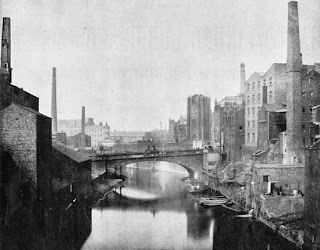 Great Britain was uniquely situated to take full advantage of the growth during this time for a few reasons. One is that as the country had not fought a war of in soil for many decades. So the land and cities had not been as damaged and war-torn as most of Europe. Britain’s government was stable and had been so awhile so other institutions like banking and the law were pretty stable which gave investors and entrepreneurs less nervousness and more incentive to invest and create new businesses without the fear that the government might change and shut down their business... or war might destroy the buildings and worth forth. (As it was also one of the wealthiest countries in Europe, that also allowed for more investment.) As a smaller country covered in rivers and waterways, transporting goods was a lot faster than over land which also gave Great Britain an edge over some of the countries in Europe. With the Enclosure Acts, large landowners were able to force huge numbers of peasants off the lands they had been living on for generations and created a large workforce that needed jobs. As business taxes were generally lower in England and merchants and entrepreneurs were more socially acceptable in society, it is no surprise that Great Britain really surged forward in growth and development during the Industrial revolution.

What are your thoughts? Did you learn anything new? :)
Posted by Badgerdown at 7:44 PM