PTSD : The struggle between Homeostasis and Protection


Have I mentioned how much taking the class on “Genocide and Torture” this semester has really been such a blessing? I have known so little about PTSD and other symptoms and consequences of horrific human behavior and I feel like I have learned so much not only about other people, but also about how my body and my brain reacts to things which I have never understood before- at least not very well. I spent some time this week looking at how two specific systems in our body are used to help the body in times of threat and how it returns to its 'normal' state of being. And while doing these readings, it was really interesting to find out how PTSD actually changes the way that these systems function and causes some of the symptoms that cause sufferers of this disorder so many problems. 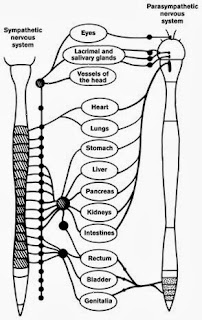 So the first group we looked at was a part of the nervous system called the sympathetic nervous system. It is actually one of the divisions in the autonomic nervous system. From my past medical days, I would remember what it used to do by reminding myself that the autonomic system controls almost all of our involuntary functions such as cardiac muscle, all smooth muscle in the body and also some of the glands. The sympathetic system is easily remembered (to me anyway) because it is the 'action committee' or it could also be seen as the person who feels sorrow for the hurts of a friend and leaps into action to try and help. “Fight or Flight” is the name of its mission statement per se and so when the body (or the mind) needs or believes it has encountered a threat to the body, the 'committee' leaps into action. Our heart rate gets faster (usually our breathing does too), our body shuts down its 'temporarily' unnecessary organs from normal blood flow to improve circulation to the heart, lungs, brain and muscles and the body also starts to release its reserves of stored energy so that the body has extra strength and zip when needed. There are two key neurotransmitters that are released into the body which help create this response; they are epinephrine and nor-epinephrine. The sympathetic nervous system plays a key role in how individuals can recognize a threat, feel fear and how each person will react and remember responses to future stimulus that I considered threatening. 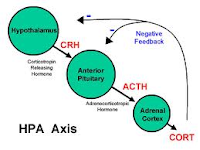 Another response mechanism that the physical body has is called the Hypothalamic- Pituitary- Adrenal Axis. One of the most amazing things about our bodies is that all physical beings have a need to homeostasis- or keeping everything at a normal level. So when the body reacts to something, the body also has ways to attempt to bring the body back to its normal way of being. These hormones try to restore the body to a proper natural state after the person has experienced stress, fear, etc... So when a person has been under the influence of a 'stressor', the hypothalamus releases a hormone that goes to work on the pituitary gland to release another hormone. That hormone works of the adrenal glands to stimulate another hormone that helps to calm the body and 'turn off' the signals of the high 'stress' hormones and neuro transmitters.

In the average individual, these systems work together really well to help a person deal with a significant threat (or perceived threat) in good ways and then brings the body back to a normal level of function. In someone with PTSD, however, these systems do not always work the way that they were intended. So, the sympathetic system can be turned on over sounds or events that are not currently happening, memories etc... and the body will response as if the threat is clear and present. Other studies had shown that some people with PTSD have challenges with incorporating or being sensitive enough to the hormones that turn the stress response off. So people with these challenges are more likely to be overly stressed often and have more challenges in getting the body calmed down and focused again for their regular tasks and needs. That seems like an extra challenge to be sure!

So, take a few minutes and think.... How does your body react to stress and how well does it call down? If you have PTSD, how do you think your body reacts differently than someone else that does not? What techniques do you use to try and help your body reach a level of calm faster? 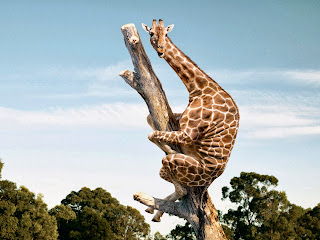 Posted by Badgerdown at 6:08 PM