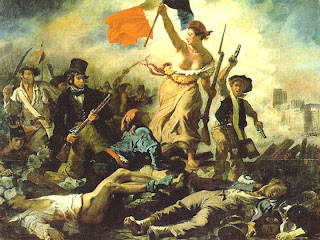 I did quite a bit of reading on the causes or potential factors of building a revolution- I am currently studying the French Revolution that started in 1789. There are many different causes that can be pointed to in hindsight for a revolution and during my studies I have certainly found several potential factors- poverty, lack of prosperity or hope for the majority of French constituents, poor economy and lack of jobs, huge governmental debt, perception (or reality) of the government being weak, unable to lead or create positive change, and ignorance or indifference (or at least perceived ignorance or indifference) by the few who had the most ability to create change.  All of these could be considered primary factors in creating an environment that sparks a revolution- I think that the more of these factors you add, the more you can actually bet on the spark being lit by a 'small' act and the revolution is now fully operating, so to speak. During my studies, I tried to think of factors that would make me as a person be willing to join in an overthrow of my country's government. As I thought I decided that all of the answers that I gave above would (at least in my case) really be secondary factors- all of them are bad, but I do think that to actually join or start a revolution, I would have to have one other defining factor. I think I would need to have pretty much all of the above, but I also would need to feel that the safety of my family and community are not only at risk, but the idea of the status quo being just as dangerous and life threatening as a revolution might be would be the primary factor that would get me to be involved. I think I would have to feel passionately that all of us (friends, family, community) might be dead unless I did something.... and most of the above factors would have to be in effect for most of that to happen I suspect. The thought that frightens me the most about this line of thinking is that I think many countries, including our own are in this sort of 'swimming pool'- the factors above are all in place and the pool is full and glistening in front of us... we are simply waiting for the one thing/person that gets us all going off of the diving board. I really think that most people will not join a revolt or cause one that becomes a revolution unless you have many factors that they feel passionately about, no ability to see that they will be fixed in the future and the very real possibility of the problems getting so much worse. If you have been suffering for awhile, even a small suggestion of more suffering could really be a breaking point.

I think that these factors are the same reasons that will continue to push for revolutions now and in the future on our planet. I think that as long as people feel hope that things can become better, they can feel help and that they have a voice for facilitating change... then we can as a people will continue to suffer with the economy, shrinking public safety nets and community services, and other difficulties and will do so looking for the light at the end of the recession, etc... But suffering for long periods of time, feeling 'dull' and hopeless, and finding no ways to move forward and only despair and suffering can and will eventually cause people to strike out in their frustration, anger and desire for something else. 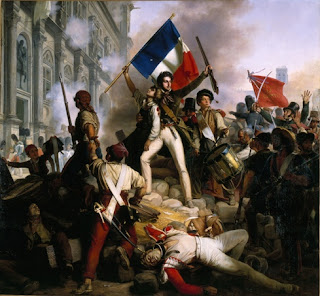 I think that is why revolutions tend to be so bloody- the negative emotions cause people to do things that they might never do in any other circumstances. And that is one reason that I dislike the idea of revolution so much. People kill children and people who do not agree with them to up hold their virtue - whether it is change, human rights, etc.... and their virtue becomes in some senses a demon; harming and killing everyone in its wake until the fire of their passion and virtue is put out, contained or destroyed. Many die who had no part in making the problem, many die who wanted to fix the problem, and many die who may not have even understood what the problem was. I will admit that I don't feel comfortable with revolution – even non violent revolution- simply because of the ferocious pace. I prefer change that comes gradually but sure and brings people happily or confusedly into the group... not by force, or other negative means.

Do you think that America has many of the factors that I described above? What are your thoughts on this issue? What would you need to have to get involved in a revolt/revolution?
Posted by Badgerdown at 7:47 PM