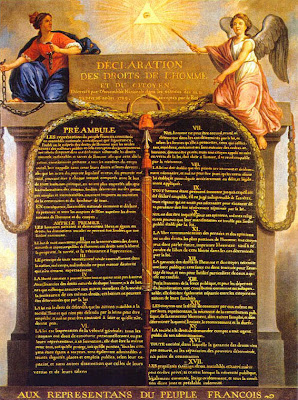 I thought it was interesting to read this document and how different times and cultures would read and interpret it differently. One word that stuck out to me as up for varying interpretations was the word nation. The text of the 'Declaration of the Rights of Man and Citizen' is in some ways vague about who actually makes up the French 'Nation.' The word is only used in the third declaration which is:

The principle of all sovereignty resides essentially in the nation. No body nor individual may exercise any authority which does not proceed directly from the nation.

This statement suggests that when the word (nation) is used, the meaning is 'everyone'- that no person or individual is to be excluded and so any time that the word 'nation' is used the assumption is that it includes all human beings. That said, a thorough reading of the rest of the document seems to suggest that certain rights seem to have been given to men only while others were given to all citizens (which I assume includes women, children, and those of other races- I recognize that is a false assumption based on my current culture.) Taking the time to read and assess other documents from the current environment as the 'Declaration' for answers didn't make the definition much clearer. For example, one document states that nobles “opposed measures that they feared would increase ministerial power and insisted that the French 'nation' be consulted about fundamental changes in its constitution. And they saw themselves as the natural spokesmen for the rest of the nation.” 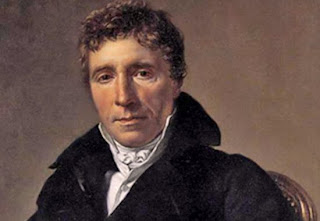 So the word nation in this sentence really seems to be the nobles who believe that they speak for everyone economically lower than them... which is most of the population of France. Emmanuel Sieyes, another contemporary writer at that time, stated that the Third Estate (most of the population) “has... within itself all that is necessary to constitute a complete nation... If the privileged order were abolished the nation would be not something less but something more.” This statement clearly suggests that the average commoner or anyone not a member of the 'privileged order' should be the actual meaning of 'nation'. So it appears that the definition of 'nation' changed depending on who uses the words and what their motives were.

This 'Declaration' has many pieces of it that are quite forward thinking and revolutionary for that time. French society before this time period was very stratified in nature with a small percentage of privileged and the 'inherited' classes on top, a small layer of wealthy and landed families, and a large layer of serfs, peasants, etc... The first declaration in this statement is that all men are 'born and remain free and equal in rights; social distinction can be established only for the common benefit.' This statement recognized and started the process of abolishing the separate layers of this clearly stratified society. The second declaration states that all men have certain natural rights that no government can or should infringe on which are liberty, property, security, and resistance to oppression - in later declarations these terms are described. Free speech is allowed, only actually lawfully forbidden laws can be punished and punishments must be reasonable, the presumption of innocence, the public’s right to be able to have information from the government, etc... However, in many ways this document is not that revolutionary. Women have no actual rights declared (until recently and in some cases in this country we still do) and unless a law specifies women then the law doesn't necessarily include them when the law uses the word 'men'. How this has been interpreted is that if the law is a negative such as stealing, women can be prosecuted under the law and they are. However, laws that are positive and provide benefits (such as owning property) tend to have be interpreted as excluding anyone except for men. So while some men gained more rights in France during this time, no one else did. Property was now considered a sacred right that could not be taken away by the government without due cause, but the property still belonged to those who had been of the privileged class... leaving the vast majority to have freedom, but no property so they were still in some ways tied to the land. The Declaration also seems to have been interpreted to only give white males the rights and so minority men could still be slaves and not covered by the law... in fact they could still be considered property so the law gave them no rights except for the sacred right of 'being owned'. So the privileged order may at that time be considered 'not as privileged', but they still had the land, the money... and now that the government was overthrown, they had that power to. It was in their interests to keep as much as they could and still keep the 'Third Estate' happy. Some rights were given to citizens but the definition of what a citizen was is not in the document and was left for other people to determine- again being able to interpret it in the ways that suited the wealthy and the property owning classes.... and their own biases. 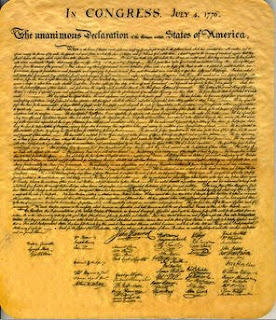 When reading this document and trying to decide what the writers envisioned in a society that was governed under the 'Declaration of the Rights of Man...', I feel like these individuals were hopeful to make good change but also wanted to really calm down the rebellion. By making the new basis of government so vague, everyone could feel satisfied and calm down and get back to their everyday lives. During this time, the laws and government could then be made and as long as there appeared to be some benefits, the majority of people wouldn’t have revolted again. Getting the violence stopped and everything back to 'normal' would have been a key thought in the mind of these writers. I do believe that the writers did want to make the world they lived in more equal and to move away from the absolute monarchy, but I also think that this document is still based on the assumptions and biases of these writers- all of whom were white males of good family and not wrung out in poverty. So I envision them looking for a country without violence, more equality and a more representative government... but a country where white men still ruled and had more benefits than anyone else.

If you take the time to read this document (it is only a few pages), what are your thoughts on it? How do you read it and what does it mean to you? What do you think it meant to its contemporaries and its authors? This document is very like the American 'Bill of Rights' as many of the writers and contemporaries who gave voice to both documents thought were the same... Does this change how you feel about either of these documents?
Posted by Badgerdown at 9:09 AM