Thoughts on the Armenian 'Catastrophe' ... and Why do Americans Have No Knowledge of This?

This week I read most of the book “The Sandcastle Girls” by Chris Bohjalian. I was really impressed with the writing of the author and how he did seem to capture so much of what the experience might have been like in the recollections and visuals of the characters. I was also pretty astonished by how well he writes in the perspective of the gender he is not- I think that takes a great amount of brilliance, observation and listening. It also suggests that we are human beings divided into man and woman are not as different as we believe that we are. 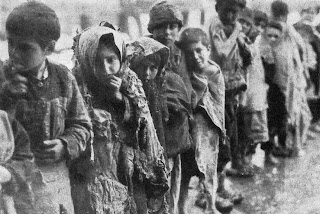 After doing my reading I decided to tackle the first question that was brought up about the genocide in our class- Why do American's know so little about the genocide? I found while I have tackled this question I have gotten a firmer idea of what a genocide actually is and why the Salem witch trials , while pretty horrific and had almost all of the same motivating factors, were at least different in a few ways. I took the time this week to try and do a short informal poll. I have 100 or so Facebook friends and so I asked point blank on my page last Thursday if anyone had heard of the Armenian genocide and what they knew about it. I got seventeen responded and all of them were negative - “What is that?”, “ Is that recently?”, and other generic responses. I also asked very quickly at the beginning of my medical assistant class on Tuesday and all five students plus the teacher denied ever hearing about it. I asked at church and simply seemed to cause confusion including people asking who the Armenians are... When I mentioned that ISIS yesterday had destroyed a memorial dedicated to the Armenian genocide in a class, the only comments seemed to be outrage that a church was hit and confusion as to why it was a memorial. So I spent a few hours in the library trying to research the question as to why we as Americans hear nothing. I looked at the books I used when I studied World War I two semesters ago and there was no reference at all. (Heck, I looked at all the sources that I used internet, etc... for my paper that semester and found pretty much nothing.) So I think that one reason that Americans do not know about it is that the majority of the books and sources that we can use for studying that period of time focus on the 'Western' and 'Eastern' Fronts and the death and military strategy there as well as success, failure and stalemates. It feels that where our troops were and what they were doing as well as our allies are considered much more important for us to know and study. I think that is only a part of the reason though because one source I found suggested that the Armenian genocide is the second most studied genocide – second only to the Holocaust. Yet, everyone polled knew of the Holocaust and not the other. 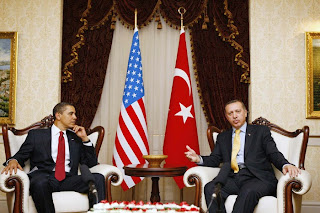 I think a big part of why Americans are not taught about the Armenian genocide is actually political- politics now and in the politics after the end of World War II. I have come to this conclusion for a few reasons. The first reason is after the readings and some research it appears that all genocides have governmental involvement in common and as such, politics must necessarily be involved to a certain degree. For the Armenians, it was the members of the political parties/ groups of the Young Turks and the Committee of Union and Progress that designed and carried out this genocide. It appears that only governments can really create genocides because only organizations that are that big and wield that much planning and power can effectively achieve these aims. While others may dream of doing so in small groups or individually, they can't do so effectively without all the pieces that are necessary and it appears that for the most part, only governments have ties to all the pieces required... a military, central planning, ability to develop machinery and secret organizations and police forces, etc... So political groups may have as part of their platform a policy or a platform that encompasses ideas that make the genocide not only possible, but more likely. The government of Turkey has a lot to lose if they 'admit' and acknowledge the genocide. First, the government itself owes most of its assets to the acquisition of them from the Armenians. That in itself is a large motivation to keep quiet. The longer that the Turkish government denies it, the harder and more difficult it will be for them to eventually back down

One of the challenges of learning about the Armenian genocide was to discover its existence. Over my lifetime, history has been an important aspect of my education and my life. It has marked itself upon my mind and with few exceptions all my college electives have been history based. So how was this piece of recent history missed? Isn't it interesting that candidate Obama would use the word genocide when talking about this act... and President Obama will not?

So… how many of my readers have heard about this genocide? What do you know about it?