The International Committee of the Red Cross and Neutrality


One thing that I looked at this semester was the ICRC (International Committee of the Red Cross)and the idea and guide they follow of neutrality. I found myself thinking about neutrality and truly being impartial and whether it is possible. After researching this for a few days, I have decided that the International Committee of the Red Cross but remain neutral… and can’t actually do so… and are not seen as neutral in areas where it counts… and therefore should either reclaim its neutrality or ‘let it go’. Some people will not agree with the statements that I made previously so I would like to take this opportunity to explain what my thoughts are on this subject. 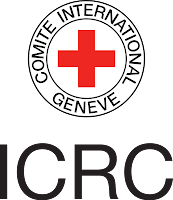 The ICRC was ‘started’ in 1876 as a loose organization work towards helping people in need- whether from natural disasters, wars, etc…Part of the original creed was to be neutral and to give help that was not dependent on political, religious or ideological acts or purposes. To provide humanitarian help while remaining neutral allows the Red Cross to be able to get into places more safely then they could otherwise and they can help anyone and not have to worry about who is guilty or who is innocent or whether the war is just or not. That is a great and wonderful mission. With that kind of reputation and example and being able to see how the Red Cross can get into prisons that no one else can get into and war fields and towns under assault and create ‘safe areas’ and help anyone. I guess the problem I see is that I do not feel like as an organization it can ever be fully neutral nor be seen as such. 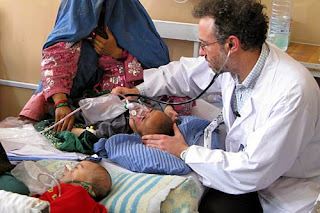 Any organization, even a non- profit has goals and needs money and volunteers/ employees to accomplish them. So this organization depends on donations and as it is a large organization…. It requires a lot! The 2010 budget for the ICRC is thought to be around 1156 million Swiss francs which comes from voluntary donations from individuals or organizations during annual appeals or emergency appeals for specific situations. However, most of that money doesn’t come from individual donors- over three fourths of their budget comes from governments or states including the US and Canada. It’s not that far a stretch to recognize that these large donors can restrict some ways that their funds are used according to their own political, religious or ideological visions. There is evidence that this happens as US aid is not able to be used to perform abortions no matter the circumstances the woman is in or her life and other countries have placed those same restrictions as well. (As recently as 2013, the United Kingdom removed this restriction from their funding. It is estimated that around 16% of their donations are tightly limited in how and where the funds can be used. So understanding that aid has ‘strings’ to it is a recognition that the organization can only be as neutral as its donations allow it to be. Also, recognizing that the aid is being paid for with donations from countries that are actively encouraging foreign intervention in your country or even actively engaged in war… well, how can that really be seen as neutral? We also need to recognize that this organization is run by human beings who will come with their own biases, prejudices and may not always recognize them. Lastly, the ICRC is and has always been run by people in Switzerland. I am not saying that is a problem, but it doesn’t suggest true international participation or understanding if the hierarchy is also chosen and kept in one country. In fact, it suggests a bias because the country itself gains from the reputation of the organization and the money that pours in helping its economy, its citizens etc… Another example is that ICRC has created a corporate ‘arm’ (Corporate Support Group) which was developed and consists of businessmen and companies both in Switzerland and foreign states to promote economic well-being around the world and to give the organization private sector support. They do restrict members to individuals or organizations that are of “good ethical standing and membership {and} will therefore be restricted to a limited circle of companies whose activities are compatible with the ICRC’s principles and mandate.” It is not difficult for people to look at this arm of the organization and see that it has a bias. Yes, the ICRC wants members that are ethical and in ‘good standing’… however, the public sector always has a bias and that view will not always be swallowed up into best practices. Profit, the business's needs and mission, all those will potential influence where their donations they give are spent and how. Hence, even in neutrality, it is difficult to find a way to be impartial. 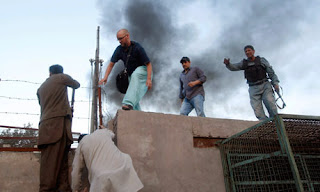 I guess I do not see that the International Committee of the Red Cross is still perceived as ‘neutral’ as it is trying to say it is. There is evidence that other groups do not see them as neutral or impartial that can be seen when we look at physical attacks on their buildings such as the attack on the ICRC headquarters in Bagdad in 2003 and the attack on their headquarters in Panjshir Valley, Afghanistan in 2013. There are complaints by other NGO’s that have most of the same goals and the Red Cross doesn’t actively work well with them. It suggests that all of these groups including the Red Cross are more worried about their group and its wants/ needs than the people they are serving. Some writers suggest that aid groups actually help further war, make it more likely for violence to happen, and keep it going longer than actually countering and stopping it. That seems counter-intuitive at best, and hypocritical and anti-humanitarian at worst.

So I go back to my original thoughts. I think the organization should remain neutral by reclaiming their neutrality or they need to let it go and be like a lot of the NGO’s that they do not believe are neutral. I think that opening up the hierarchy to people from other countries, amputating their corporate arm and making it totally separate and unrelated, being willing and working towards a most positive relationship with other groups and not accepting funds for their ‘neutral’ agency that have restrictions on them. In fact, I bet that funds might be less likely to be restricted by some countries if the information got out that the funds were only offered with strings attached... as people would then know and be more motivated to work on changing that. Those are my thoughts…