I believe that the model of reconciliation that was used in the aftermath of the Rwandan genocide could be used in the aftermath for all genocides. Depending of the circumstances within each individual genocide, I think could be easily used with some potential changes if needed. There are a few reasons that come to mind that I would like to share. I think this may be a stream of consciousness post so I apologize in advance.

My first thought is that the idea... the process of reconciliation... is necessary to heal people and communities- period. The idea of 'to reconcile' is not necessarily simply defined. The simple side of the coin is that reconciliation 'restores friendly relations between' or 'cause to coexist in harmony', but we must also acknowledge the other side of the spectrum; 'to cause (a person) to accept or be resigned to something not desired.’ For any process of reconciliation to be successful, both sides of the situation have to be addressed and when we then look at that full spectrum, it becomes clear not only how important it is to accomplish reconciliation, but how difficult it actually will be in practice. One thing that happens with all genocides is that people leave. Victims flee and usually resettle themselves in an area they consider safe whether it's a few towns away or even continents. Physical distance can bring safety and even rebirth... but it also hinders this important process. An important part of reconciliation is communication and being able to try and open things up and create vulnerability for both the victims and perpetrators. The separation of both groups feels to me like a cauterization of a blood vessel; both sides are seared closed and apart which stops bleeding and open difficulty, but leaves the situation on unstable ground... Some may heal, some may become infected and permanently damaged, some will die, but all will have scarring from it. That scaring, permanent damage, or death can affect the families of the individuals as well as their communities in both small and large ways. I feel like many people cannot actually move forward without the communication and natural expression. Reconciliation helps both the survivors and perpetrators to deal with their fear, their mutual guilt (even if the guilt is different), as well as the anger and other emotions that has been closed inside their minds and body systems. From everything I have watched, read, and from the work that I have begun on my project, it seems like this is a crucial step for healing that many people are unable to get or participate in. If that could change for future genocide participants as well as those who are living today, I think that would be a really good step forward for not only those individuals, their families and their communities, but for all of us as a whole. This is not always possible. In the first world, people move more easily to other areas and perpetrators can more easily hide, especially if they have monetary resources. People who have fled tend to put down roots in new areas and do not tend to move back to their original places, especially when their property has been taken. However, I think that open communication with mediation and with the community remaining pretty intact is the best way to facilitate healing between all parties. 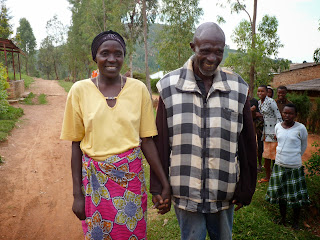 I also think that forgiveness is an important aspect of reconciliation that is not often addressed or is misunderstood. Some people believe that if you forgive your perpetrator, you have given them a 'free pass' or that their inappropriate actions no longer matter… i.e., justice is no longer important. Other individuals believe that if they forgive the person that they no longer remember or acknowledge the hurts and so they are stymied. Others are simply too angry and too hurt to be able to see what blessings they still have left; all they can see is their losses and what others (especially the perpetrators) still have. My understanding of forgiveness doesn't relieve the perpetrator or their guilt or crimes nor does it suggest that you totally forget the wrongs done to you. It doesn't require you to put yourself into unsafe situations with a perpetrator nor to focus on the loss and impermanence of the people and positions that we lose. I believe when we work on the process of forgiving, we do not do anything for anyone except for ourselves. We give ourselves permission to let go of the pain, to remember and recognize the past but not let it rule our current life and feelings. In essence, we release ourselves from the burden of the pain, anger, etc... and allows us to be able to feel the positive emotions of love and joy again in our life. Please understand, I recognize that forgiveness is really hard and the longer you wait and the more you feel you need to hold onto the 'bag' of experience, the harder it will be (if not impossible.) The model of reconciliation includes forgiveness in it and I think that is a very important but overlooked aspect that is important for people to be able to be able to really live and not just 'survive'. One last thought on this idea is that many of us find it challenging to forgive ourselves for our mistakes – far more difficult than we find it to forgive others. I think that a perpetrator needs to learn and work to forgive themselves. Denial, repression, shame, anger at oneself or even people who are too narcissistic rarely helps you or anyone around you and I feel like the perpetrator themselves is 'broken' until they are able to complete that process for themselves. 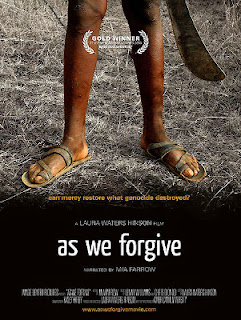 My last thought is that part of reconciliation in my mind is restitution. As many people mentioned in the documentary “As We Forgive” and in so many other resources and testimonies (and from my own personal experiences), service / restitution towards those we have harmed can help with healing and kind feelings for both the survivors and perpetrators. Survivors get a service that is needed and helps them to feel valued and important to the community they live in. Perpetrators get to serve someone they have harmed. Nothing they can do can replace or 'fix' what they have done, but the act of serving someone you have harmed changes the relationship between the two individuals. Over time as service is performed, a more positive relationship and feelings between the individuals are created and are able to grow. It helps people and communities to become more accepting of each other and their history and differences. Restitution brings us to the other side of the spectrum; the idea that something must be accepted that is not desired. For many people, seeing people, being around individuals who have harmed us is difficult. Why do people move away to other areas when they hurt someone? I suspect that it allows them to 'redefine' themselves and to 'start over'. Why do victims move away from the area of abuse or genocide? Some of the same ideas apply. However, I really feel that the model that Rwanda has given us is so valuable because it encompasses all three vital ideas of communication, restitution, and forgiveness that enables both individuals and groups to work together to recover and rebuild themselves, their families and their communities.

What do you think? Do you have a personal experience that you are willing to share?