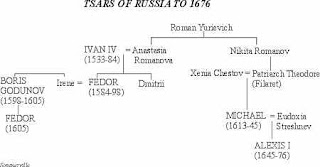 During the years of 1533- 1689, the country known as Russia changed dramatically in many ways. Some changes occurred in a form that could be described as fluid or even 'see-saw' like as borders were increased and then decreased... sometimes in the same areas and sometimes in an amoeba-like form with some sides pulling into the center and others branching out towards other lands due to war, invasion, etc... The country participated in many conflicts on different fronts with different armies and with different intentions. Large populations and cities were decimated/ destroyed and migration to safer areas continued through this time frame. One ruling dynasty ended with the son of Ivan IV, the 'Time of Troubles' began, and ended with the beginning of the Romanov dynasty. The world and other countries themselves were in a time of turmoil and rulers of many lands did not have the easiest time of it- especially Charles I of England in the 1600's. This paper will discuss a little bit of the social and economic lives of Russian constituents during this time frame as well as the expansion of Moscow. It will also discuss the intentional introduction by Tzar Alexei and his successor Peter I of European ideals to the country as well as the 'importance' he placed on introducing foreigners to the Russian way of life. 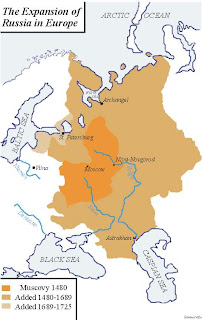 During the reign of Ivan IV, the economy suffered severely and it was only around the year 1600 that the economy was recovering from the damage caused by Ivan's wars, oprichniki, and other 'excesses'. The turmoil/civil war and foreign invasions during the 'Time of Troubles' contributed to the economic and social problems. For instance, Tsar Ivan IV' s successors continued their quest to conquer lands to the south, in spite of clear signs that this decision was causing more economic distress. (One source mentioned that when Tzar Fyodor I died, Russia's economic and social crisis was 'severe'.) When Michael Romanov was elected as czar in 1613, the city of Moscow was in such 'dilapidated' a condition that the czar was housed at the Troitsa monastery for several weeks, so that decent accommodations could be provided for him. Tsar Michael raised taxes to pay some of the nation’s debts and also to improve economic development. He also created eleven new departments of state to carry out specific tasks including a department to rebuild Moscow and a department to restore order. He also attempted to stop the southward migration of the population and completed a census or lands and population so that the new taxes could be collected efficiently. When he died, his successor tried to continue Tzar Mikhail's agenda of autocracy, order, and economic improvement. 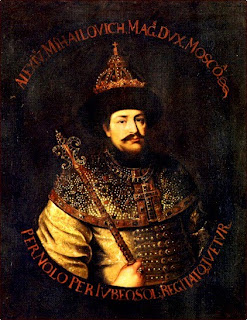 Czar Alexei Mihailovich also began his reign raising taxes on items such as tobacco and salt which were extremely unpopular. Due to the flight/migration of peasants to safer areas as well as looking for 'freedom' from different forms of oppression, Tsar Alexei modified the laws to stop the flow of people to different areas creating de facto serfdom and making it illegal to sell yourself as a slave- effectively bringing most of the population (80%) of Russia under Muscovite domination and taxation. It is important to note that serfdom was predominately in the southern and western part of Russia where the borders needed to be protected and peasants were needed to serve the gentry who provided military service- in the north where attack was not always imminent, serfdom was less common. These laws helped to create a form of a 'caste' system in the state and it became almost impossible to move up or down the social ladder... or in this case, a better description might be a pyramid structure. He also created a few new governmental departments, most notably the 'Secrets' department which was in charge of the czar's falconry establishment, the crown estates, etc... 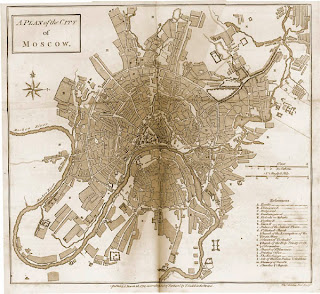 Urban life in Russia during this time did not look like the typical urban areas in other countries. Only the city of Moscow was a large city in comparison to other world cities- by 1689, it had a population of about 150,000-200,000 people. (To put these numbers in perspective, that would have made the city of Moscow about one-half the size of London, Paris, or Naples.) Another way to look at how other towns in the country compared to Moscow is offered by the fact that this 'large' city contained close to one-third of all urban residents in the entire country. Trade was strictly regulated by the state to give the government tight fiscal control- most taxes were levied and collected on towns. Moscow in 1591 had expanded and grown outward from the Kremlin and had become defined by the name the 'Wooden City.' As Moscow 'added' on in size due to the influx of population, different areas were built up and walled in with stone walls- you could just walk from one side of town to another without passing though many walls and different parts of Moscow had different names. Urban areas were areas of commerce as well as just plain city necessities-gathering places, etc... An attraction to urban areas- especially to Moscow- was its location and walls that helped to keep it fortified from outside attack. 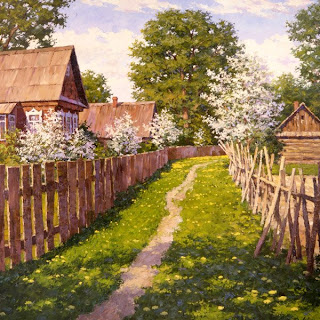 Rural life revolved very much around agriculture. Rye, wheat, oats, barley, and millet were the basic crops grown and one man named Liashcheenko stated- “The agrarian order and rural economy again serve as a key to understanding of all economic and social relationships within the feudal economy and society of the Moscow state during the fifteenth to seventeenth century. The old peasant households which had in the past tended toward an abundance of resources for side income (such as fishing, forestry, etc) tended to now be living very much hand to mouth and always on the edge of bankruptcy and starvation- famines and plagues did nothing to help this already bad situation become better. Social life revolved around work, religion, and subsistence for most. Only some peasants in the north and in Siberia kept their freedom from serfdom as it was so sparsely populated.

Many choices that the Russian czars made that effected the economy also affected the social structure and life of the citizens as well. Taxes and encouragement from the government to buy vodka (due to high taxes) caused drunkenness to be quite common in Russia and was certainly one accusation or criticism of Russia's culture by foreign writers and ambassadors. A German scholar named Adam Olearius who visited Moscow a few times between 1634-1643 stated- “There is no place in the world where drunkenness is more common than in Muscovy. All, of all conditions, ecclesiastics and lay,men and women, old and young, will drink strong water at any time... Nay, the great ones are not free of this vice, as for example, the Muscovite Ambassador, sent to Charles, King of Sweden, in the year 1608, who, forgetting his quality and the affairs his master had entrusted to him with, took so much strong water the night before he was to have audience, that the next day being found dead in his bead, they were forced to carry him to his grave, instead of conducting him to his audience.” Even the impoverished peasant was known to drink when money was available and one source suggests a common quote- “The church is near but the road is icy; the tavern is far, but I will walk very carefully.” Other quotes from foreign sources describe the cold of the Russian climate as unbearable- “You could cast water into the air and it would freeze before touching the ground” and a quote from an English ambassador “[often travelers were] brought into towns sitting dead and stiff in their sleds.” However, it must be noted that not all descriptions of Russia by foreign travelers were negative. One Englishman wrote of his visit of seeing a Russian marketplace- “Your astonished sight is there arrested by a vast open square, containing the bodies of many thousand animals piled in pyramidical heaps on all sides”... it was visits like these that gave European members the revelation that frozen food could be thawed with little loss of flavor. One English painter wrote of the celebration that the Russian constituents had at the turn of the winter season- “They sing, they laugh, they wrestle, tumbling about like great bears amongst the furrows of the surrounding snow” and one British observer stated that the Russian people possessed a “national propensity to mirth.” 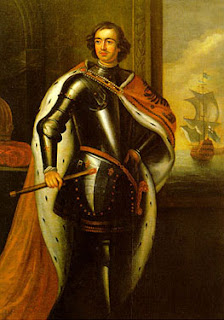 Bringing the knowledge of the 'West' to Russia and also educating foreigners about Russia's way of was of great importance to Tsar Alexei Mihailovich. During his reign, he established an international postal system to improve communications between his nation and the western world. In 1652, Czar Alexei assigner the foreign workers in Moscow a suburb in which they lived and other Russians learned various new or 'western' skills. It must be noted however that the czar had another reason for trying to separate the westerners from other Russian as he wanted to limit contacts between the Russian Orthodox and the 'non-Orthodox.' Tzar Alexei also encouraged entrepreneurs from other countries to come to experimental farms and factories where the foreign craftsman could reach Russian workers skills such as glass blowing and brick-making- he also encourages foreign business such as Dutch ironworks to be built and run in his country. In 1682, Tsar Peter I (the Great) came to power. Peter I encouraged the development of new industry and crafts and modern Russian industry can be traced back to this time. Some of the new developments included metal working, textiles, brick making and china manufacturing. In 1689, Russia became the first European state to sign an equal trade treaty with China. (On an interesting side note, Ukrainians ended up playing an important role in Muscovite culture and government after their 'union' with Russia as the Ukrainian people were the same religion and close ethnically to the Russian people... but were more familiar with the west and became large supporters of the reforms of Peter the Great.)

In conclusion, the economic and social lives of the Russian population were very much intertwined and dependent on each other. As the power of the czar increased, the power of the rest of the population dwindled with most of the population having no legal rights at all. With government encouragement of alcohol consumption to help improve its financial status, much of Russia's social life in many areas revolved around drink- or vodka to be precise. And over time as the economy improved, sills and culture from the 'West' were slowly integrated into Russia as well, taking on their own unique colors in the local cultures. When Peter I continued in power, his reforms and foreign policies would open the door of Russia to Europe and vice versa created more understanding... and more opportunities for trade and economic partnerships.
Posted by Badgerdown at 2:12 PM