There is Special Providence in the Fall of a Squirrel... 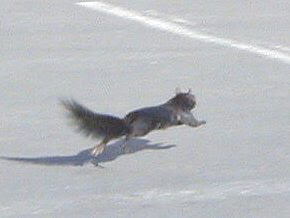 Today, I caused death. Not intentionally and I certainly am not bragging... but unintentional or not, I killed a squirrel. I did the usual try and slow down...swerve a little... all the things that you do while driving at 25 miles an hour and panicking as you see the squirrel leap lightly into the road in front of you and start to run. But, unfortunately for the squirrel and myself, everything I did was not enough and I hit him. And, while I was going fairly slowly, it appeared to be a quick death.

I feel so uncomfortable with the idea that my actions, unintentional or not can cause hurt, pain, or in this case death. I pulled over to the side of the road and my first thought was “Father, please change this.” My next was “why did I leave the house so early? If I had been a few seconds later.....” That kind of thinking is foolhardy and certainly didn't change the situation at all. I recognize that I may do this to people (hurt, not death) on a fairly frequent basis and that thought is overwhelming and uncomfortably sad. And, as I sat by the side of the road, I think the grief that I have been feeling for weeks just flooded into me and I couldn’t do anything, but climb out of my car and carefully cradle the squirrel in my hands and just sit by the side of the road and cry. I cried for the loss of the squirrel but also my losses and my fears and I just cried. I must have looked a wreck and half crazy... just kneeling by the side of the road, crying and praying and holding this poor dead animal. I eventually wrapped the squirrel in a holey t-shirt and buried it under the snow underneath a beautiful tree and headed off to town to 'fulfill' my responsibilities and commitments.... but throughout the day I could feel the grief sitting so close to the surface of my heart and the tears barely behind my eyelids.

I have to find a way through this grief. I am so far behind in school it isn't funny and I just feel like -nothing-. Just nothing. I do not feel like doing anything and I am just going through some of the motions and pasting a smile on my face and trying not to be angry because that won't help. I frankly do not feel like continuing to endure. I know this sounds funny, but in a way I am so glad that I hit the squirrel because I think I was forced to not only grieve but think about my choices and what I want right now. But I do wish that I could have learned the lesson some other way.
Posted by Badgerdown at 7:59 PM