Alcohol, it's Digestion, and 'Potentials' 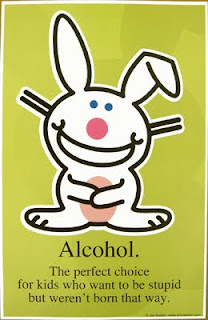 I will admit that alcohol is something I do not really understand or have much experience with. So except for classes, I don't really have any personal experience. Last semester, I found myself quite shocked to see the high statistics on college drinking and I think that studying these subjects really help me to see that I am not actually missing anything. :)

Alcohol is an easily metabolized 'food' which can go straight from the digestive system to the bloodstream. Most of the metabolism of alcohol takes place in the liver-- unlike most consumed foods which are broken down in the digestive track. The liver produces an enzyme called alcohol dehydrogenase which helps the body to absorb and metabolize the alcohol to get it 'out of the system' so to speak. When the liver is trying to metabolize the alcohol, it uses the enzyme mentioned above to turn the alcohol into acetaldehyde... and then eventually into carbon dioxide and water.

While alcohol is able to easily enter the bloodstream, there are many factors that affect the body's ability to break it down quickly and deal with the onslaught of too much alcohol. In an average, healthy person with normal liver function, the body/liver is able to break down 5-7 grams of alcohol per hour – to put that figure into perspective, that is approximately half of one beer. So if you drink faster than your liver can metabolize the drink, then you will become 'drunk' as the alcohol affects your brain function. Gender and race can also affect how the body is able to deal with alcohol- for instance, Asians and Native Americans have much less ability to metabolize alcohol in comparison to Caucasians. Women also have less ability to digest alcohol due to less 'body water' and low activity of the enzyme to digest it... and the woman's stomach is not able to digest as much of it as the average man's. Because of these differences, women are more likely to suffer from alcohol related complaints... such as cirrhosis, ulcers, etc.... Both genders will suffer complications due to frequent over-consumption however, which can include muscle damage, decreased memory and brain damage, reduced immune and nerve function and increased blood pressure... and only temporary relief from anxiety, grief, peace and other emotion/mental health concerns.

There are also two nutrient deficiencies that are common in individuals who overuse alcohol. A general depletion of the 'B' vitamins such as foliate (helps produce and maintain new cells), vitamin B12 (helps maintain healthy nerves and red blood cells), niacin, thiamin, and vitamin B-6. The drinker is also at risk for being short of the fat soluble vitamins as well... such as vitamin A, D, E, and K. As alcohol is able to have a negative effect on virtually every organ system in the body, the potential negatives of alcohol use far outweigh the few potential positives.

So, for individuals who do still wish to have the occasional drink, what exactly is the definition of 'one drink'? That appears to depend on what the contents of the 'drink are... as each type of alcoholic beverage can vary in how much alcohol it contains. A general rule of thumb is is to consume 15 grams of alcohol you must consume:

It is considered moderate usage for a man to drink no more than 2 drinks a day and a women should not consume more than one. It should also be remembered that for some individuals, even a moderate amount is too much- such as pregnant females, children, specific medical conditions, etc... And while there is scientific evidence that there are some health benefits to moderate drinking, it is fully recognized that the potential negative effects of drinking are so much more potent... and so it is recommended that those who do not drink should not start for their health! And for those individuals that do drink, they should do so very moderately... or even a little less! 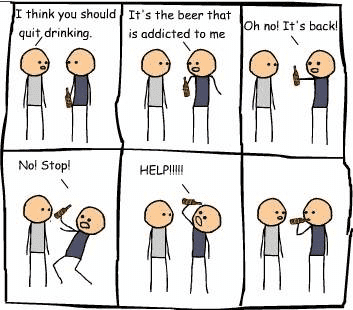 Posted by Badgerdown at 5:49 AM