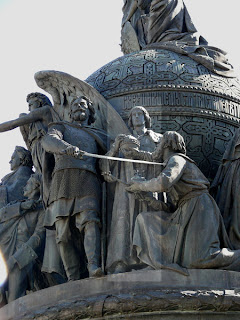 The accession of Mikhail Romanov to the Russian throne in February 1613 marked the end of the 'Time of Troubles' for the Russia country. A few ideas survived this time stronger and intact which was to affect the Russian country politically for centuries to come. The idea that only a strong monarch/tzar could keep the country from chaos was strong and seemed to many to be the only alternative to ongoing chaos. One idea was that the only stability that had been available was the Orthodox church and that was the only guarantee and unifying factor in Russia without a Tsar. There was also the idea that the person who should be in charge needed to be of the 'people' and understand the hardships that they had faced... and were facing. Last was the realization that the Tsar needed the boyar class and could not have authority without them- they would have to work together or get nowhere but trouble, death and chaos for all. The person also needed to be acceptable to the majority if not all Cossack groups as well as the boyar class. Finding someone on the Rurik hereditary line that hadn't been involved in the intrigue and choosing sides in the long civil war was that much harder. So it comes as almost no surprise that the chosen individual was young, had the appropriate heredity, and had very little political involvement over the last fifteen years. A quote from a source that caused me to laugh- “The choice (for czar) fell upon a boy, whose name might have wrung a sigh from the ghost of Boris Godunov: Michael Romanov.” I think the author was right! This paper will discuss the reigns of Tsar Mikhail I and his son Alexei I of Russia. It will discuss their goals and achievements and help us continue on our enlightening path of learning Russian history. 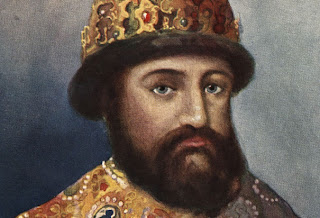 Mikhail Fyodorovich Romanov was born on July 12, 1596 to Feodor Nikitich Romanov and Kseniya Shestova in Moscow, Russia. Very little else is known about his childhood. It is known that both of his parents were forced by Boris Godunov to enter service in the church to keep them out of sight/mind for the 'succession'. Before taking vows and being known as Patriarch Filaret, Feodor Romanov had been a distinguished soldier, a man of diplomacy and had been the popular candidate for the throne when Feodor I passed away and Boris Godunov took over. The young Michael probably grew up in a convent with his mother at Tolvuysiy pogost and then later moved with her to Kostroma. In February 1613, he was the chosen and elected czar.... but the next step was for the new czar to be found. And found he was at his mother's side at the Ipatiev Monastery near Kostroma on March 24th. (On a side note, there is a legend about a man named Ivan Susanin who was tortured to hide the whereabouts of the young Michael Romanov and because of his faithfulness and his silence his ancestors were given one half of Derevischi village by Tsar Mikhail.... or he led a Polish army group sent to capture the czar astray and they were never heard from again. There is some debate about this.) Many sources suggest that Mikhail and his mother were not accepting at first of his new 'elevation'- only after much discussion did Michael accept the position of Czar. He approached Moscow on May 2,1613 and several weeks later he attended his coronation in the Assumption/Dormition Cathedral. He married Maria Vladimirovna Dolgorukova in 1624 and when she died four months after their marriage, Michael married Eudoxia Streshneva. Together, they produced ten children including the next Czar Alexis. 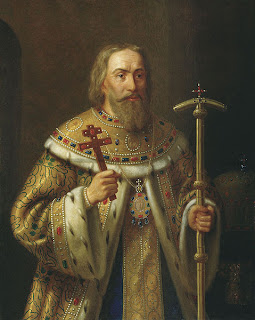 The first priority of the new Tsar in 1614 was to restore order and rid the country of the 'foreign occupators'. One source suggests that Tsar Micheal’s main goal was actually twofold- to rid Russia of the large foreign armies and put to rest the conflicts with Poland and Russians as well as deal with his country's financial problems to help solidify Michael's own position. Due to his age, he ruled closely with close consultation with the Boyar Duma and the Assembly of the Land for the first few years... and well as help by his mother's relatives that took control of governmental affairs until the return of Mikhail's father. Patriarch Filaret returned to Moscow in June of 1619 and took up the reigns of political affairs, accepting the title of Great Sovereign and ruling until his death in 1933. However, before his father's return Mikhail had many accomplishments. He had inherited a bankrupt country and he immediately borrowed money to pay the army and raised taxes. Michael was able to put down an uprising of an pretender (false Dmitri III) and his promoters which helped to cement his rule. After the necessary isolation of Russia during the civil wars of the 'Troubles', Tsar Michael looked to England and to its monarch James I for an alliance that could protect Russia from further problems with Poland- there was precedent for good relations with England as relations between the Queen of England (Elizabeth I) and Russian monarchs Ivan IV and Boris Godunov were mostly amiable. This step, along with the taxes and rebuilding the army ended parts of the Polish occupation of Russia and helped control the Swedish threat. Tsar Mikhail signed the Treaty of Stolbovo in 1617 and the Treaty of Deulino in `1618. The alliance with England was successful in its ambitions and both parties (the Tsar of Russia and the King of England) gained many of the priorities and securities that they wanted in their high stakes game of 'risk'. Throughout the last years of his rule, the czar's concentration was on colonization and fort-building in the south and in Siberia- as well as the reformation of the structure of local governments to increase the authority of the central administration. Tsar Mikhail Romanov ruled until his natural death of illness on July 12, 1645 after naming his 16 year old son Alexei as his designated heir. 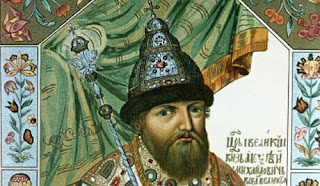 Alexei Mikhailovich Romanov was born on March 19, 1629, to Tsar Mikhail and his second wife, Eudoxia Streshneva. Alexis was brought up by various wet nurses until the age of five and then his education was entrusted to two boyars names Boris Morozov and Basil Streshnev. Even though he was handed the throne at the same age as his father, he had been able to be better prepared for the challenge. He was sixteen years of age when his father died on July 13, 1645 and his coronation was held on September 28, 1645. In Russian, his nickname was 'tishaishii' which means 'most quiet one' and he was known to be a very devout and religious man. (The word 'tishaishii' can also mean 'the most meek.) Tsar Alexei relied heavily on his two tutors for advice during the early parts of his reign, but firmly stood on his own during much of his reign. He married Maria Ilynichna Miloslavskaya in January 1648 and she gave birth to thirteen children in their twenty-one years of marriage... and died a few weeks after the last childbirth. It was said that Tsar Alexei was very grief-stricken at her death, however, he did later marry again; a Nataliya Kyrillovna Naryshkina and after their marriage in February 1671, she bore him three children... including Peter, who would later be known as one of the greatest Russian rulers in history. 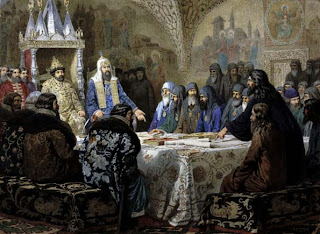 No one can really honestly suggest that the time frame during the rule of Tsar Alexei was not tumultuous. Events happening all over the globe confirm that statement. But Russia itself was part of and participated in some of the difficulties. In Russia during his reign, Tsar Alexis faced numerous town rebellions including defeating the Cossack group led by Stenka Razin, fought and was fairly successful territory-wise in the Russo-Swedish war of 1656, a thirteen year war with Poland which was quite successful territory-wise, as well as a permanent schism in the Orthodox church. According to the introduction to his own book on falconry, Alexis is quoted as saying that "everything must be done with good order, discipline, and exact arrangement.” One source mentions that this quote helps explain the tzar’s emphasis on centralization, obedience, and conformity. He believed that nothing could be secure or strengthened unless great care, strong consistency and hands on strong authority was used. This was not a whim that he expected others to follow alone- Tsar Alexis required the same behavior in almost all instances from himself. Alexei is also quoted as coining the phrase “a time for work, an hour for play” which is still a popular saying in Russia.

He was considered one of the most educated men of his time and he himself wrote and edited many of the important decrees and documents of his time for Russia. He was the first czar to sign laws on his own authority and to permit realistic portraits of himself as well as to actually receive personal communications as a 'person' and not as a leader. Tsar Alexei also established an international postal system to improve communication with other states in Europe. He was described in the memoirs of Lizek as a “Tsar [that] is gifted with unusual talents, has fine qualities and rare virtues... subjects love him so much and revere him.” A monument to Czar Alexei is scheduled to be completed in the city of Penza in 2013 which is the city's 350th anniversary- this city is significant as it was built on Czar Alexei orders to bolster one of the Russian empire's borders. 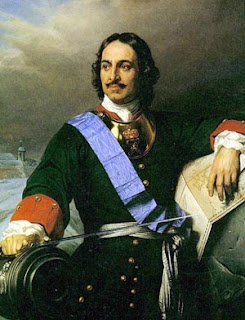 Tsar Alexei was a man who seems to have a broad vision and unlike some of his predecessors, didn't seem to enjoy the punishments that he felt 'forced' to order. His actions increased the territory of Russia and also helped cement the autocracy for his successors... giving them more power than he had come to the throne with. When he died, he left a fairly stable country ready to accept some new western ideas and a lasting legacy. His son Peter I would continue and build on his father's ideals and legacy creating a legend for himself and a country that would continue to last until this very day.... even if in a smaller form.
Posted by Badgerdown at 10:00 AM