Thoughts on Conversation and Healing... 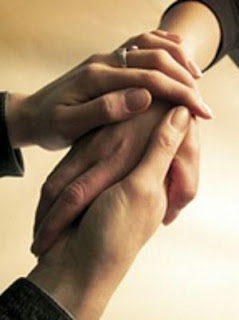 When I was volunteering yesterday, I was given a blank diary from 2008 with beautiful pictures and quotes on different pages. I liked the pictures so I brought it home to glance through and a quote on one page really caught my eye. It is:

I had three thoughts as I was reading and pondering this. The first was that it really is healing to be able to talk about what is on your mind- at least it is for me. When I do not talk about things it almost feels like bad thoughts are able to 'fester' and become an infection in my mind. And healing an 'infection' is a lot harder than trying to deal with the original thoughts. I can understand the need for secrets and for not discussing EVERYTHING on your mind, but I also think that many times, problems are more easily ironed out if the feelings and thoughts are discussed quickly. I think that having someone who cares for you and listens is great and does help in the healing process especially in very painful circumstances. I don't even think that they have to actually agree with you... to just be there and to care means so much.

Another thought was that some people do not feel comfortable listening or even being listened to except in rare circumstances. And other individuals have suggested that discussing a hurt can be not only complaining but harmful depending on the complaint. An example that I thought of was a discussion on Facebook where a friend discussed her hurt and anger at the treatment she had received by church members in her ward in Utah. Another person piped in and suggests that she was in the wrong to even suggest something bad happened at church because that makes the church look 'bad'. It was even suggested by someone that saying anything that can be construed as bad is 'anti- Mormon'... and so therefore this person is as well. In this case, an act of potential healing became another painful act which created more hurt, anger, and separation- even feelings of betrayal. Nobody, even the church defenders, were looked at in a positive light by the outsiders of the conversation that I heard from. And that feels fairly sad, because I have no doubt that everyone, including the original speaker, loves the Mormon church. But the conversation itself became another nail that could be used against the church instead of an opportunity for healing. While I agree that some people in some instances and due to our perception may discuss the same hurts more times than we think they should, I can see how that would happen if the individuals never felt listened to or had their feelings validated at any time in any conversation.

The last thing that I thought of was how polarized I feel our society is right now... and it feels like nobody wants to listen to anybody unless the individuals involved already agree on everything. I feel like the world is full of so much blame and anger and there is nothing that I can do. Yes, I can listen and I can pray and I can hope and show patience.... but I am just one. And it doesn't feel like it makes a difference at all. I go to the foodbank every week and I listen to those who are looking for work and have been for so long and have been unsuccessful for reasons they can do nothing about such as poor teeth, chaotic living arrangements, homelessness, disability, mental illness, no transportation, etc... These people are stuck in catch 22's and I cannot help them either. Heck, I didn't get the last job that I applied for and I am still looking. Last year, I joined a program to help my family become more stable, more financially independent and to get the help we need to move forward. The program is over and considered a success, with promises never fulfilled and our family even less together and stable than when we entered the program. We have no team, no help, less financial stability and our family is broken. We are more alone than we have ever been. And so many others are as well. In a world full of people, that doesn't really make sense to me at all. I want to help, but I am starting to think that my hands are not strong enough to even help/support me... let alone anyone else.

I really believe that being able to talk can really heal pain and sorrow (and anger) and can help people move forward. How can we draw a line so that people can talk without so much fear? The fear of judgment and being misunderstood looms large in many... including myself which is why I have learned to hold my tongue on so much. I am not sure that I am served in that regard as well. I do think that my soul is starting to fester which makes it even harder for me to feel comfortable around anyone. What can you do in your life to try and change this? What suggestions do you have to help other's feel comfortable talking with you? What would make it easier to talk to someone else when you need to spill? How would you support yourself if you needed some help for a while from someone outside your family- whether emotional, financial, etc...?
Posted by Badgerdown at 10:53 AM