Day of the Turtle

Sometimes human behavior can make me so sad and I despair over the future of our race. While I am grateful for free agency, I do sometimes wonder how people make decisions and why that are so clearly from almost anyone's perspective cruel and wrong. What helps when I am feeling that way is to see other human beings with compassion and we can work together to try and fix the things that other people do in their ignorance or even in maliciousness. So today gave me sorrow and comfort as well when I was headed to the craft store today.

It seemed like an ordinary Saturday a first. I started the day getting ready for a visit with my Bug and I worked on cleaning up and organizing and also getting things ready for tomorrow; trash to drop off, laundry to put in the car, books and stuff for Sister Robertson's book swap and loan at the church, etc... Bug and I enjoyed a great morning with reading and eating and talking and goofing off and when he left I put on my casual uniform and started driving up to Bangor. I wanted to head up early so that I could drop off some things at the Salvation Army thrift store and get a little lunch before heading into work. In Bucksport, I changed my plans.... 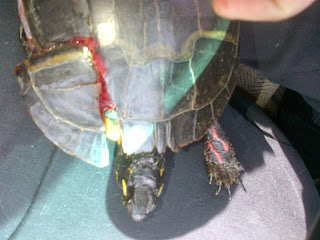 While driving through I saw something in the road that didn't sit right with me. Not really sure how to explain it except it looked like flat road kill that was slowly moving. The movement was slow enough that my first thought was it was the wind on a breeze but a second later I recognized that it was an animal and I slowed down very quickly and pulled over. The car behind me recognized the problem quickly and mimicked me and so did the vehicle behind her. I started to open my door to get out and carefully remove the turtle from the middle of the road to the side when a car pulled out from behind us and sped up. I looked at the young man driving and watched as he spend up, aimed at the turtle and laughing hit it and passed us. The truck behind him saw me and quickly stopped. I held up my hand and when the driver nodded I walked in front of his vehicle, picked up the turtle with both hands and moved to the side of the road. The woman who had pulled over behind me got out of her vehicle and asked how she could help. My hands were started to become slick with the small amounts of blood leaking out of the turtle's sides and he was fighting me pretty strongly. But when I put him down he really struggled to hold himself together with a cracked shell – the hit wasn't perfectly dead on, but it caused enough damage nonetheless. I asked her to try and keep traffic moving and to keep both of us safe and I tried to figure out what to do. It took me only a few seconds to realize that I had nothing in my car that could work as bandages or dressings nor was I sure where the nearest vet that was open on a Saturday was. I yelled over to the woman and asked if she had a first aid kit in her car and she looked back over. In tears, she said she didn't have anything and asked me 'what can we do?' 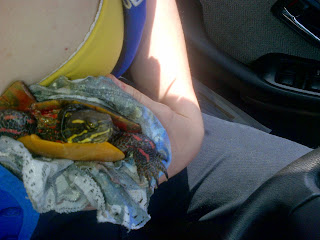 At that moment I recognized the only dressing material that I had on hand, pulled my shirt over my head and wrapped the turtle snugly in it. In a few seconds I realized that my shirt was not a natural fiber and wasn't doing any good... so my garment top came off also and I re-wrapped the turtle- first in the garments and then in the shirt. It worked really well and a few seconds later I realized that the bleeding was under perfect control. It was at that moment that I recognized we had a visitor and looked up in time to see a police officer walk around my car and over to where I crouched- blood on my hands, chest and a little on my pants... and no shirt. I will admit my first thought was that I was in trouble. However, the officer was decent and quickly asked questions which the other bystander answered and as I stood up he asked for pictures and asked where I was headed- was I going to help or leave? I mentioned that the only place I could think that was open vet wise was the emergency clinic in Bangor and I thought I would take the turtle there. He quickly unwrapped the turtle and took pictures- I grabbed a few too and we rewrapped him and I got in my car. One last picture and I was on my way. The officer said he would get as much information as he could from the lady I left behind and said we would chat later. I drove in traffic as quickly as I dared. I called a friend to use the internet to look up symptoms of shock and called the emergency clinic which let me know that I was expected and gave me pretty decent directions. I arrived in Bangor in record time for me, and with only a slight hesitation got out of the vehicle in my state of undress and headed into the clinic. 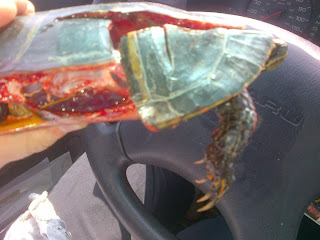 Over the next few hours it was decided that even though it was a glancing blow, he needed to be put down. I had left my contact information and got to work only a little late- I was given a shirt to wear so I didn't have to figure out what I wasn't going to do at that point and simply wore it at work backwards so my vest would cover the words on the front and would fit the dress code. (That was a gift because I'm not sure how I would have purchased on without walking into a store in my lack of dress.) I spoke with the police officer later who thanked me and he told me that hitting turtles was against the law and said that the was working on locating the vehicle with the good description he had gotten from Darlene (the name of the other woman who stopped with me.) I thought it was a little excessive that there was a law on the books until I found out that people like to hit turtles on purpose because if you hit them right they make a great popping sound. (REALLY! AND THAT'S AWESOME HOW!?!?!?!?) Apparently the forest service gives citations for it regularly. I hung up the phone feeling many things and very few of them felt good.

A few days later and I feel more calm. I did the best I could and that's all I could do. A few people asked for a reference for the person who taught me first aid and I gave out my information because its what I teach now. I might even gain a little work from this experience. In the end, the poor guy died... not on accident or for food or anything noble.... but for sport. I have never been able to understand that viewpoint or way of thinking. It was sadistic and cruel and I am grateful that I do not recognize or no the person who did it because it makes it a little easier to turn it over to the Lord. People hit animals on accident all the time and all we can do is try not too and recognize that it will happen and do our best to prevent it. This was a senseless act and if the young man who did this even reads this, I pray that you will not laugh, but think about how that small choice you made effected so many. Not only did something die that didn't need to, but your actions caused sorrow in a few people and angry in several. Did that choice create so much happiness for you that it negates all the bad it did? I somehow doubt it.

So here I my wish for a small, beautiful animal who passed away a few days ago. Feel no more pain and return to the Father that sent you and loves you. Thank for you the opportunity you gave me to help you and to feel your spirit and peace. Thank you for the lessons your trial gave me. I hope that all is well.
Posted by Badgerdown at 4:30 PM