I've been fighting a migraine most of the day. They are always the same. Smells and light feel to strong and to bright... I feel painfully aware of them. The smell of something I would usually find pleasant now hurts and makes me wince and makes my breathing hitch because the more I smell the worse it gets. The pressure builds around my left septum and up through the left side of my head and as it feels like everything is swelling, I feel the vision fade. As the pressure builds up, I watch my vision in my left eye fade and more towards my nasal cavity ... so that looking straight ahead can make seeing anything on the left side impossible with only a little visual help from my right eye. I haven't used Relpax in awhile, but I eagerly sought it out today. In two hours I decided I needed another tablet and my vision was so screwy and the tablet so well protected in its tight sheath that I was unable to open it. I was able to have the second dose only after using scissors to try and break it out and when that failed, the small child I was watching opened it for me. (It is a bizarre testament to the strength of the packaging that nothing I could do opened it, but a six year old child with nails opened it with ease.... and yes, I showered her with gifts afterwards.)

I am so grateful that I was able to stay home today. If I had gone and had to drive back in the storm I am not sure I would have made it home safely. The opportunity to end this day sitting in the dark watching the blizzard outside from the warmth of the couch. The words 'bomb cyclone' sounded really scary... and I think it would have been if I had been out it in... but I feel safe and warm inside my home. I have so much in my thoughts right now, but I have much to be grateful for too. I hope for all to be warm and safe tonight. 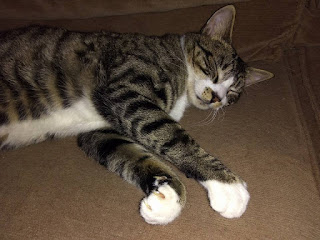 Posted by Badgerdown at 5:29 PM