Here is my painted image that I created attempting to copy the original artist. Please see the original image at the end of the post. 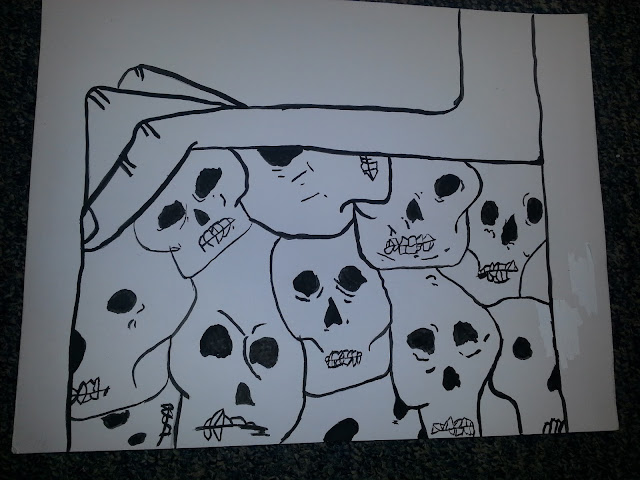 From March 26th to December 16th, 1971, a genocide was committed against the Bengali, Bihari Muslims, and Hindu peoples in East Pakistan. The genocide lasted almost nine months and it is estimated that between 300,000 to upwards of 3,000,000 were killed, became refugees or displaced peoples, or survived genocidal war crimes- these numbers are disputed with some independent researchers suggesting that the number of deaths was closer to 500,000 while the higher number is accepted and put forth by the current Bangladesh government. The perpetrators of the violence came from a few groups of peoples; the Pakistan armed forces, supporting Islamist militias which included Al-Badr and Al-Shams, and members of the Muslim League. This genocide came about during a war for independence and is thought to have started with the planned military intervention called Operation Searchlight, which was carried out by the Pakistani army to try and curb some of the nationalist groups fighting for an independent state. The Indian army joined in the fighting after tensions along its border with India erupted with Pakistan declaring war on India. When the Pakistani army surrendered unconditionally to Indian forces in December the genocide ceased and the remaining Pakistani soldiers became prisoners of war.

This genocide has had some long-lasting effects both on the country and its peoples. The independent state of Bangladesh was created out of parts of Pakistani territory, along with a full constitution that mirrored some aspects of the Indian Constitution. As many of the targeted attacked during the genocide affected students and the intelligentsia of the country, these murders led to vacancies in important positions both in government and higher education. In the aftermath of the genocide, famine, malnutrition and the extremely high number of displaced people/ refugees needed to be addressed. Cold war tensions increased around the world as the Soviet Union became aligned with independent Bangladesh’s ally India. The current Bangladesh government has instituted an International War Crimes Tribunal and laws have been introduced to make genocide denial a hate crime, but there are some critics who suggest that these laws are being used to punish political dissidents rather than the participants in genocide.

This artwork was created by Edel Rodriguez who is a fairly prolific Cuban-American artist. His illustrations and artwork have been found in children’s books, on popular magazine covers, art galleries, etc… This particular piece was published with an op-ed article titled “The Politics of Bangladesh’s Genocide Debate.” I was unable to uncover the name of the piece nor any mention by the artist on his motivation for its creation. What I see in it is a strong hand pressing down on the skulls of the dead… expressing the power that a few had over the lives of the many who then lost their lives according to the desires of that power. I also see the hand as it pushes down on the bones of its victims as an act attempting to silence them and hide the evidence of death and genocide. While this piece of art is relatively simple in its black and white coloring and lined images, it evokes the emotions and horror that acts of genocide bring to the surface. 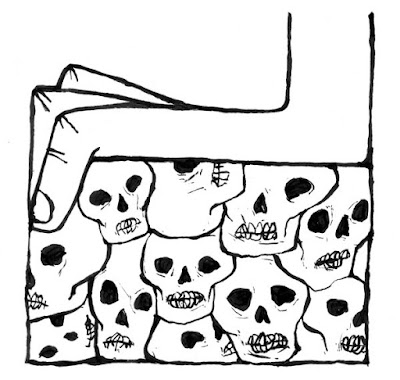 Posted by Badgerdown at 7:04 PM