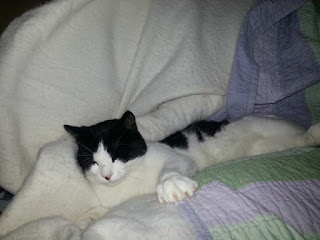 I rarely sleep on the couch for many reasons. It is fairly uncomfortable, I tend to feel cold, and as the couch is a major cat stampeding ground I can find myself waking up feeling like a soft mountain being pummeled by the rush of feet and purring... the sound of the pounding of the feet echoing in my ears for minutes afterwards mainly because the stamping tends to continue. The full extent of the stampede tends to start in the kitchen then up the counter onto the stove, then the kitchen table, then the island... then down to the floor and onto the couch, then down the couch and onto the television and a leap to the top of the treadmill with a last drop to the plant table... and then back to the kitchen to start the circuit again. As you can imagine, that kind of behavior is not conducive to sleep. Actually, it is not conducive to doing homework either when you are trying to type as Salem leaps up onto the table leading the others running right over my keyboard. Sometimes their toes rip off keys and my colorful language after some of these episodes is loud and contains lots of sighs and stomping.

But last night I had friends over and, as I had loaned them my bed, the couch had my name on it. And as I settled in, Mina jumped up and squashed herself in between me and the back of the couch. She is a funny cat. She is very hesitant and reticent during the day- many of my good friends who come over often have rarely caught even a glimpse of her. But as soon as the sun is low enough in the sky that dusk has settled she allows herself to wander within eyesight and fairly close to me. And when it is dark and only vampires are up and moving, Mina is at her ease and ready to cuddle, play and purr. She doesn't like to hang out on the bed much though as there are already a few cats stretched out on it every evening. So it felt wonderful to have her come up and squeeze herself in such a small space and quite touching that she would reach out a paw if I started to move or adjust myself to communicate that keeping me close was her fondest wish. That was wonderful and it was with a light heart that I was able to try and fall asleep again after every stampede... for she would reach over and push me down reminding me that my job was to sleep and hold her. A small gift last night. :) 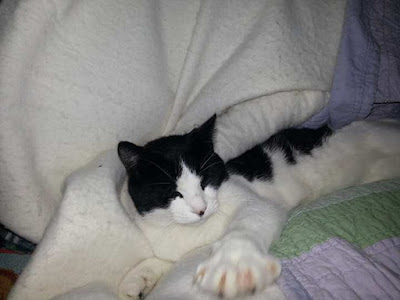 Posted by Badgerdown at 8:14 AM