Light and Dark in Art


As part of my art class, I needed to define a few terms and create an image of the different positions of light and dark with the shading that occurs based on where the light is positioned. Here are some brief definitions or explainations along with the light and shade project.

The difference between the terms tint and shade is how they are used to change color. To change a color’s tint, an artist adds some white to the basic hue. To change a color’s shade, an artist adds black to the basic hue. The tint and shade change depending on how much white or black is added creating a huge variance in colors and their appearance.

The term chiaroscuro is used to describe the effects of light and dark when used to create images. It refers to how the artist balances both light and dark in their creation and how they use this idea to skillfully create the views and ideas that they want the audience to see and comprehend in their work. Using chiaroscuro helps an artist create mood, emotions… even reality and dimension. It can provoke desire and need or even grief, revulsion, or fear. It can be used to emphasize certain aspects in the artwork and hide other areas. Used by a skillful artist, it can create a breathtaking, compelling work of art that draws the audience into the emotions and reality it creates.

Modeling is the term used to describe the use of chiaroscuro to represent light falling against a curved surface. It is a term that describes the different ways light moves across a round object and how the light hits the object and changes the shadows and the way light makes the object look. The basic ways of modeling includes highlighting, the shadow and core shadow, reflected light and the cast shadow.

Tenebrism is a technique of lighting that makes use of large areas of dark and murky picture contrasted with smaller highly illuminated areas in the work. It is different from chiaroscuro in that the light in tenebrism is used to emphasize objects and create emotion in the work while the use of light in chiaroscuro is used to make the object emphasized more lifelike and natural. Each technique creates the reality and emotion of the art in different ways and help the audience create a different perspective to the work. 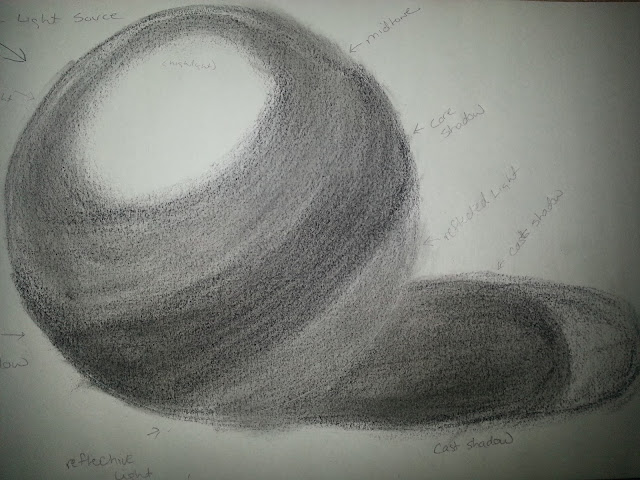 Posted by Badgerdown at 6:55 PM