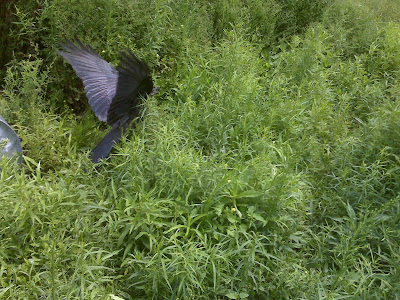 So many things in life are unexpected. As much as we plan ahead for what we want in our lives, we can never truly plan for everything unexpected that can happen. This last month brought a blessing and an irritant that I think had really important life lessons for me attached. It brought Edgar.

I am not really sure when Edgar truly 'arrived'. And I think it was a while before we as a family realized that it was the same bird that was hanging out in the yard... and that it was truly hanging out and not just a casual visitor. He was beautiful and sleek and just handsome bird- raven I think. Cocky and self assured, he would visit the chicken's bowl, drink from the duck 'pond' and hang out with the donkey. Two weeks later, Bug managed to trick him and was actually able to pick him up. Edgar promptly bit Bug's ear with his two inch long bill. To give Bug credit, he didn't let go of the bird- he just yelled until I made the raven let go. Watching the raven for a few days, I really felt that there was nothing really 'wrong' with him, but his acceptance of human proximity as well as two other problems did finally convince me that he does have a problem. So the last 'problem'- when he ended up in a fight with a few chickens and was clearly losing and not really able to fight- to me was the last straw. I entered the fight and scooped him up and with my family's help locked him up with food in our goose house. I then stripped off all my clothing and took the coldest shower that I have had in a long time in my front yard as he was covered with mites and so I, in turn, was also.

That evening I started research – the fact that he was covered in vermin absolutely terrified me. I have come to see that as a sign of a pretty, pretty sick being. All I could find was information on rabies and West Nile Virus- both of which he clearly didn't fit the signs or symptoms of. I had called a few days before to a bird sanctuary called 'Birds Acre' and had not received a call back so today I was a little more insistent and spoke with one of their volunteers (Ralph). He was awesome and seemed very knowledgeable. After speaking with him, he thought that it might be better for me to call a place called 'Avian Haven' so I did. The experience was so different. I spoke with the manager Diane who neatly ignored my questions and very quickly made arrangements to have Edgar leave and go to their facility. What I found interesting was that I truly sensed that she really wanted what she felt was right for the bird, but her communication and immediate dismissal of my concerns really left me feeling very uncomfortable sending him there. I spent more time talking with Ralph at Birds Acre and we agreed to work together with a veterinarian and their staff to help Edgar. When I told Diane about my decision to place Edgar at Birds Acre, her response was pretty bad. Our whole conversation was filled with guilt ridden controlling sentences- “You've chosen to send him where? Why ever would you make such a bad decision?”, or “Well, if you are OK with him slowly starving to death you can do that”. By the time I got off the phone with her I was pretty firmly convinced that I had made the right choice. Avian Haven sounds like a phenomenal place, but if the individuals that work there can't develop people skills, I think very few people who are genuinely concerned about a bird will send for them. I know that I can't imagine trying to work with them again and certainly can't in good conscience recommend them. (I later found out that many people have had the same exact complaint about Avian Haven which I find really, really sad.... how do they get donations to help the birds if they put so many people off?)

So “Edgar Allen Crow”- as my husband has named him from a past literary reference -(will be changed to Lenore is Edgar is a girl) has a big day ahead of him tomorrow between a vet visit and a trip to Birds Acre. The blessings we have received are several fold. We have had the amazing opportunity to look at a raven and study it closely over the last few weeks. We were able to use him for homeschooling lessons for Brock and ourselves (what does he eat, does he need this?, etc...) I have felt some gratification that I am pleasing Heavenly Father because I am taking the time to care for his creature who needs help. And I have never really been in the position of having to make a decision that means (quite literally life or death) to another person or animal. Yes, I am a parent and make very important decisions everyday that will affect my son's living. But the responsibility to research and make the right choice for this beautiful animal that needed my help was something I haven't had often. I have rarely had to have an animal put down – they have died in their sleep or something else has happened. The choice as to whether they lived or died in most instances was taken out of my hands. The weight of this responsibility gave me the courage to advocate on Edgar's behalf to a very intimidating person- that is, sticking to my decision in the face of ridicule, guilt induction, and threats is not my strong suit or something that I am good at. I managed to do it though which is a big deal for me. I also managed to not get angry- which is really amazing for me right now.

So I am going to sleep tonight feeling the satisfaction that I have done the right thing for my new friend Edgar. I am hoping that between the vet and the bird rehabilitation place, he will be able to be released into the wild again soon- his family' tends to hang out daily in the trees... they haven't abandoned him even though he is hurt or sick. (Keep your fingers crossed that the vet will not cost too, too much.) We are helping him in the least invasive way we could find in the hopes that he could keep his life, his dignity, and his home and family. I think we have done the impossible in the sense that while the title of this post is unsolvable and has been since Lewis Carroll wrote it, I have taken the improbable task of helping Edgar and I have managed to get it started myself. I did it thoughtfully and did not allow myself to be bullied or pushed into a decision that felt wrong. Stay tuned- I am hoping that he will be able to fly away in the next few weeks.... so lets see what happens...
Posted by Badgerdown at 8:16 PM