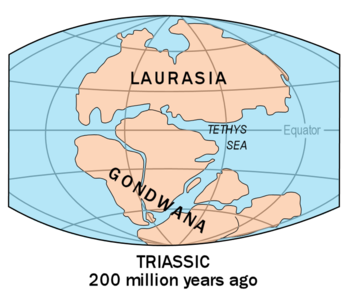 I went and got my quarterly blood draw last week.  I actually have a good time getting that done most of the time because I tend to go alone and so it is like a little break from all my pressing responsibilities.  I can talk, eat a piece of candy, and even read a book if I wish.  You always have to check in first with Lois who is always so awesome and has the coolest office.  While she was helping me get all checked in this last week, I noticed a new large poster in her office.  It had the word 'Gondwana' in huge letters on the top and then lots of pictures of dinosaurs.  I hadn't any idea what the word meant... I knew it wasn't the name of a dinosaur that I had ever heard of (and Bug is getting pretty expert at those particular animals) and I thought that the name for the large land mass before the continents divided was Pangaea. So I decided to find out.

It turns out that Gondwana is the name of a large land mass... Just not the whole huge one piece land mass that is named Pangaea.  The mass that is now called Gondwana (and originally called Gondwanaland) was formed when the super-continent Pangaea fractured into two large and roughly equal pieces.  Gondwana is the southern piece that had the lands that are named Arabia, the india subcontinent, Antarctica, Australia, South America, Madagascar and New Zealand.  Most of these land masses have stayed in the southern hemisphere over the centuries, but Arabia and the Indian subcontinent have moved to the northern hemisphere. This is a very simplified version of a tale that took millions of years.    This continent began to form after Pangaea fractured during the Jurrasic era and it also began to fracture itself later in the same era.

Gondwana in its time was the continent to be on. It was teeming with prehistoric life and throughout its history, the animals and plants that inhabited it that were often very different from the animals and plants on the other land masses. There were a diversity of fish- forms of lungfish, ray-finned fishes and plants, but the diversity of dinosaurs is pretty astonishing. This land mass had some of the pretty well known dinosaurs (Stegosaurus, Triceratops, and Tyrannosaurus), but it also was home to many unique species that developed during and after the fracturing of Gondwana. Among those species that could only be found on this super-continent are Abelisaurus, Megaraptor, Giganotosaurus. Titanosaurs, Argentinosaurus, Mapusaurus, Muttaburrasaurus and Cryolophosaurus. And they are joined by the only dinosaur that has had remains found on the continent Antarctica which is Cryolophosaurus. (see pic) 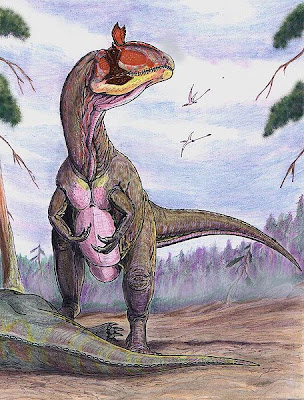 While I was looking through pages of pages of documentation, I realized that most of the dinosaurs that I have heard of and are in the books most commonly found at the local library are 'Northern' Dinosaurs. While the dinosaurs and fauna from the northern land mass called Laurasia are very well known even to people who are not really interested in dinosaurs, most of the 'southern' species are unknown to a great portion of the world. However, this is changing. Places like Australia are becoming proud of their unique heritage and attempting to buy a toy T-Rex there can be quite a trial these days.

So I set out to find out about the inhabitants and the plants of Gondwana- it sounded like great fun and it was! What is so cool is that there is so much information about the world out there- more than any human could ever know- and it is all so fascinating and evidence in my mind of a divine plan and a brilliant, creative Father. What an amazing miracle life is- just brilliant, beautiful, peculiar and amazing!
Posted by Badgerdown at 1:43 PM