The other day I was listening to a radio show while driving to an appointment that discusses current topics and situations over the globe. I was listening while they talked about the situation in Darfur. Over the last few years I wished I could do something about it, anything.... just as long as it would help someone. But I have allowed my life and my problems to keep me distracted. I have allowed my life to pull me along and whisper softly in my ear - “ You are too busy..., You need help...,You have so much to do...., You cannot survive if you try to do more..., etc...” So I pray for these people... and I do nothing. While some would say that a prayer is better than nothing, a prayer rarely feed the starving and saves the malnourished. It rarely stands as a shield in front of the gun and the knife of a person fills with hatred, ignorance, and free agency. I had kidded myself or at least convinced myself that I was doing all that I could. But then I listened to this radio program.

I listened to these beautiful women talk about a world of people like me. People who allow bad things to happen and do nothing. People who even in small ways could have done something and still do nothing. I will admit that the more I listened the more I felt the hot prickles of shame. I pulled over to the side of the road and just sat there and cried. My own problems, the problems that I feel are so overwhelming, painful and so difficult that I can't get past them seemed so small... so insignificant... and yes, even the big ones seemed almost petty. 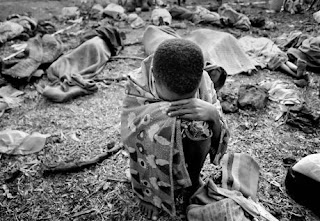 Then one of the women mentioned the Rwandan massacre. She mentioned that she didn't know it was going on at the time it happened because she was young and 'busy'. So she did nothing because she knew nothing- not one inkling that it was going on. She then mentioned that she hadn't been busy with anything really important in 1994. And for a brief moment I could not breath. I had always thought that this massacre happened when I was a baby or a young girl. As a historian (OK, I only pretend to be a historian), I have focused so much on prehistory, the beginnings of history and then the beginning of medieval times. I have focused on certain countries and certain people and the things that have caught my fancy. My history knowledge mostly ends at WWII. Yes, I can name US presidents and some of what each of them have done. I can mention some stuff like the Cold War and the Berlin Wall and can converse on a semi- intelligent and informed basis on them. That's about it though. But I was an adult in 1994. I was graduating from high school and finding a place to live. I was ditching school, getting good grades, performing in theater both in and out of school, and desperately trying to hold myself together. I was working three jobs, trying to control the anger and sorrow I felt towards my parents and my upbringing. I had met my future husband and was embarking on a career path that would change my life. And at the same time, approx 800,000 people were dying- hacked to death. And I knew nothing and I did nothing. For over one million people, that was a year that cannot be forgotten. They lost their family, their health, their security and their lives. It is estimated that twenty percent of the population died. What would it have been like to be part of the other eighty percent? I can't fathom. I sit here and write this and try... and I just can't. Not knowing seems like such a lousy excuse for failing to do something...even something small. But I cannot blame myself alone. Almost no one did anything to stop this. I am an American. I have been told by my media and by my church so many times that I live in God's favored land... that I am so blessed to live in the best country in the world. That we are a superpower and the “world's policemen” and yet... we did nothing. Nothing at all. 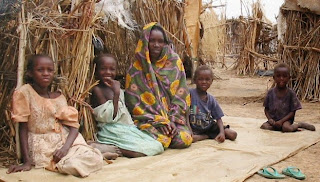 For the last several years, I have believed in a quote I heard in some of my early medical education classes – 'With knowledge comes responsibility'. Well, I can do nothing about what happened in Rwanda. But I am alive now. I have hands that are strong and willing to work... and Darfur is still happening. So far, almost 3 million people have died. People are dying daily from sickness, malnutrition, trauma. And it appears in some ways that they are the lucky ones. They no longer have to worry about seeing their children kills in front of their eyes. They no longer have to fear rape and pain. They no longer have to fear death. Those who are still alive and pray probably ask for many things... I wonder if they pray for the opportunity to live for another day. This conflict began in 2003 and is still going on.... Almost half a million people are displaced and driven from their homes with no where to go.

I drove to my appointment, completed it, and returned to my car. I made a promise to myself and Heavenly Father that I would do something. I have a family, a son who needs me and no money. My health is also shaky. Coming up with something I could do that would be meaningful- even if it was only meaningful to the Father and me in the sense that my contribution would be too small to make a difference on its own. It would be meaningful because I made it... because I did something... and because if enough of us did something, it would make a difference. So what could I do?

I started hunting in my spare moments. My blackberry never seemed to leave my hand. It followed me to the bathroom, to the dinner table... frankly I was hard pressed to put it down while driving. But here is what I found.

1. China is a business partner with Sudan. Because of this relationship, the UN Security Council is unable to pass any resolution that actually causes Sudan hardship- China will not allow it.

2. The leaders of the countries in this world have a lousy notion of sovereignty (usually defined as the idea that a country can do whatever it wants within its own borders. That notion can clearly be allowed to go too far.

So, I decided to try and not buy anything made in China. I doubt anyone will notice. I have noticed because it has already caused me some problems. I was just getting ready to purchased some plastic storage bins and a filing cabinet. I can't- I cannot seem to find any anywhere in this country that have not been made in China. Reading packaging on things that are not food is a new tasks for me. But I am determined to figure it out. Do I think that I will be perfect at this? No. I am sure that I will make compromises for something that I truly feel we need and can't find anywhere else. But I am determined. It doesn't feel like enough, but I think it is a start...

If you have read this post, you now have the knowledge. With knowledge comes responsibility. We as a human race but also Heavenly Father's beloved children have a responsibility, nae, an obligation to do something! What will you do?
Posted by Badgerdown at 8:25 PM