What a Difference Photo-Shop Can Make....


So, I ran across a really freaky picture the other day online. It is a picture of two teenage scuba divers waving to someone while swimming in the depths of the ocean and right behind them is a huge shark- in comparison to them it is simply monstrous. First I felt a ripple of fear and then annoyance- first because I realized that I recognized the picture which is a beautiful picture: 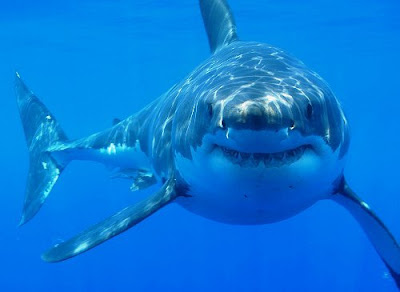 Second, because while I could see the humor, it is definitely set to (at least subconsciously) help others continue to fear sharks in an irrational manner. Your first thought is that immediately after this picture was taken the shark sneaked up quietly and viciously attacked the teens, killed them, maybe ate them and then casually swam away. (maybe even smiling and using a toothpick to clean his teeth while leaving) The only other explanation I could think of was that the 'artist' was trying to make fun of the boys in the picture, or he was …. any ideas out there?

So I took a few minutes to look up the original photo above and to see what different people had done to 'change' it. Here are four examples I saw of the same picture with some humorous wording or drawing on it.

Even the 'light humor' ones sort of felt uncomfortable because even they seem to suggest that sharks in general or the great white shark specifically 'think' like us. So that when they kill us it is because they thought about it and decided to kill us- not that they became confused or even that we put ourselves at higher risk than we needed to. I realize that some people really believe this to be true- one website that was discussing saving sharks had a comment on a post that said “Why should we save sharks – isn't it like saving a convicted murderer so they can go out and do it again?” (I swear that is the verbatim quote) The illustrations added to the picture seemed to me to be a person either trying to make fun of his fear or trying to make the object of his fear look ridiculous and not worthy of respect. (I will admit that was my reaction and might not be the most consistent or correct reaction.)

But these next ones are just bad. They seem to have been developed as a form of humor- but not a benign sort of humor. The first picture is the one that sent me on this rant/discovery. 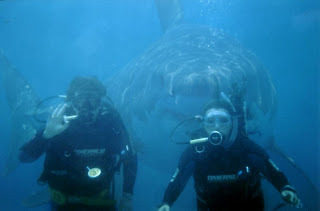 This humor whether intentionally or not puts all sharks at risk from us as they heighten our fear and help confirm our ignorance of them. Fear comes out of ignorance as well as biology. The more ignorant we are, the more we will fear and the more likely we are to try and dispel our fears -not through knowledge- but with violence and bloodshed. 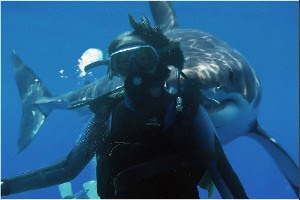 And in some ways it is a lie. A beautiful picture of a swimming shark becomes something more. And the something rarely tends to be focused on the positive side. 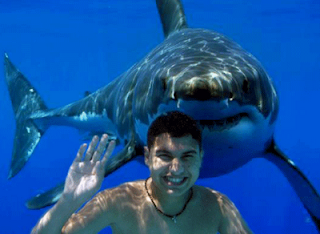 Besides the first picture, I only found one that could be construed as still beautiful after modification were added- makes me want to see the movie :) 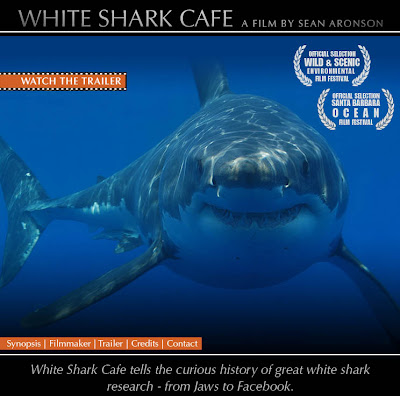 So maybe I do not understand all the good uses of photo-shop. I haven't seen very many pictures from photo-shop that have taught me anything although I have gotten a decent laugh from a few... It sometimes seems like photo-shop was developed so that individuals can unleash their prejudges, fear and anger on others. I know that photo-shop is only a tool- and tools do different things in the hands of different people. And I would love to see more good examples of photo-shoped pictures. It just seems when it comes to things we fear or find repulsive such as sharks, photo-shop is only used to perpetuate negative stereotypes and poor humor.

The original photograph is beautiful in my mind. It shows an animal that is its own being- it is not an animal that we control. It is an animal that follows the laws that Heavenly Father and evolution have set for it. It commands respect and is not tame- nor should it be. So many people love the 'tame cute' animals and fear those those don't fit that mold – by the way, for full disclosure I LOVE the 'tame cute' animals so much so that I am constantly having to remind myself that there is only so many I can own and still have room for my family... (unfortunately, I am only half kidding :) There seems to be a human trait to either 'tame' our fears or destroy them. C.S. Lewis even mentioned in his books that we Christians try to see Jesus Christ and the Father as 'tame' beings.... Any one have any ideas on how we as a race can change that? If we could answer that question, maybe we could find world peace....

So just to be a little hypocritical, I will end my post with a piece of photo-shop. But it is the first piece that on reflection... I think I have understood and feel like it said something sort of useful. :-D 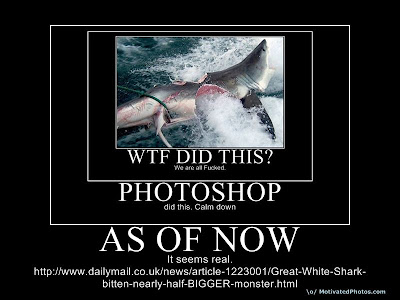 Posted by Badgerdown at 6:40 PM