These notes are from the second episode from the series by Simon Schama titled "A History of Britain." Moving on from the Iron Ages to the Battle of Hastings...


It was the hand of God that decided the outcome of battles... the fate of nations... and life or death of Kings... everyone knew that. 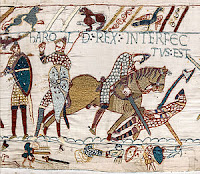 But there are times and places that history - British history - comes at you with a rush... violent, decisive, bloody... a shot load of trouble... knocking you down, wiping out everything that gives you your bearings in the world - law,custom, loyalty, and language... this is one of those places.

But the everyday can rub shoulders with the truly catastrophic. You lived in England but it was no longer your country.

Alfred's grandson was named Edward and became known as Edward the Confessor. He had to govern a country he knew very little about as he had grown up in exile across the English channel in a very different world in Normandy. (France) 36 years old when crowned on Easter day 1043.

Edward named William the bastard as his heir to keep England away from his enemies the Godwin's. The Godwins promoted Harold Godwinson instead. The relationship between Harold and William the Conqueror was complicated and when the throne became available the relationship broke creating violence and war.

The war between the Godwin brothers eventually brought Harold Godwinson down and brought an ending to Anglo-Saxon England with the rise of William the Conqueror from Normandy.

On January 6th 1066 Westminster saw the funeral of one king in the morning and the coronation of another in the afternoon. Edward the Confessor has died and Harold Godwinson seized the throne. William was incensed.

By August 10th William had his army in place along the Normandy Coast. Two great fighting forces bent on each other's annihilation face each other across a little strip of water to determine the destiny of England. There they sat... William waiting for a southernly wind that never came and Harold waiting for William who never came. On September 8th Harold de-mobilized his army and sent his soldiers home.

But he had no time to grieve or exalt over the death of Tostig. For after the battle of Stamford bridge, the Norman fleet at last felt the wind change direction. With it came William the Conqueror and his army. 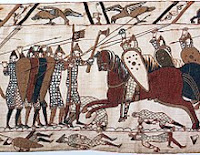 Imagine yourself then on the morning of Saturday the 14th of October 1066. You're a Saxon warrior and you've survived Stamford bridge. You know your position here couldn't be better. You stand on the brow of the hill and look down hundreds of yards away at the opposition. All you had to do was defend the Normans breaking through to the London road. They have the horses. Then they have to ride them uphill. You look along the hillside and you see a densely-packed crowd of Englishmen ready for battle. Down at the foot of the hill you can hear the whinnying of Norman horses and what sounds like the chanting of psalms.

Battle took at least 6 hours to decide. The Bayeux tapestry is shockingly explicit in exposing the extent of the carnage and mutilation. but it was the English army that was slowly, very slowly ground down. Harold Godwinson was dead and the battle soon ended.

What we do know is it half the nobility of England perished on the battlefield.

William had sworn that should God give him the victory he would build a great abby of thanksgiving at the exact spot where Harold had planted his flag. And here it is... a statement if ever there was one of pious jubilation.

William continued battle throughout England until all its major cities fell. William was crowned at Westminster on Christmas Day 1066. But the events was more like a shambles than a triumph. At the shout of acclamation, the Norman soldiers stationed outside thought a riot had started to which their response was to burn down every house in sight. As fighting broke out, many of those inside the abbey smelling smoke rushed outside... and the ceremony was completed in a half empty interior with William for the first time in his life seen to be shaking like a leaf.

His conquest turned the country around. Its focus away from Scandinavia and towards continental Europe. Northern England did not want to assimilate and Williams response was to stage a campaign of oppression towards the north that was not only punitive but an exercise in mass murder. Thousands upon thousands of men and boys gruesomely murdered -their bodies left to rot and fester in the highways. Every town and village burned without pity, fields and livestock destroyed so completely that any survivors we're doomed to die in a great famine. Fast on the heels of famine came plague.

Ordericus Vitalis the monk. Belonged to the conquering class and came over to England with William the Conqueror. He began to pen his account of the conquest and he never minces his words about what he thought of as a colonization. His account conveys the traumatic magnitude of what happened in England in the years following 1066. Pre-conquest England was an old country as Ordericus describes it. Afterwards it was a completely new one.

There was another telling difference between the old and the new rulers of England. Anglo-Saxons didn't use surnames. They were the Cedric or Edgar of somewhere. The Normans incorporated places into their own names as an act of possession. In fact, preserving their estate intact is what the Norman nobility was all about. It was they who introduced the practice of passing on whole estates intact to one heir; to the oldest son.

William the Conqueror was the first database king. His immediate need was to raise a tax, but the compilation of the Domesday book was more than just a glorified audit. It was a complete infantry of everything in the kingdom; shire by shire, pig by pig, who owned what before the coming of the Normans and who owned what now, how much it had been worth then and how much now... when he was given the Domesday book it was like he had been given the keys of the kingdom again. That he had conquered England again. Because it's information was more pregnable than any castle. That its decisions were final as the last judgment.

Two ceremonies took place on Lammas day 1087 at old Sarum. First every noble in England gathered here to take an oath of loyalty to the king. But then came the handing over of the book The ultimate weapon to keep them in line. Now nobody could hold back anything and it was this book- the Domesday book -that made the gathering at old Sarum unique in the history of feudal monarchy in Europe. For the book ultimately was England.

At the very end, Ordericus Vitalis puts into William's mouth an extraordinary deathbed confession so utterly out of character that it seems on the face of it completely incredible. But whether William actually spoke those words or not, they clearly reflected what some- perhaps many people- felt about William the Conqueror. That when all the battles were won, that all the weapons had been laid down... he was what he had always been- a brutal adventurer. The conquest of England was not a righteous crusade but just a grand throw of history's dice.

“I have persecuted the natives of England beyond all reason. Whether gentle or simple I have cruelly oppressed them; many I unjustly disinherited; innumerable multitudes perished through me by famine or the sword……I fell on the English of the northern shires like a ravening lion. I commanded their houses and corn, with all their implements and chattels, to be burnt without distinction, and great herds of cattle and beasts of burden to be butchered whenever they are found. In this way I took revenge on multitudes of both sexes by subjecting them to the calamity of a cruel famine, and so became a barbarous murderer of many thousands, both young and old, of that fine race of people. Having gained the throne of that kingdom by so many crimes I dare not leave it to anyone but God….."