These notes are from the third episode from the series by Simon Schama titled "A History of Britain." Moving on from the Iron Ages to the Battle of Hastings

England 1154 nearly a century after the Battle of Hastings the country has been torn apart by a savage civil war. William the Conqueror was long dead. For 30 years his grandchildren have been locked in a life-or-death struggle for the crown of England. The realm was in ruins. And then there appeared a young king brave and charismatic who stopped the anarchy. His name was Henry and he would become the greatest of all our medieval kings. He should be as well known to us as Henry the 8th or Elizabeth the 1st, but if he is remembered at all today it is as the king who ordered the murder in the cathedral or as the father of the much more famous and impossibly bad King John and the impossibly glamorous Richard the Lionhearted.

Henry II has no great monument to his reign. No horse backed statue of him stands outside Westminster yet he made an indelible mark on our country. The father of the common law; The godfather of the English state. But Henry was cursed and brought down by the church, his children, and most of all by his queen- the older, beautiful, and all powerful Eleanor of Aquitaine.

They ran Britain with a furious energy that entranced or appalled their subjects.and like many family firms they had the capacity for both creation and destruction. What their intelligence built their passions destroyed.

At the height of their power they were the masters of everything that counted in Christendom. Thier England was the linchpin of an Empire that stretched from the Scottish borders to the Pyrenees and much bigger than France itself. Not since the Romans and never again has England been quite so European. The dentist he had its roots in the civil war that was being fought between two cousins Stephen of Blois and Matilda the grandchildren of William the Conqueror. It was Stephen who seized the crown but that wasn't the end of it.

In 1128 Matilda married Geoffrey of Anjou also known as Plantagenet. His family emblem was three lions. Along with his money, power, and territory he also gave Matilda a son -Henry.

This was the age of chivalry when the myth of Arthur and Camelot was at its most popular. It was at this point that Henry was groomed by his parents to take England away from Stephen... To be a new King Arthur... His Guinevere - Eleanor of Aquitaine.

In 1153 Henry Plantagenet crossed the channel. His father Geoffrey had already taken Normandy from Steven so now it was up to Henry to take England. A deal was struck that Stephen would be allowed to die on his throne but Henry would be his heir. Within a year Stephen was dead and Henry and Eleanor were crowned king and queen of England.

Henry spoke virtually no English at all. What he would have grasped though if only for his coronation oath was that Kings of England we're supposed to be both judge and warlord. In fact the coronation oath preserved intact from Edward the Confessor was increasingly being held up as some sort of ideal. Monarch pretty much spelled out the job description of the king of England. One: was protect the church. Two: preserve intact the lands of your ancestors. Three: do justice. four: most sweeping of all suppress evil laws and customs.

It was vow number one though- the protection of the church- which quite unpredictably would cause Henry II the greatest grief. It was to provoke a kind of spiritual civil war. And it's was every bit as unsettling as the feudal civil war and which in its most dreadful hour would end with bloodshed in the cathedral.

Thomas Becket- the first commoner of any kind to make a mark on British history. Became archbishop of Canterbury.

Monarchs had long taken it for granted that they were directly anointed by God (and were) safely above the church. But the popes of this period begged to differ. Kings they said reported to popes and not the other way around. This wasn't just an academic quibble. This was a fight to the death.

There were two flashpoints. The first was whether lawbreaking clergymen could be judged in the king's courts like everyone else. The second was whether bishops had the power to excommunicate royal officials. By making Thomas Becket the archbishop of Canterbury, Henry believed he could depend on someone who would share his view of the subordinate relationship state of church to state. The king was in for a shock.

It all came to a head early in 1164 when Henry summoned a special counsel of the princes of the church and the most important nobles of the realm. There he demanded that they ascent unconditionally to "the customs of the realm." In the end Becket advocated for refusing Henry's demands and ordered his bishops to do the same. This is a position he never budged on.

In October 1164 Becket was brought to trial by Henry II for improper use of funds. The trial broke up with Becket storming out. Convicted on the charges, Becket fled with a small group of followers. 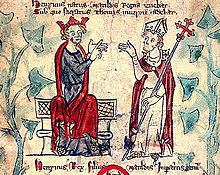 It took two painful years of back and forth diplomacy and increasingly impatient signals from the pope to arrange even talks about talks. After a series of abortive reconciliations in 1170 it looked like peace might finally break out. Henry and Thomas met and spoke for hours. Henry agreed to restore Thomas to his position of authority and to treat Becket's enemies as his own. Henry then told all that he was reconciled with Becket.


Soon disagreements between both men were renewed and Beckett's inability to let bygones be bygones created a deep wedge between himself in the king. Around 6 December 1st 1170, Becket excommunicated many bishops who had stayed loyal to Henry. Henry had a complete meltdown. After all, Becket was a traitor and what happens to traitors...? So be it.

December 29th 1170 around three pm. Four knights arrived at Becket's place of residence and after an ugly conversation Becket left. The knights caught up with him in the chapel and murdered him. "Let's be off," he said. "This fellow won't be getting up again."

The actual murderers got off very lightly. Hiding out in Yorkshire, excommunicated, told to go off on crusade. But the real judgement Henry reserved for himself and the verdict was guilty as charged. In 1174, Henry made a pilgrimage to Canterbury where Becket's blood was said to work miracles. Over the last miles Henry walked barefoot in a hair shirt as Becket had done four years earlier. At the tomb he confessed his sins and was whipped by the monks. However tough his punishment though the blood would never wash away. Henry the hero of the common law would always be remembered as the biggest of England's crowned criminals - the murderer in a cathedral. 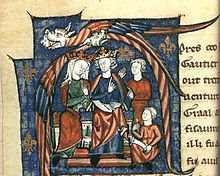 Henry would rule for another 20 years. Long enough to see his embryonic legal system grow into a thriving network of courts. Up and down the land these new courts were to settle not just the usual disputes of blood and mayhem, but all matter of painful rows over inheritances, estates, and properties. How ironic then that the only family that would not accept the king's justice was his own. Because if there was one person that was likely to finger the king- not as judge but as transgressor- it was his wife.

Betrayed and alienated by Henry, Eleanor turn her formidable energy and intellect to the business of getting her justice through her children. She was now determined to do everything she could to convince them that their father was robbing them of their rightful power and dignity. Her four sons rose to the bait.

Young Henry rebelled but ended up dying of dysentery. Geoffrey also rebelled but was trampled by a horse. Richard the Lionheart and the youngest son John were left. 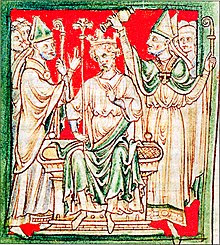 It was on Richard that Eleanor pinned her hopes. She was even prepared to encourage an alliance between Richard and her husband's bitterest enemy- the king of France. In 1189 Richard declared war on his father. Henry face defeat as his barons defected to Richard. He had no choice but to negotiate with Richard which humbled him before his own son. He died two days later... some suggest of a broken heart.

It appeared that few people mourned Henry II. Most had already defected to his son Richard who had already won the public-relations battle. He was already the superstar of the dynasty. To prove it- to show that the old regime had passed and a new glamour had arrived- Richard gave a show-stopping coronation.

A fear of a sinister Jewish plot which triggered a general massacre begin the first Holocaust or pogrom of the Jews. Richard did make strong efforts to forbid these massacres, but he was not around to enforce it. He vanished to the Holy Land to do God's work. 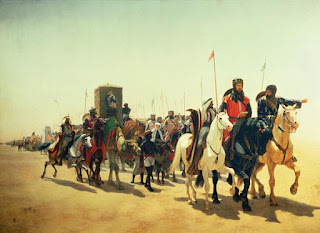 In 1192, when news arrived of Richard's capture on his way back from the crusade, Prince John quickly declared his brother dead and himself king. Eleanor struggled with grief and her inability to deal with the treacheries of her children.

Richard was later ransomed but it left the country bankrupt. On his way home Richard was shot by an arrow and the wound became gangrenous and 10 days later he had died.


Assuming disloyalty he ended up guaranteeing it. 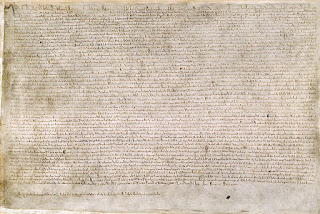 Magna Carta. Even if the Magna Carta is filled with the moans and the bellyaching of the barons that bellyaching turned out to have profound consequences for the future of England.

A generation before the barons couldn't have cared less about the rights of men held in prison for unstated causes. That was what happened to commoners. But under John bad things had happened to them; land stolen, widows hounded, heirs made disappear...

So if it isn't exactly the birth certificate of democracy it is the death certificate of despotism. It spells out for the first time the fundamental principles that the law is not simply the will or the whim of the king. The law is an independent power onto itself. The king could be brought to book for violating it