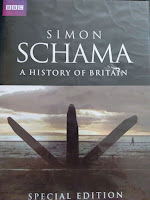 A friend of mine gave me this amazing DVD series on the History of Britain. As I have spent the time perusing it, I took notes for future reference. Most of these notes are in the voice of the narrator and, while in order, only provide a brief summary of the episode and not a full transcription. I am really enjoying this series and intend to do a summary of every episode... although that may take me a few months. Here are my notes for the first episode titled "Beginnings."

From its earliest days Britain was an object of desire.

By 1000 BC things were changing fast. All over the British landscape a protracted struggle for good land was taking place. Forests were cleared so that iron age Britain was not, as was once romantically imagined, an unbroken forest kingdom stretching from Cornwall to Inverness. It was rather a patchwork of open fields dotted here and there with woodland copses giving cover for game -especially wild pigs.

And with tribal manufacturers came trade. The warriors, druid priests, and artists of iron age Britain shipped their wares all over Europe trading with the expanding Roman Empire. In return, with no homegrown grapes or olives, Mediterranean wine and oil arrived in large earthenware jars. So iron age Britain was definitely not the back of beyond. Its tribes may have all led lives separated by custom and language and they may have not had any great capital city, but taken together they added up to something in the world.

And so, in the written annuals of Western history, the islands now had not only a name-Britannia- but a date of 55 BC when Julius Caesar launched his galleys across the channel.

The person we usually think of who embodied British national resistance to Rome- Queen Bouducca of the East Anglian tribe of Iceni- actually came from a family of happy even eager collaborators. It only took a policy of incredible stupidity, arrogance, and brutality on the part of the local Roman governor to turn her from a warm supporter of Rome into its most dangerous enemy.... Her great insurrection ended in a gory, chaotic slaughter.

A world of garrisons and barracks had now become a society in its own right. From the middle of the second century it makes sense to talk about a Romano-British culture. Not just as a colonial veneer imposed on a resentful natives but as a genuine fusion.


And, when in the year of 410 Alaric The Goth sacked Rome and the last two legions parted to prop up the tottering empire, that chill developed into an acute anxiety attack. This is one of the genuinely fateful moments in British history.

Eventually though the Roman adaptations became ever more makeshift; the fabric of Roman life increasingly threadbare until it did indeed fall apart altogether. The island was now divided into 3 utterly different realms. The remains of Britannia hung on in the west. North of the abandoned walls and ports the Scottish tribes for the most part remained pagan, and England, the land of the Anglo-Saxon and Judes, was planted in the east all the way from Kent to the kingdom of Bernicia.

The history of the conversions between the 6th and the 8th centuries is another of those crucial turning points in the history of the British Isles. While the legions had long gone, the shadow of Rome fell once again on these islands. This time though it was an invasion of the soul and the warriors were carrying Christian gospels rather than swords. 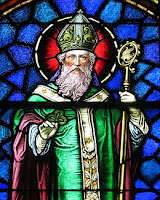 We have to remember that the most famous of the early missionaries to Ireland -Saint Patrick- was in fact a Romano-British aristocrat. (The patrician as he called himself) So there was nothing remotely Irish about the teenager who was kidnapped and sold into slavery by Irish raiders sometime in the early 5th century. It was only after he escaped (probably to Brittany) and ordained... then visited by prophetic dreams that he returned to Ireland... this time the messenger of God's gospel.

Bede was not just the founding father of English history; arguably he was also the first consummate storyteller of all of English literature. He was not exactly well-traveled- he spent his entire life here in Jarrow. It was his masterful grip on narrative that made Bede not just an authentic historian but also a brilliant propagandist for the early church.


The Viking raids that they knew could strike hard and fierce at any moment. In addition to land the Vikings were keen on one other kind of merchandise - people whom they sold as slaves. On the positive side there is one thing that the Vikings managed to do however inadvertently. They created England. By smashing the power of most of the Saxon's kingdoms, the Vikings accomplished what left to themselves the warring tribes could never have managed - some semblance of alliance against a common foe. 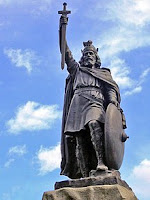 Through Alfred the Great, England got something that it hadn't had since the legions departed; an authentic vision of a realm governed by law and education. A realm which understood it's past and its special destiny as the Western bastion of a Christian Roman world. By the spring of 878 Alfred had managed to piece together an improvised alliance of resistance. During Alfred's lifetime the idea of a United English kingdom had become conceivable and even desirable.

Alfred's grandson would be crowned the first king of England in Bath.