Sharks come in many sizes and shapes and have a great deal of diversity in the over 500 plus species of living animals. Currently, science divide sharks into 9 specific orders; there are actually 13, but four orders of sharks are entirely extinct. And all sharks -big and small- fit into these categories.

1. Carcharhiniformes, otherwise known as the ground sharks or whaler sharks, include some of the most well known sharks. There are over 270 species making this order the largest of all shark orders. It includes the tiger shark, hammerhead sharks, hound shark, cat shark, shy eye shark, all of the reef sharks, and the bull shark. Some traits that differentiates these sharks from others is their lack of an inner eyelid and enlongated snouts. They average eighteen inches to twenty feet in length.

2. The order Echinorhiniforme contained only two sharks; The prickly shark and the bramble shark. These sharks are named due to the thorn like denticles covering their skin and are slow swimming sharks that dwell in the bottoms of their chosen environments

3. Lamniformes, otherwise known as the mackerel sharks, include the most famous shark- the great white. There are 15 species in this order which also includes the megamouth shark, mako shark, thresher shark, goblin shark, porbeagle shark, sand tiger shark, and basking shark. They have large jaws and give birth to live offspring. Sometimes their offspring will eat their siblings in the womb before birth. They range from 3 to 32 feet in length 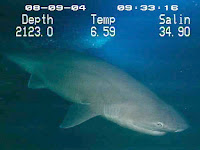 4. The order Hexanchiformes, otherwise known as the six gill or cow sharks, contains only seven species and are the rarest and most primitive of all living sharks. Their defining characteristics include six or seven gill slits (all other sharks have five gill slits) and they have only one dorsal fin. This order contains the frilled shark, the cow shark, and the broadnose seven gill. They prefer cold, deep water.

5. Heterodontiforme is the name of the order that contains the bullhead sharks or horned sharks. This order only contains nine species which include the horn shark, Port Jackson shark, and the Zebra Bullhead shark. Its defining characteristic is a big head with large brows. They live off of crustaceans, mollusks, and sea urchins.

6. Squatiniformes, otherwise known as the angel sharks, are sharks that have bodies that are flattened like ray's / skates and live on the bottom of the sea and sandy places where they can easily hide. They average 4 to 6 feet in length from nose to tail end. This order includes the clouded angelfish and sand devil. 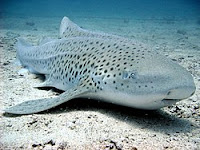 7. Orectolobiformes, also known as the carpet sharks or the wobbegongs, are defined by the ornate skin patterns that look like fancy carpets, nasel barbels as well as having a mouth in front of their eyes. Comprised of 39 species, this is the most diverse order of sharks and they come in all shapes and sizes. They range from 12" to 46 feet in length and include the nurse sharks, wobbegong, bamboo sharks, zebra shark, and the whale shark- the largest fish in the world.

9. Order Pristiophoriformes contains the saw sharks or carpenter sharks. It's members have long, flat, toothy saw-like snouts. They average out at 5 feet long and are bottom dwellers. Their food supply varies between small fish, squid, and Crustaceans. They also give birth to live young. Members of this order include the common sawshark, Queenland sawshark, and knifetooth sawshark.