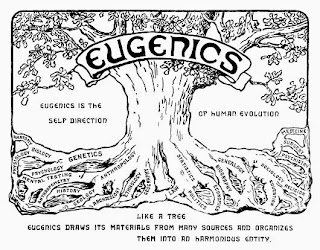 The study of human history shows the many achievements and journeys of our race. From our humble beginnings, through the development of culture, religion, communities, hierarchy and power structures, to what and who we are today... well, as a less-than-humble commercial suggests- 'You've come a long way, Baby!’ The path to the twenty-first century has not been smooth nor painless and, like our predecessors, we view ourselves, our lives, and our world as an improved and civilized place with the human race as the most intelligent and virtuous beings on it. Looking at the history of the human race, I see many recurring themes that are a part of every society; hope, love, beauty, want, etc. The theme of self-improvement or change that benefits ourselves and, in turn, society has been a reappearing idea that became more pronounced after the Enlightenment and the Renaissance along with the concept of improving groups of people to improve society. However, like all virtues, self-improvement or personal development can come with a dark side that is exposed when the virtue itself is placed on a pedestal or idolized without regard to the thoughts and rights of those we consider 'lesser' than us. When this happens, any noble or virtuous ideas are shown to be the shallow horrors that they can become ... the virtue is pulled and stretched out of its normal view to a pained and stretched mask of what it actually is. During the twentieth century, the themes of human breeding, genetics, prejudice, self-improvement and social progress collided to serve the virtue of better breeding and health of human beings. Eugenics, which means 'well born', was created in

America. This movement was so strong and large that it was able to spread into other cultures and countries before its horrors and Machiavellianism tendencies became apparent enough to create a sizeable opposition that attempted to crush it. In response to the common belief that eugenics was no longer an important movement after World War II, I will discuss briefly the history of eugenics in the United States before WWII and then analyze the way the movement changed after the war. I will show that the ideas behind eugenics are still alive, well and being acted upon in our society today. Recognizing the way the movement itself has adapted to our changing culture and its opposition helps place us in an informed position to focus on the fearful and reactive areas of ourselves and our society so we may work to create a more lasting and peaceful change in our thoughts and fears. Hopefully, that will help us change how we act upon our fears and prejudices and how we justify acting on them in our communities and society.

The idea of eugenics is a simple idea with more complex answers. The word was coined in 1883 by Sir Francis Galton who advocated the scientific regulation of human breeding to ensure that 'better' genes had a larger chance of predominating in the continuation of the human species. Eugenics encompassed the progress of medical practice and scientific thought and recognized the inseparable relationship between medicine and social progress. To be blunt, the idea of the eugenics movement was that better breeding would lead to a healthier population and was an effective way to deal with social problems. It provided a comfortable way to rationalize people's prejudices about race, poverty, etc... and also suggested that 'undesirable traits' could be minimized within a few generations if people were only brave and good enough to work towards it. Undesirable traits that were thought

to be correctable through eugenical reproduction included epilepsy and other physical disabilities, alcoholism, tendencies towards rape (rapists), and other criminal behavior, promiscuity, and more. Races and immigrants that were not of Anglo-Saxon heritage were also of 'suspect' genetic material and poverty was thought to be a characteristic of genetic inferiority. Always a controversial movement, eugenics has had its loyal adherents since its conception and even the tragedy and knowledge of the German Holocaust in World War II didn't change those who believed and followed its tenets. Before the war, it was common to institutionalize the ‘feebleminded’ or those that those in power worried about reproducing. The rationale was that the only way to stop a living being from reproducing was to limit its movements, monitor it in risky situations, or make it biologically impossible for breeding to take place. Institutions for those who were ill, the ‘feebleminded’ or those who had medical difficulties were created to isolate and remove those individuals from active society. Laws were passed that forbade marriages between people who had specific medical or mental health problems. However, locking people up costs a lot of money and the inability to remove everyone from the community that fit the criteria (due to lack of funds or institutional space) made the original eugenics process less effective than its early adherents wished. Sterilization allowed the individuals to be released back into their local communities to support themselves while not crating any more individuals like ‘them’. Because of that, sterilization became the easy, cheap, and irreversible weapon in the eugenics supporter’s arsenal.

The Holocaust did shift some of the popular views of how eugenics should work, but didn’t change any of the eugenic and popular thoughts of a large part of the populace nor did it change the most popular procedures that were used. In 1927, psychologist George Ordahl explained at the Commonwealth Club in San Francisco that if it was possible to calculate “the economic burden of the moron” that [was] paid for by taxpayers, “every patriotic citizen would become a eugenicist in search of methods of prevention even more drastic than any now known.” The tone may have softened since WWII, but not by much. Dr. Charles Gamble wrote in 1947, “Tomorrow's population should be produced by today's best human material” and he complain[ed] that only one in forty-one people with severe mental illness had been sterilized, leaving dozens of others to spread defective genes. In 1966, C. Lee Buxton published an article titled 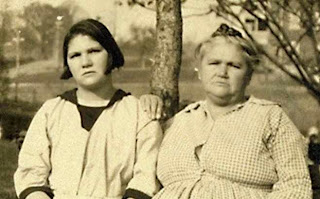 “The Doctor’s Responsibility in Population Control” in which he reminded his colleges that “medical responsibility demands more action than just passing resolutions and making recommendations...” and advocated sterilization as a solution to the ‘problem’ of unwed mothers on welfare. In his view, the problem was multiplying “because the medical profession has controlled the death rate but has done very little about the birth rate.” The exact number of women- for women were by far the more common victims of eugenics- involuntarily sterilized after the end of World War II into the 1980’s remains unknown due to the lack of collected statistics, listings in medical records of coerced sterilizations as ‘voluntary’, the social and reluctance of women to file formal complaints, and the ignorance of individuals who never knew or were never told that they had been sterilized. (The reason I stop at the 1980’s is due to a lack of information on current trends.)

Euthanasia programs never gained popular ground in the Unites States, but did have their supporters before WWII. One egregious example is Dr. Harry Haiselden who advocated and practiced denial of life saving treatment (even of newborns) and thought it was acceptable for an institution to give inmates tuberculosis through infected milk because only those with ‘defective’ genes would get the disease and die. In the end, after the Holocaust, sterilization was the procedure of choice and was perfectly legal through the decision in Buck vs Bell decided by the Supreme Court. This court decision has never been overturned and has been used to support involuntary sterilizations since its publication and over the last sixty years. Here are some examples.... 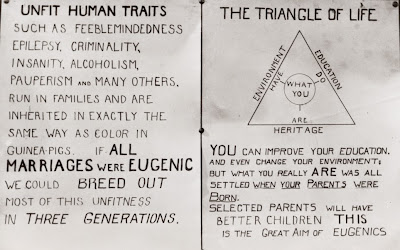