Eugenics in America after World War II /1945 : An Introduction to the Term Paper

I know a few people have been waiting for this paper so here it is! I will need to break up the paper into a few posts but it will give a very basic outline of eugenics before World War II and our influence on other countries… and then move into how eugenics changed and what groups were affected by these legal policies. I do give current examples when I was able to find some and I am hopeful that after I share this research, maybe we can have a discussion about how to create community awareness and change in our areas…..

Here is my abstract paragraph: 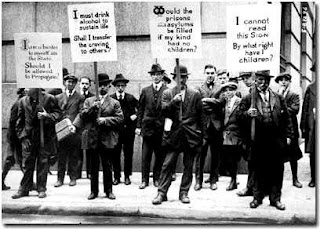 The study of human history shows the many achievements and journeys of our race. From our humble beginnings, through the development of culture, religion, communities, hierarchy and power structures, to what and who we are today... well, as a less-than-humble commercial suggests- 'You've come a long way, Baby!' The path to the twenty-first century has not been smooth nor painless and, like our predecessors, we view ourselves, our lives, and our world as an improved and civilized place with the human race as the most intelligent and virtuous beings on it. Looking at the history of the human race, I see many recurring themes that are a part of every society; hope, love, beauty, want, etc. The theme of self-improvement or change that benefits ourselves and, in turn, society has been a reappearing idea that became more pronounced after the Enlightenment and the Renaissance along with the concept of improving groups of people to improve society. However, like all virtues, self-improvement or personal development can come with a dark side that is exposed when the virtue itself is placed on a pedestal or idolized without regard to the thoughts and rights of those we consider 'lesser' than us. When this happens, any noble or virtuous ideas are shown to be the shallow horrors that they can become ... the virtue is pulled and stretched out of its normal view to a pained and stretched mask of what it actually is. During the twentieth century, the themes of human breeding, genetics, prejudice, self-improvement and social progress collided to serve the virtue of better breeding and health of human beings. Eugenics, which means 'well born', was born and This movement was created in America and was so strong and large that it was able to spawn into other cultures and countries before its horrors and Machiavellianism tendencies became apparent enough to create a sizeable opposition that attempted to crush it. In response to the common belief that eugenics was no longer an important movement after World War II, I will discuss briefly the history of eugenics in the United States before WWII and then analyze the way the movement changed after the war. I will show that the ideas behind eugenics are still alive, well and being acted upon in our recent history. Recognizing the way the movement itself has adapted to our changing culture and its opposition helps place us in an informed position to focus on the fearful and reactive areas of ourselves and our society so we may work to create a more lasting and peaceful change in our thoughts and fears. Hopefully, that will help us change how we act upon our fears and prejudices and how we justify acting on them in our communities and society. 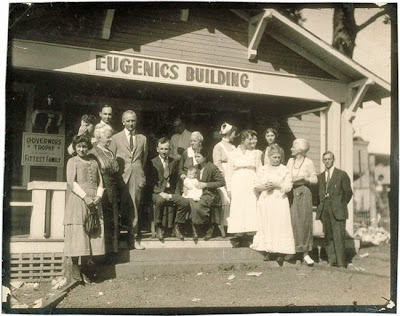 Posted by Badgerdown at 5:30 PM