I Don't Believe in Reincarnation, but.... 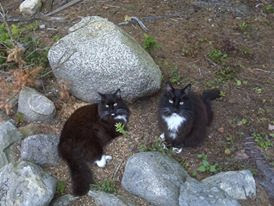 I have found myself, eyebrows raised, several times over the last few weeks as I have observed Bear and his behavior around my home. In my past, I have only known one cat who was almost frightening in his intensity, his emotions and his behavior. Jeeves was in my life for over twenty years and is the cat that I miss the very most in my dreams and in odd moments in my life and thoughts. I got him with his brother, Achilles, when they were older kittens. Jeeves was a strong and almost arrogant cat... one filled with purpose and fiercely protective of his brother as well as me. He was an amazing hunter and active personality... not very restful at all. And he was very much bizarre in his desire to try anything- he would jump into the fridge and steal food, climb onto the counters and steal vegetables, and even drag his brother around cleaning him. As he grew older, he could read my emotions and would respond accordingly. He would allow strong cuddling when I was feeling sad and devastated, and would sit next to me and purr when I couldn't sleep to help lull me into the deep. He would nudge me awake when I was having bad dreams and would sit with me while I would force myself to calm and relax again. He also had a bizarre habit of knowing when I was watching something or reading a book that was bad for me and he would do what he could to end it- by sitting on the computer or in front of the screen, laying down on or biting the book, meowing and pressing himself in front of my eyes. Sometimes it would frustrate me, but always I felt his love. He loved life and me so much that he was unwilling to go...especially as my husband began to take everything. He would follow me everywhere and watch me, cuddling, talking, listening... like a loyal security angel. Old and with failing kidneys, he fought and found joy in every day and only allowed death to take him when he had no choice. I held him in my arms as he left and I have never had a companion like him, before or since... until now. 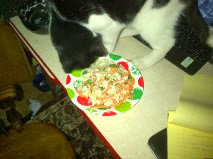 Bear is different in some physical characteristics. Both are black and white, but different- Jeeves with his mostly black medium haired tuxedo and Bear with a mostly white coat and a streak of black across his head, back, and tail with a few misc spots here and there. Jeeves was only slightly larger than an average cat while Bear is already huge and still hasn't finished growing into his feet yet. Both are male with a strength and confidence in themselves and the world. But the differences seem to end there... Bear has begun to steal vegetables and just this morning I caught him stealing some of my cabbage salad. He not only steals vegetables, but he also steals frosting, cake, chocolate chips, cereal and mild fruit. He comes and sits by my head at night and purrs me to sleep and wakes me when my body shudders with dreams. He sometimes forces me to rest by sitting on me and pushing me down into a prone position and as I pet and prod him I tend to smile and sleep... his weight solid and soothing. When I feel sad he has started to run over to me and appears to be trying to figure things out... he is definitely starting to understand the ways I feel and think. And as I have been putting in movies to watch for class that make me feel uncomfortable, Bear has become annoyingly active in his desire to sit on the computer and walk all over the keys until the screen goes blank. If I pick up a book on the same subjects, he sits on them too... pick up a comic book or science fiction... and he just purrs and leaves me alone. It's a bit overwhelming and beautiful and astonishing. 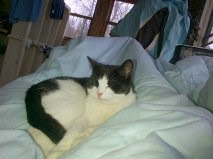 Two years apart between death and birth, but it feels like that noble one is back in my life. Others who have noticed have pointed out the strong parallels between the two cats including my ex-husband. I do not believe in reincarnation nor do I really believe that cats have nine lives... it couldn't be reincarnation anyway because of the long gap in time. But what it clearly seems to be is a small miracle just for me. A gift that many other people might not appreciate, but one that means the world to me. Heavenly Father knows my needs and my struggles and helps fulfill them. I have a reason to rush home now and feel genuine excitement to do so... I haven't felt that way since well, Rob and Bug. I watch Bear stir up the others into long periods of stampeding and I smile... I am looking forward to the next few years. :)

Posted by Badgerdown at 7:19 PM