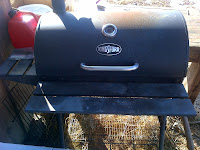 So, another thing that I have totally been able to enjoy this winter came to me through a fluke and through the generosity (or laziness, I'm not sure which) of the previous tenant in my cabin. When he left, he didn't take quite a few pieces of furniture with him including a couch and a large barbeque grill – he also left a bobcat head skin too. :/ The couch was removed in pieces with the help of some good friends and placed in my front yard for future removal and I left the barbeque grill sitting outside right next to my porch. I have been concentrating more about getting moved in and settled than I have been worrying about my lawn or outdoor aesthetics.

One thing I have learned from living in the woods over the last decade is that nature doesn’t waste and many animals can adapt to our presence in their space and environment. And so a few weeks after I moved in, I opened the top lid of the barbeque grill to find not only what was left of the bobcat head, but what at first glance looked like the head itself had exploded outward. For the first few seconds, it looked like a brain that had curdled and in the taunt pressure of a sealed container that finally gives up under the insistence of the need for relief... white and cream and fluff and wet. After two quick blinks, I realized that what I was actually seeing was cotton stuffing from the couch I had so callously thrown into the front yard. That cotton batting along with the cat pelt had been shaped into an oval like ball... a warm and snug home. And as I watched, I discovered the occupants. 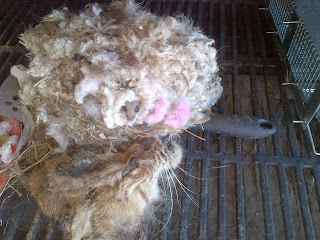 Within a few seconds, two mice peaked out of their nest (the eye holes in the pelt were their doors. :O ) and after a brief thought, I quickly walked away after shutting the lid. As it was getting cold, I didn’t want the mice to feel like they had to move and find a new place to live. I felt like I had been given an expected gift... one that I knew was there, but I couldn’t focus on too much... a quiet joy that I could hold close to my heart. Over the last month I have checked on them about once a week and have even made them a few small meals. It has been really fun! It's such a blessing to see: two small animals trying to survive in the world and being chased out of the house on the eve of winter. They quickly made plans and decide on a safe new place. And over a few days, they work- each one moving from the grill to the couch and ripping pieces of its stuffing into chunks and then hauling them back to the grill... having to climb up wood walls but also leap to the chimney to actually get back into the grill. Over time, they still seem comfortable and I know longer see the gruesome image that I originally saw when I opened the lid. Bug likes to look in on his visits and the mice look healthy and in good cheer. Sometimes its the small, unexpected things that not only give us a smile, but keep it on our face. And these two small creatures are doing that for me. I see their survival as a talisman against the cold and the darkness that comes this time of year. So, smile. For the Father even watches over the mice in his fields... so he watches over us! 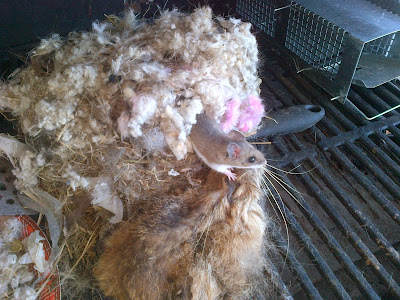 Posted by Badgerdown at 5:34 PM