The Rise of Moscow after the Mongol Conquest 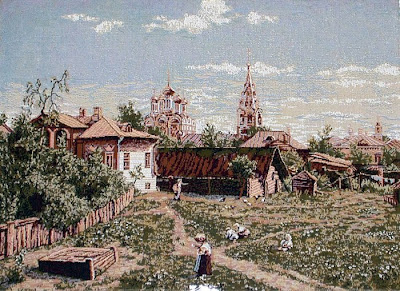 During the years of 1237-1240, Batu Khan and his armies overwhelmed the Russian military forces and the lands of Kievan Rus became a part of the vast Mongolian Empire- or the Golden Horde. Many cities were the worst for wear from this war, and the capital city of Kiev was no exception. Kiev was already a 'falling star' by the time that Batu and his armies arrived- in 1169, the city was captured and sacked by a Russian Prince named Andrei Bogoyubsky who then promptly moved his capital to the newer city of Vladimir- after accepting the title of 'Grand Prince' of course. Kiev's location was no longer as much of an asset as it had been at one time due to trade route changes and political re-directs so the country-state of Kievan Rus was dividing into two 'groups'... and groups that really had little communication with each other. When the Mongol armies arrived at Kiev, they razed the city to the ground and decimated the population who had resided there. So the time was ripe for the ascension of a new capital city in the Russian lands... and Moscow was ready and amply endowed through several circumstances and means to rise to the top of quarreling princes/cities to snatch at the number one spot. This paper will discuss the circumstances and advantages that the small city of Moscow had that allowed for its growth and dominance during the final years of Kievan Rus' existence and the leadership of the Golden Horde.

The land on which sits the current city of Moscow was inhabited long before the Russian city was built and named. Evidence shows early evidence of humans dating to the Stone Age with evidence from the Schukinskaya Neolithic site, the Fatyanovskaya culture burial ground as well as other sites. The first mention of the existence of the city of Moscow was in 1147 when it was used as a meeting place for two princes-Yuri Dolgorukiy and Sviatoslav Olgovich. In 1156, Yuri Dolgorukiy built a wooden wall and a moat around the small city... and he is the man generally credited with the founding of the city of Moscow., This 'mere village' was situated near Moska river and had ready access to the Oka, Volga, and Dnieper, and Don rivers and was rather insignificant when compared to other new principalities of its time: Suzdal, Vladimir, Tver, and Riazan are examples. Situated in the northeast section of Kievan Rus, the city sat on a relatively flat geography with moderate temperatures and huge swaths of forests. This small city was also ideally located in the migration path of populations traveling from the middle Dnieper to the northeast section of the state. The impact of the Mongols on the Kieven Rus state can be described as inconsistent- in this case location really does matter. In some areas, the devastation was large and hard to overcome such as in Kiev and Vladimir. In other areas the impact of the invasion was less felt and so areas such as Moscow had less problems with depopulation. In fact, Moscow notably had an influx of population due to being a less devastated and more protected settlement.

During the years of the Mongol oppression or 'yoke' as it was sometimes called, the Russian aristocracy had a custom of how inheritance was divided between the male children- or princes- of the household. This system, called the 'appanage' system describes a system where it was common for a Russian prince to divide his land into as many 'appanages' as they had male children. In the principality of Moscow, the ruling prince followed the system, but tweaked it just enough to change the outcome of the inheritance. Instead of dividing the property into equal pieces, which over generations would become smaller to non-existent when there were too many princes around, the ruling prince would leave a major share of his estate to the eldest son and only small pieces to the other sons. This had the effect of allowing the eldest sons to dominate his brothers and take their lands in arguments... whereas in other areas civil wars between princes were much more evenly matched.

This form of primogenitive inheritance helped give Moscow an edge over other Russian territories. In the beginning Moscow was considered of such little significance, that it was an inheritance to the very youngest son of Alexander Nevsky named Daniel in 1263. Daniel attacked and/or inherited a few other 'appendages' and was able to leave an enlarged inheritance to his son. One of his prodigy, Ivan I, was known to collaborate with the mongols and was considered so trustworthy by the Khans that he was given the title of Grand Prince and was put in charge of tax collecting throughout much of the Rus lands around 1331. Using his profits to buy more land or collecting more appanages through force, Ivan increased the amount of his holdings five times. Ivan also helped to transfer the residence of the chief bishop of the orthodox church to Moscow (from Vladimir) and so he was able to count on support from the church for his actions over other rulers and cities. Ivan I also had the advantage of having mongol troops available for his command to fight other Russian prices or kinsmen who he had a disagreements with.

So while other princes were spending their time dealing with more princes and land to fight with/over and not having good success, the rulers of Moscow were quietly successful in their quest to increase the size of their holdings. Individual princes from all over attempted to secure the support, influence and even military might of the Mongols for their own endeavors or for the title of Grand Prince. So inter-dynastic quarrels could now be brought and appealed to the Khan for settlement... and many were. It can certainly be said that the Russian princes were not passive when dealing with succession problems and many times the Khan was called upon to deal with these family struggles. But one specific situations helped move the Khan of the Golden Horde to look more favorably upon Moscow. Moscow's main challenger for the title of Grand Prince and for the tax patent was the city of Tver and the rivalry between these two cities had been fierce for quite some time. (This civil war between the two cities lasted about 25 years. One source describes the contest between these two cities are full of 'dramatic episodes of court intrigue, highway robbery, murder, and war.) However, in 1327, a violent anti-Mongol riot broke out in Tver with the death of several mongol officials- which effectively ended the Khans strategy of allowing each of the cities to hope to get his 'favor'. The army of the Golden Horde attacked the town of Tver, its neighbors and devastated the cities... among the leaders of the troops for this attack was Prince Ivan of Moscow. It was also thought that the city of Tver was becoming political allies of Lithuania- a traditional enemy which caused some worry to the Mongol Khan. 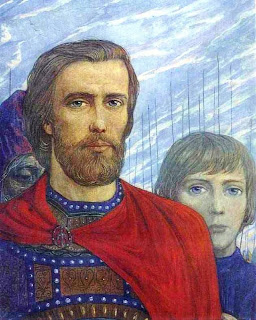 Due to the calculation and successful implementation of the 'appanage' system by the princes of Moscow as well as the implicit support of the Golden Horde, the military might of Moscow over other Russian principalities was fairly assured. So, it should not have come to the surprise of anyone that as the rulers of Moscow grew more powerful, the yoke of oppression would be less tolerable. In 1378, Dmitri Donskoi and his army beat a small Mongolian army at the Battle of the Vozha River and in 1380, an alliance of Moscow princes defeated the Mongol alliance at the Battle of Kulikovo- marking the beginning of the end of the Golden Horde's power in Russia. There is some question of who the winner was in this last battle if you are looking at it from the military point of view, but from the moral and human point of view, Russians saw that the mongols could be successfully challenged and that 'Moscow' was the champion 'of the oppressed nation'...and Dmitri Donskoi was a hero for openly challenging the Mongol army/occupation. His son Vasily I was the first prince since the occupation to have been named successor of a city in a will without the prior approval of the Khan and he started his reign by sending 'gifts' to the Mongols and not the full tribute. 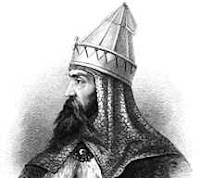 The empire of the Golden Horde began to disintegrate around the reign of Ivan III- a prince of Moscow, who greatly expanded the territory under the control of the city and laid the foundation for the coming Russian empire that was ruled by czars in an autocratic system. By the time Ivan III had completed his territory grabs, he had all the land of Russia under his control and a unified nation- in a way Kievan Rus had never been. For decades, the Mongols had been experiencing internal conflict with fairly frequent overthrows and a new 'Khan' designated.

In conclusion, the world and the life that lives on it is experiencing constant change. Kiev, at one time, had all the advantages at her feet between water access, land, trade, people, etc... But as the world changed, Kiev's 'star' was no longer so advantageously aligned and another 'star' could rise. And as the state grew in population, Moscow is a city that is more centrally located- Kiev was very much in the south of the state. Also, travel and communication from Moscow around the state would have been easier due to its abundance of close waterways. Through luck, sheer cunning, and natural advantages, the city of Moscow rose to a prominence that it has continued to this day. From a small, meager village in 1147 to the city that now houses 10,563,038 people, Moscow has become the largest city in the state of Russia... and a city with a vivid, living history that can be seen in its buildings and people today. 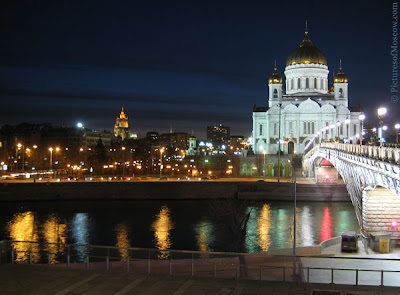 Posted by Badgerdown at 7:48 AM