The Late Kievan Era: Vsevolod III and the Early Development of Ukraine

During the reign of Vladimir I, the country-state of Kievan Rus was brought into stability, Christianity, as well as economic security. After his son's were placed in positions of power in cities around the state with ready militias and some autonomy, it looked as though Kievan Rus was ready for a golden age of peace and prosperity. This was not to be and right before his death in 1015 AD, Vladimir's many sons began to fight for more control, larger land areas and supreme power over all as well as wealth. This bloody infighting continued with little respite as different princes began to exert more control over their lands and fight off invaders- whether 'relative' or foe. For almost one hundred years, brothers killed brothers and other relatives with a few brief periods of stability between periods of strife and civil war. The next ruler of note was Vladimir Monomakh in 1113 AD. However, by 1132 Ad, Kievan Rus was beginning to seriously divide and fragment due to internal tensions between the differing princes and the city of Kiev could no longer be counted on to produce an occasional strong and unifying ruler. Other economies and other political centers began to assume more importance during this time including the cities Vladimir-Suzdal (in Suzdalia), Galicia-Volhynia, and Novgorod... and another hundred years of various times of vague calm and civil war were to commence. During this time, a large period of relative calm and economic success was brought about by the rule of Vsevolod III. He lived from 1154-1212 and was known as the 'Grand Prince' as well as by the name Vsevolod the 'Big Nest'- due to his fourteen children. In this paper, I will discuss the life and successes of Vsevolod III, some of the reasons for his success, and the populating of the lands we now call Ukraine- or “the breadbasket of Europe”. 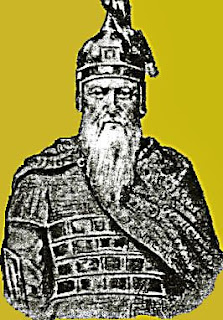 Vsevolod was one of the children of Yuri Dolgorukivi who is known as the founder of the city named Moscow around the year 1156.(Yuri I) It is not known exactly who is his mother was (he was the 10th/11th of fifteen known children, but historical speculation suggests his mother was Helene Komnene, a Greek princess who took Vsevolod with her to Constantinople after his father's death. It was in Constantinople at the Komnenoi court that he spent his childhood, returning to Kievan Rus in 1170 and possibly visited Tbilisi where he might have met his future wife. Before 1186 Vsevolod married his first wife, Mary Shvarnovna of Ossetia- she bore him 14 known children and died in 1206. Mary devoted her life to works of 'piety' (and clearly having children!) and was later glorified as a saint in the church. In either 1207 or 1209, Vsevolod married Liubov Vasilkovna, the daughter of Vasilko Bryacheslavich who was Prince of Vitebsk- they had no children that are known. 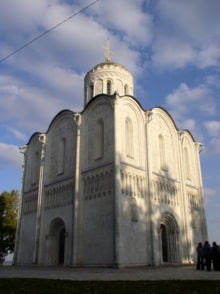 During the early parts of his reign, Vsevolod participated in many military struggles and was not known for being merciful. He increased his holdings by strengthening the defenses on the middle Volga, building outposts along the northern Dvina, seizing towns from Novgorod, and appropriating its lands along the Upper Volga. He had limited success, however, in bringing Novgorod itself under his control. He put people in charge of areas who would do his will and was not accepting or tolerant of disobedience. He was known as a great military commander and in “The Tale of Igor's Campaign” it is written - “Great prince Vsevolod! Don't you think of flying here from afar to safeguard the paternal golden throne of Kiev? For you can with your oars scatter in drops the Volga, and with your helmets scoop dry the Don.” For the church, he was much more generous and in his capital city of Vladimir he had built the Cathedral of St Demetrius in 1197. When the Assumption Cathedral was destroyed by a large fire in 1185, he had it rebuilt under his direction. And around the year 1200, his wife Mary founded the Princess Convent presumably with his blessing.

During his life time, he was acknowledged as the dynasty's senior prince, but Vsevolod focused his attention on his lands and of the neighboring principalities of Rianzan and Murom. His sons, following their father's example, devoted themselves to their northern concerns and withdrew from 'southern' politics. Vsevolod III ruled for 36 six years until his death on April 14, 1212 of natural causes at the age of 58 (a rare way to die for a military man!)

So by 1200, the northeastern area of Kievan Rus known as Suzdalia had become quite important... and its ruler Vsevolod III had dominated the other princes in the south for the over quarter century that he had been in power. There are a few clear reasons that Vsevolod III was able to be so successful in his quest for power and wealth. One important reason was his luck of geography- Suzdalia had many rivers including control of most of the upper Volga river. Some of these rivers flowed in and out of neighboring territories which gave Suzdalia an opportunity to act as a middleman between other states that their ruler did not hesitate to take advantage of. In addition, the soil of the area was rich and fertile. Agriculture was easier to develop in this area than in other parts of the Kievan Rus state. When you also add the fact that Suzdalia had fewer problems with foreign enemies than some of its southern counterparts- and by the 12th century, its primary enemy the Volga Bulgars were on the defensive and less likely to attack.... it is not surprising that many new cities sprang up in this state. All of these factors would have made migration to this area quite attractive to many people which can also help explain how the population grew so quickly around this time. Most of the migration appears to be Slavic populations moving to the safer areas to avoid the constant incursions by nomadic tribes that continued in the south. It should also be mentioned that because the Suzdalia area was an area of high migration, it gave the princes more power than the rulers of the older, more entrenched areas. Trade would have been a good reliable source of income during this time with fewer enemies, lots of 'controlled' rivers and waterways, more individuals to make or grow goods, and the possibility of acting as a middleman on some rivers to neighboring states. An 18th century Russian historian named V.N. Tatishchev states “the Volga Bulgars were constantly trading in Suzdalia where they sold grain, valuable objects, cloth and other goods around the Volga and Oka.” Other sources suggest that trade was a very common occurrence during this time before the Mongol invasion.

The territory that we now call Ukraine still has almost all of the same geological benefits that were exploited during the time of Vsevolod. The soil is still rich and will produce large high-quality yields. It had heavy forests in the twelfth century which would have been used for housing, heat, and trade. It had plenty of rivers for drinking water, agriculture and animal husbandry, travel, etc... Animals for fur and/or food would have been fairly easy to find as well. Add the idea that this area would be mostly safe from invaders and it would be hard to imagine why everyone in the area didn't move there! And several sources describe the rich and frequent trade in this area... as well as the thriving culture.

I found a few things interesting when I was researching this paper. For instance, I laughed out loud at finding a genealogy website that showed the links between George Washington and Vsevolod III... and all sorts of others! I was also amused to find that this great man has his own Facebook page- it doesn't look like it is updated frequently, but...wow! And one site helped me to place this time frame with more clarity in my mind because it linked the year of Vsevolod's death with the failure of the children's crusades- I think one of the worst parts of history that I have ever studied... or at least the worst ideas I have ever heard of. The Suzdalia state sounds like it had many places in which it would be possible to work for a living, enjoy some medium of safety and also have the opportunity for culture. This was a really fascinating research project... and so I look forward to the next one!

Posted by Badgerdown at 8:18 PM