New Thoughts on a New Crisis

During the first week of December 2010, parts of the Red Sea played host to a biological murder mystery as well as to a huge amount of unwanted global publicity. As an added 'bonus', the situation almost correctly mimicked a situation in a well known horror book ('Jaws' written by Peter Benchley and published in 1974) which added to the world wide furor. 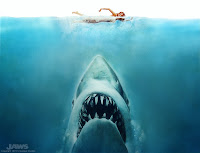 For those who have not read the novel 'Jaws', it is centered on a killer great white shark. The author Peter Benchley writes about an animal 'impelled to attack', an animal that 'exists on instinct and impulse', 'aren't very bright', and a 'maniac running around loose, killing people whenever he felt like it'. Other quotes include: "There is a creature alive today without passion... without logic... A mindless eating machine. It lives to kill." The plot of the book is fairly simple. A great white shark kills some people in the ocean off of a small seashore town in the northeastern United States. The police chief tries to close the beaches, but is overruled by the local major who is worried about the tourist industry. The beaches remain open and more people are killed by the shark. A shark expert is called to kill the shark and the shark is destroyed at the end of the book. The movie that was released in 1975 is centered around this simplified plot- leaving out the subplots for the most part.

The situation that has recently cropped up in the Red Sea is not really different. A shark- or more than one – attacked four people in two days. All four individuals survived and the local governor (Mohammed Shosha) declared the beaches closed for 48 hours. After two sharks were killed during that time, he then reopened the beaches and declared that the danger was past. True to the book, a woman standing chest deep in water was attacked and died almost immediately. Sharks sightings in this area are rare and attacks are rarer still- while five swimmers were attacked in six days recently, there have been only six reported shark attacks in the last decade in this area until now. The beaches were then closed to swimming and will be indefinitely, and hunters have been out looking for the sharks suspected 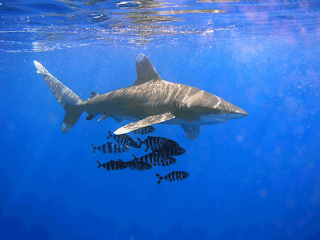 . The one major twist is that these attacks appear to have been committed by members of the oceanic white-tip and the mako shark population- and add that scientist believe that one specific shark was responsible for two of the attacks- a finding that is unprecedented... well, outside of Peter Benchley's book of course. Add to that the idea that oceanic white-tip sharks are not considered seriously dangerous sharks for people and are not listed in the top killers.... and this story sounds a wee bit scary! 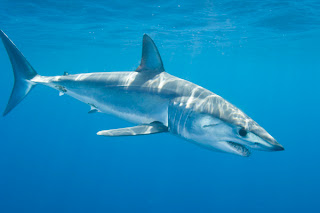 The mako shark that attacked and caused the fatality has been caught and confirmed by checking its jaws/teeth. The oceanic white-tip is still at large.

There are lots of theories about why this 'tragedy' happened. There are thoughts that the fish supply is low causing sharks to have to look harder for food. Others have suggested that snorkelers who feed fish illegally are causing the fish to come closer to land... and bringing their predators with them. Other suggestions include the idea that illegal carcass dumping off shore could be conditioning the sharks to find food closer to the shore making humans more at risk. And other theories that are a tad less likely are climate change and possible Isreali plots- I swear I didn't make that up! The only thing that scientists seem to agree on is that these attacks are the result of humans disrupting the environmental balance in the area. My first thought upon hearing about these attacks was that the sharks are having a harder time finding food. It is also telling that the humans were a 'mistake' attack because almost all survived- they were stalked, bitten and then the shark left-recognizing that this wasn't his typical food. (that's a guess) Let's be blunt- if the shark wanted to eat the humans, they would have had no problems doing so and no one in these situations could have stopped them.

A lot of research has been done... and scientists have studied and discovered a lot more information about sharks – not just great white sharks) since the 1974 publishing of the novel that devastated beach tourist areas across the world by causing panic and vacation changes by thousands of people. We know that sharks are not animals that are looking to eat us. We know quite a few facts including

1. Sharks attack in three ways: the hit-and-run, the bump-and-bite, and the sneak attack. The sneak attack is more likely to happen during the time periods of dusk or dawn and also in murky water. The hit-and-run is the most common where a shark sees a piece of us moving (a hand or a foot perhaps) and attacks thinking it is a fish. Realizing that it made an error, the shark lets go and leaves most of the time. The bump-and-bite is the most dangerous as the shark bumps you to see what you are... and if it decides that you are food will attack wholeheartedly.

2. The three sharks that are more likely to attack humans are the bull shark, the great white shark, and the tiger shark. Each of these sharks have different behavior patterns, a different diet, and a different way for attacking prey. For instance tiger and bull sharks tend to hunt at night while great white sharks tend to hunt during daylight hours. Bull sharks are also more likely to attack in shallow water and by far are considered the most aggressive.

3. The most dangerous to humans is the great white shark which, while usually spitting out promptly its mistaken bit of human flesh, leaves huge bleeding wounds on its victims. The great whites that attack human tends to be in the 8'-12' range in length leading to speculation that they are inexperienced juveniles still figuring out how to hunt for the seals they prefer.

4. We are more dangerous to sharks and humans kill thousands for sport and food every year.

5. Some sharks travel thousands of miles and some have been known to travel 1800 miles in a six month period. Very few are thought to be territorial.

Peter Benchley himself felt some responsibility for the negative attitudes that the general public felt about sharks that he felt were created due to his book. He later in life became an ocean conservationist and in 2000, he wrote: “considering the knowledge accumulated about sharks in the last 25 years, I couldn't possibly write Jaws today ... not in good conscience anyway. Back then, it was generally accepted that great whites were anthrophagous (they ate people) by choice. Now we know that almost every attack on a human is an accident: The shark mistakes the human for its normal prey.”

What happened in the Red Sea attacks is a tragedy and frightening to think about. We as human beings man never know why the sharks attacked, and why such an infrequent thing happened so many times in one short time frame. What we can do is try to figure it out and change our behavior. For certainly, it seems very likely that no matter what the cause, human beings helped cause this tragedy. Blaming or demonizing the sharks will do nothing positive and has the potential to cause even more ecological imbalance as in our fear, we kill any shark we can catch. I hope that the families are receiving the help that they need to grieve and recover and that the victims are safe and recovering as well. But I do hope we see this as a lesson that we can attempt to learn and not as another opportunity for fear and murder. Our Heavenly Father loves us... and the sharks... and the earth. May we remember that... and that we can coexist... together. 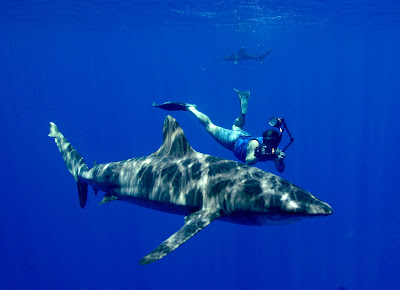 Posted by Badgerdown at 7:55 PM