How to Save an Apex Predator... and in turn, Save Ourselves 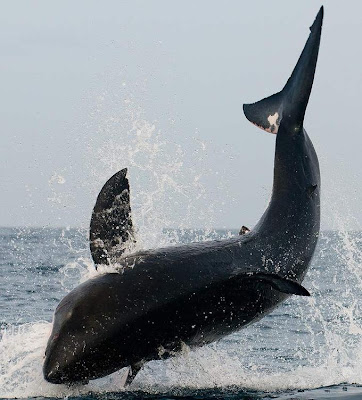 Article of Faith 13: “We believe in being honest, true, chaste, benevolent, virtuous, and in doing good to all men; indeed, we may say that we follow the admonition of Paul— We believe all things, we hope all things, we have endured many things, and hope to be able to endure all things. If there is anything virtuous, lovely, or of good report or praiseworthy, we seek after these things.”

In some ways, the title of this post is an oxymoron. An apex predator is by definition a “predator that have virtually no predators of their own, residing at the top of their food chain.” So it begs the question of why an animal that has 'virtually' no enemies needs to be saved in the first place...? How did the great white shark find itself in the exalted position of 'king' of the seas and yet be in in such risk of extinction?

The answer is very complicated. One reason appears to be simple biology. Any predator reproduces at a slower rate that a prey species and the great white shark is no exception. The female great white will not become pregnant until she is at least 4-5 meters in length (thought to be reached around 9 years of age). She will then give birth to 2-9 pups and will not become pregnant/ give birth again for at least two years – it is also thought that the larger pups in the sharks belly will eat their weaker siblings so that only a few will actually be born. On average, a female great white shark will give birth only twice in her lifetime... although so little is known about the breeding of great whites that these numbers could be incorrect. However, if we assume the very best situation and every pup survives that is born, this shark has very little leeway to be able to keep its population steady if anything else happens that could potentially adversely affect its population.

Unfortunately, there are a few other adverse situations that happen with great white sharks. Sharks are prized for their jaws, teeth and trophy status to sportsmen and targeted fishermen. They can become trapped in protective beach meshing that has been set up to protect us from them (when they become trapped, they will suffocate within minutes. The sharks are also at risk of dying after being caught during commercial fishing for other fish. They also have the problem that inshore habitats that are commonly used by adult great whites as birthing and nursery areas are becoming degraded and in some cases taken over by another apex predator -man. Shark fins are prized for food and hundreds of sharks are killed each year after they are caught, their fins removed, and then they are dumped back in the ocean where they die as they can no longer swim or catch food. When they are caught and kept, their flesh is usually sold under the name of smooth-hound shark. Shark cartilage is sold as a 'health' food and their skin is used for leather. Some great whites are even caught to be prominently displayed in large aquariums. And some are killed as a byproduct of media frenzy and fear/revenge after a human is attacked by a shark while swimming or surfing- even if the shark involved was definitively not a great white shark. On average a shark will kill five human beings a year on accident while human beings kill hundreds of thousands of sharks a year.

So, with all of this information... what can we do to help the sharks survive? One thing is to educate yourself and others about sharks. Unnatural fear can only be combated and abated with knowledge. If the majority of people understand that shark attacks are rare and killing sharks because “they are sharks” is wrong and unacceptable, media reactions will go down and people will be less likely to go out and indiscriminately kill them. Do not buy shark products and, if enough people do not buy them, then they will become less valuable and fewer sharks will be killed for necklaces and trophies. We need to work harder to keep our beaches clean and unpolluted so that breeding and nesting areas are available for sharks to use.

By now, you are probably wondering why I would suggest that saving the shark has anything to do with saving ourselves. In Mormon terms, we believe salvation is attained through a combination of faith in the Atonement and good works, with emphasis on the good works. Many people tend to be fairly 'species-ist' and believe that because we are 'made in the image of God', we are more important than any of our Heavenly Father's creations. However, the scriptures tell us that the Father notices death of a sparrow (Matthew 10:29-30)... How can we decide that our fears are more important that a creation of our Father? How can we allow one of his creations – an entire species- to die for poor reasons; our fear, our ignorance, our lack of concern, and our lack of will? How can we allow our fear to overshadow the beauty and majesty of this animal. And what will happen to us and our world without the great white shark? Will our oceans become barren as the the great white's prey explodes and eats the fish to an unsustainable level? Will we have to put fish on an endangered species list and no longer be able to eat is as a healthy meal? Will other predators take the place of the great white shark that might become even more dangerous to us in the future? Would the oceans become a truly dangerous place for us to swim in or enjoy?

***** On a slightly different note, I believe (my belief only) that the more we human beings dive in cages to see sharks, the more sharks become 'used to us'. I believe that sharks are more likely to attack people when they are more comfortable in doing so- predators tend to not attack other predators due to fear of injury). The more accustomed they are to our presence in deep water (and our 'calling' them with blood), the more likely we are to convince them that we are a tasty and easy treat. And it is more likely that the 'man eater' will begin to eat us instead of our usual cases of mistaken identity. The recent shark attack in South Africa is in my mind as I type these thoughts. *****

It is in our interests- both temporally and spiritually- to help save the great white shark.. Of course this is only my opinion.... What do you think? 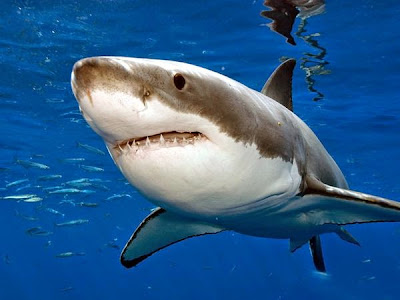 Posted by Badgerdown at 4:29 PM