Challenges of an Apex Predator: The Great White Shark and our Ecosystem 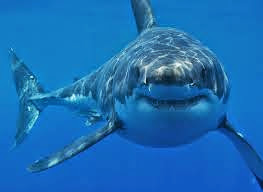 The members of the shark family are different from most other animals that live in the ocean due to their lack of a bony skeleton. Instead, sharks have a cartilaginous skeleton which gives them an advantage of a lighter weight physique. They have jaws that do not attach to their cranium which allows greater range of movement, teeth that are continuously replaced with the advantage of always having a strong weapon for catching prey, and their bodies and skin are developed for easy movement and speed in water. One disadvantage to not having bones is that the shark is not able to swim backwards- only forwards or to the side. Sharks also have the disadvantage that they have problems with buoyancy- a very fatty liver helps to keep them from sinking, but most sharks need to stay in constant motion so that they do not sink, and also to breathe as they need the water to move through their mouths to their gills so that they can breathe. 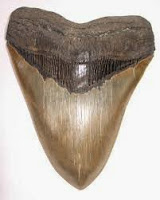 Sharks have a very long history on our earth. Sharks are believed to go back hundreds of millions of years and modern shark ancestors are believed to have begun around 100 million years ago. One of the great whites well known close ancestors was C. Megalodon, a shark that is believed to have gained lengths of 100 feet (In fact the great white is C. Megalodon's only surviving close relative although this is relationship is not agreed upon by all scientists and is a subject for much debate.) The great white shark in many ways physically looks like its past ancestor -whether they have behavior in common is still debated by scientists.

The great white shark is a very important and vital part of the ocean's ecosystem. As an apex predator, they feed on a large number of invertebrate and vertebrate animals - examples are sea lions, seals, other sharks, rays, whales, small cetaceans, etc... As an adaptable animal, its diet can and does change with its environment so studying the shark's feeding habits are difficult at best. Because the great white shark is the 'top dog' of the seas so to speak, its importance to the oceans and to our world cannot be overstated. If the great white shark was to become extinct, it could lead to huge increases in its prey populations which in turn will cause changes in many other animal and plant populations. And unfortunately, this shark is currently endangered and runs a real risk of extinction in the future.

So, you ask, why have I possibly bored you with all this information about a animal that at best you have never seen and know very little about? Why defend a creature that seems to have so few redeeming characteristics to the majority of the human population? A few ideas are listed above. In the last installment to this post, I hope to answer this question fully and also hope that I can instill a sense of concern if not urgency for the endangered species of the world which struggle and for the sanctity of life that I believe in.
Posted by Badgerdown at 4:24 AM