Sometimes a title says more about a film after it is experienced than it expressed before you opened yourself to the knowledge within. Jean-Michel Basquiat was an artist of pure brilliance who not only instinctively seemed to recognize ‘art’ in the differing facets of the world around him, but also understood so much of the human and art history that came before him and allowed that “history (to) walk with me too.” He used many ‘styles’ in his artwork between drawing and painting, graffiti and collage technique, obscured language, and references to other artists in other fields, including biology, archeology, music, etc…

This artist also reminds me of the fact that how we describe people and their work really matters. Think of the images that you conjure in your mind from these descriptive words:

“…terribly young, very ambitious”
“difficult artist”
“sad but so sweet”
“…wild boy”
“Black Picasso”
“…primal expressionism”
“(Were they) in front of new stars… or about to get robbed?” 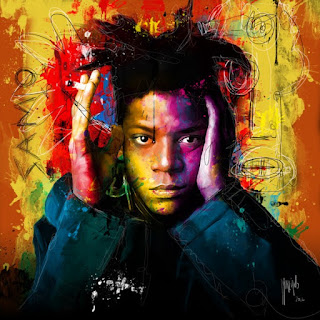 I find myself quite torn by these phrases for these sentences describe the man I watched painting, smiling… with heightened focus and an independence and creativity of thought that is remarkable. I find myself thinking of the energy and the expressionism of the man… yet these phrases are not commonly used to describe most adults. As the title symbolizes, each of us- his friends, critics and culture describe this vibrant man as a boy…”so sweet, difficult, wild…” These words jar against my ear and my soul and I find myself recognizing the barely veiled racism that Jean Michel dealt with in so much of his life… and the racism inherent in me as I struggle to find the words to describe his work and find my words focus more on the artist and my impressions of him rather than his work itself. Twenty years, later, our culture and each of us is still trying to understand and recognize the way we divide those around us and infantilize African American individuals and culture. As Basquiat found, he became a symbol or representation to the white culture around him of all Black individuals and culture… a stereotype that is fraught with inaccuracies and biases. He too, also recognized the difficulty of critics to critique his work on its own merits… and not his personality. He recognized that no one, including himself, could separate his skin color from his work and he created over 2000 paintings and drawings that covered a wide range of topics including slavery, Black History and racism, poverty, integration, and social commentary.

I found myself both repelled and attracted to his work and as I watched the videos of him painting I found myself drawn to his hand, watching the image change and come to life in front of my eyes. He was so quick and so focused that I found I rarely really understood the image he wanted to create until the completion of his piece. I found myself questioning my views on art creation – How is art defined in my mind and how much does timing and speed of creation factor into my opinions? Why did I want to dismiss his work in the beginning of the biography because it looked like ‘just graffiti’ to me? How did his understanding of history pull me more into his work and create the new admirer I have become? I found I finished this film with a very different image of the artist and his work than I started with only an hour or so previously.

Learning about his life reminded me of a character in Greek mythology named Icarus who also was ambitious, motivated and desired to get the ‘respect he felt he deserved.’ He was always reaching to achieve more and as he reached the heights of youth, fame, and wealth too quickly, his mental wings began to fall apart and the earth lost an amazing thinker and creator too soon at 27 years old. His story is one that I am used to reading in musician or thespian circles (Kurt Cobain, Amy Winehouse, and Heath Ledger come to mind), but not in the clean world I envision art culture to be. His world was uncomfortable so it also didn’t fit into the culture it asked us to look at and think about. I also relate to looking back and feeling embarrassed about my past- thinking about what I should have done differently, etc… In the end his life was so radiant that it encompassed even himself and we can now only look at and try to understand his work and how it speaks to the society around us.

These last two pictures I saw at the Tacoma Art museum recently: "Bird On Money" and "One Million Yen" 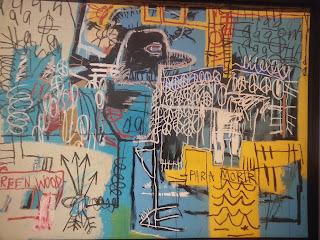 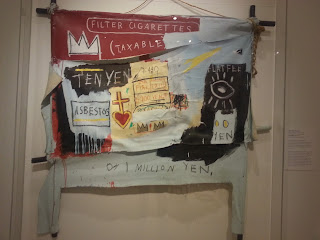