Reaction and Thoughts on "Girlhood: Growing Up On The Inside"

This post is on an unique documentary that followed the lives two young women who became incarcerated in their teenage years... and how each of them changed and 'grew' through that process. Both individuals had open ended sentences which meant they would be released based on their behavior and family circumstances. The young women were named Shanae Owens and Megan Jensen.

Shanae was incarcerated because she got into a fight with another girl and the other individual died. She has some amazing family who really care about her and just want to really help her improve, to love herself and to have the best life that she can. I can feel their support in every moment with them and its obvious that she feels their love and support too. Even though she has done something really bad, she feels secure in their love and caring for her. Her family also really openly talks about their flaws and problems- her father admits to a shady past and her mother states, “I've been there.” One of the questions that her social workers and probation officers look at is whether the family is growing as well, and I see so much of that in these clips. Even at such a young age, Shanae is learning about critical thinking and in counseling sessions makes comments such as “That might be effective for her.” I listened to that comment and compared it with some of the individuals around her and thought of her as an older woman inhabiting a young body with a brain wise and thoughtful beyond her years. She has had circumstances that in many ways I can not fathom; raped by several men at age eleven, becoming pregnant at age eleven (not sure if they were from the same circumstance, but I suspect they might be), getting into a fight and not even remembering what happened during it, etc... When she is moved to a group home, she reminds herself, “I started at the bottom there, I can do it here”. She reminds herself of her flaws but also focuses on her blessings “They never gave up on me, my parents, my family, nobody...” She finds her strength in her family and their love for her, so much so that she is able to continue to draw from that strength even when her mother passes away. She seems to see how to grow even within tight limitations and how to use the limitations in many ways to her own advantage.

Megan is an interesting young lady. I am not sure what she was incarcerated for as if it was mentioned I missed it... she doesn't seem to talk about it at all. She states that she is in trouble ever day at her facility and that she doesn't care. I watch her and realize that she almost never looks at the person she is talking to or the camera... almost like she doesn't notice that they are there. Megan states several times that she 'doesn't care', but that isn't what I feel as I watch her. It feels like she cares so much her heart would bleed with the showing of it, she looks away to hide herself, her bravado and anger are her masks. I sense her fear of relationships and hurt, but I also feel her strength and resilience... her desire to be better and to have better is just as apparent as her defense mechanisms.

“I regret so much... I feel like an old woman trapped in a young girl's body”

I see parallels between her and her mother and the ways that they think as well as differences in their views. Both of them seem to state at different times that they have nowhere to go and you can see how this view of their lives and positions can shape a negative vision of their lives and possible choices going forward. Her mother states that they need to go to counseling together and Megan refuses- a struggle that I can see in two lights. Counseling would be helpful for Megan for her own problems and learning to deal positively with her anger, but at least at this point I am not sure that family counseling would be beneficial for her. Her mother complains that Megan states that her mother was never there for her – is a 'stranger' to her in fact – and then state that she had custody of Megan until Megan was seven. You see her mother try to count out how many years she had with Megan and the use of words like custody, she had her grandmother, etc... suggests that Megan may have a valid viewpoint... her mother wasn't there even when she wasn't in jail. I watch Megan tell social workers and probation officers that she will not avoid undesirables because her mother would be considered an undesirable and as time goes by to cut her mother out of her life, recognizing the danger and stress that it causes her in her life. Megan has more options than her mother... mainly because she sees that she has more choices than her mother. In so many ways, their viewpoints are similar but Megan's are beginning to evolve as she heads out on own and starts to try and live on her own and with friends. She doesn't have the strong support of much family at all... you do not see her grandmother much at all and only hear about things she might do, etc... (In her grandmother's defense, it sounds like she is overwhelmed trying to deal with all the problems she faces between herself, her daughter, and all her grandchildren.)

I see a very tough life for Megan ahead of her. She tends to fight her limitations and looks at adversity in a short term way, not recognizing how her behavior and thoughts can affect her long term choices and limitations. I want to reach out and help her and also back up because her anger scares me a bit... no matter how justified it might be.

Something that interested me and I am still thinking about is that Shanae's family seems more close knit and show their love for each other better. While Shanae seems to have committed a harder crime and therefore, has more to overcome along with the lack of privilege that she has due to race, gender, etc... she is the individual that I have the most hope for after watching this film. Both of these individuals were living their lives beginning to relieve the cycles of their parents that were potentially destructive to themselves and others. Andre Lorde states, “There is no such thing as a single issue struggle, because we do not live simple issue lives.” Both of these individuals show us a good example of how trying to separate people into single categories isn't helpful for the individuals being classified nor really informative to those doing the classifying. It seems like the only consequences of trying to see people in these limited vision are negative... for everyone involved. Megan's mother makes a very excellent observation- “It doesn't matter what you did, it matters what you do” After the death of her mother, Megan mentions that she has so much to forget and she could get drunk or smoke to 'try and forget' but that wouldn't really be helpful in a positive way for her- a very mature observation for some her age and with her grief. I see Megan as getting some advantages that she didn't really work for... that Shanae only got through hard work and in some ways, I think that Shanae will do better for it and that some of Megan's privilege is helping to hold her back from what changes she really needs to make in her life.

I wonder how the director chose these two girls, how she found them and what about each of them drew her to them to help her express her ideas and thoughts. I wonder how these young women changed the ways that Liz Garbus viewed them and their individual situations and how all the individuals involved in this project may have modified their viewpoints on these women and incarcerated young people in general based on the work they performed for this film. I am grateful to see this small vision of what could have been my past and what so many struggle with. Thank you.


One how that came up in some reading near the end was "Orange is the New Black." I have never watched or had any interest in watching this show, however, the statistics in the readings were powerful, sad and horrifying. The fact that jails are now are largest mental health providers in our country isn't totally new to me, but adding women to that equation is. Recognizing that their families and children are affected by the states' choice to incarcerate these women instead of providing mental health services and giving them the ability to be at home seems to suggest that what society's goals really are is to provide people for private incarceration for profit, instead of helping people be productive members of their communities. The documentary asks a good question... “Is incarcerating these women worth it?” I suggest it is not. 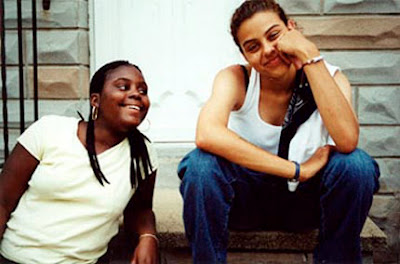 Posted by Badgerdown at 9:37 PM