On Children and Rodents...

I had a fairly neat experience the other day. I forget sometimes that not everyone gets the same experiences that I had in my childhood…. And I will admit many parents would probably find my need and almost obsession for a rodent to play with to be at best, bizarre. So having a hamster or mouse to hold and feed and play with is something that I not only enjoy, but I almost do not feel ok without one. (That’s a little hard to explain and many people will not understand so I apologize… but those who do understand will nod and know exactly what I am talking about.) 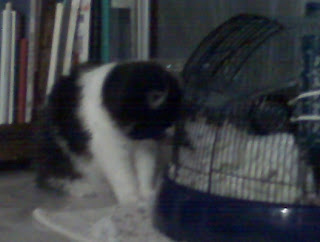 My current friend is named Maximilian Robespierre. He was a gift from one of my CPR classes- repeat customers are awesome because they remember the things that you like. :) I have never had a gerbil before and he has been quite a new experience for me. For one thing, he is much quicker than a hamster, but not as quick as a mouse. He also has a personality that is pretty hardy and amazing. He loves people and has never bitten anyone; well, except the cats who have tried in the past to figure out how to remove him from his cage. I never knew whether to laugh or cry when I came home and found a cat crying and whining with a hurt paw or nose… and my small white gerbil looking pleased with a bloody face. It is such a bizarre and yet powerful example that my Robespierre has given me over the last year. 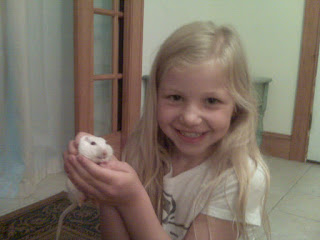 So I’m packing and moving and so it was with slight trepidation that I took my current ‘rodent-in-residence’ and strapped him into the front seat of the car. The trepidation is that rodents easily die if they become too frightened or stressed… and he isn’t really young, ya know… I shouldn’t have worried though. He climbed up to his pink penthouse and just watched out the window the whole drive. I couldn’t ever really tell what he was thinking but he made the trip safe and sound to a friend’s house for a few days visit while I get the apartment set up. She has four children who have never had a pet before so Robespierre was quite popular… wasn’t in the house long at all before they figured out he was there. And so in the evening I had the opportunity to sit down on the floor with all four of them and Robespierre. I could answer questions and watch their reactions to him. Claire, who is two, was a little afraid and very excited. She would move closer and then get close enough to see his nose twitch… and then she would scream! (Lucky, he clearly doesn’t stress easily huh. ;) Finn and Ian would pet him and were clearly excited but also had lots of questions such as why he doesn’t have a ‘kitchen in his cage’… that one was really hard to answer! Alia showed a slight amount of fear, but was willing to pet him and ask some pretty intuitive questions about his eating and grooming habits… 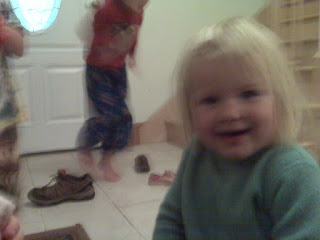 So we sat on the floor all together for about five minutes… letting Robespierre be petting or run around and burrow in my lap or even hop in and out of my pocket. I guess I sort of take the joy and wonder of rodents for granted now. Personalities change and they can all have different hobbies or quirks, but I have never met a rodent that I haven’t liked. It was such a fun experience to be able to introduce a pet and friend of mine to others who clearly saw him with a multitude of emotions including excitement and wonder. My life feels so full of negative stuff right now and to be surrounded by happy children who not only wanted my attention but really wanted to enjoy something that I enjoy as well was absolutely priceless. A true blessing and one that I that I was able to repeat before getting him to the new place yesterday. I wish him and his fan club fun in the future ... :)

Posted by Badgerdown at 3:34 PM