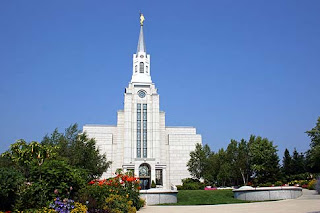 So last Saturday was set for a branch temple trip. A day that so many people were going to come down and watch a wonderful couple get their endowments and then the whole family would get their sealing. I agreed to come and watch children at the nearby church so that whole families could come and other couples could actually do endowments with each other instead of the more usual (one person stays home watching their children and the other gets to go to the temple.) When I agreed several weeks ago, I didn't really have any idea of the full emotional challenges that I would be hit with this week, but I actually should have known... any trip to the temple is usually preceded by challenges so that I have to really actively and painfully force myself forward and those challenges do not end until I get to the temple... or at least a few hours into the drive. This week was no exception... although I think that the challenges I have faced this week were a bit more than I have ever experienced and they never were truly able to be left behind this visit.

So after some initial difficulty of getting into the church building we got all the children in and set in the nursery and the gym. A few Kindles were passed around and my computer was happily enjoyed for a few games of 'Plants vs Zombies.' The younger ones came into the nursery and we found many toys and fun. I got to officially meet a new member of the ward and for the next few hours I lost myself in the task of watching several children – I think eleven at the highest count. Helpers came and went , but the children were a constant and they gave me so many laughs and so much joy. A few things really stick out about this time.

1. At one point early in the day I was asked a question by one of the sisters that I answered honestly, but with great difficulty. I was able to turn away to hide my distress and I think that I managed to actually hide most of it (I'm not foolish enough to think I hid all of it... I think that sometimes my pain seeps through my pores and is always visible no matter how much I try to smile) The second I turned and closed my eyes I was tackled by a beautiful child named Claire. She wrapped her arms around me in a big hug and gave me a kiss..... and then went back to what she had been doing. I am not sure why she did it, but it meant the world to me. I felt this outpouring of love and care that pushed the tears down brought a genuine smile to my face. I felt more confident and just took a deep breath and dived into the work with most of my soul and not just my body.

2. One of the younger girls asked me to help her use the bathroom. I walked to the bathroom with her and stood outside while she completed her business and when I walked into the room to help her finish, she gave me one of the most wonderful lessons I have ever received from a child. She carefully explained that some boys may look like girls... they might have long hair or wear earrings, but she knew a sure fire way to tell the different. See, girls ALWAYS use toilet paper when they use the toilet, but boys will only use toilet paper when they poop. So, she explained, if I am ever in doubt as to whether someone is a boy or girl... I can follow them to the bathroom and spy to find my answer. (I am still laughing about this!)

3. At one point , I was reading a book called “The Tawny, Scrawny Lion' out loud to a room full of children and one of them came and leaned up close. Her name is Kess and she was so interested and was leaning so close I thought she might climb into my lap at one point. I have never really spent any time with her before so it was nice to get to know her a little better on this trip.

After 2pm, I was able to head up to the temple and do baptisms. And to my surprise, even though I was over 1/2 an hour late and wasn't even sure I could sneak in... they were just starting! So I was able to change and join the group. This was the first time that Kess and her mother had ever been to the temple to do baptisms and I earned something really, really quickly... I am not the only person with severe sensory problems in my branch. The idea of total immersion was clearly fearful and terribly uncomfortable for them both. Both of them managed to do one baptism each and it was an amazing experience to view these brave women, struggling so hard to do something that other people find easy or take for granted. Baptisms used to be very uncomfortable for me with my sensory problems and I have really had to work with my body to make them something I can do and still feel the spirit. At one point when Kess was trying so hard to figure out how to do the baptism through her fear, I realized that I was praying and begging so hard for her to be able to conquer her fear for the few seconds it would take.... and I realized that everyone else was too. All the people waiting in the chapel were standing at the window watching, the men around the font, and the rest of us.... just silently pleading with the Father to help her. And she did it! She managed to do it and I am so grateful to have witnessed such a wonderful and brave act. I was so blessed to be there and I am so grateful for the examples that so many wonderful people give me. 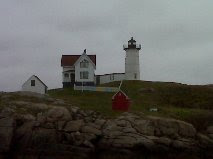 After the baptisms and confirmations we started home. I was riding with some friends and they gave me a tour of Kittery and also took me to see a beautiful lighthouse... (I thought of you, Carolyn, as I looked at it. It was soo beautiful and so familiar... I realized it must be a very famous lighthouse because I think I have seen it on cards and some calendars as well.) Then I stayed over at their house in a wonderful cozy bed and slept better than I have in ages. All in all, an amazing day! Thanks for letting me share it. :)
Posted by Badgerdown at 7:28 AM