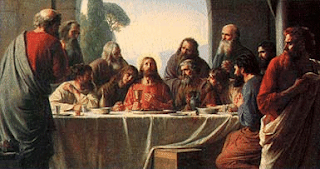 So this last Sunday I got to attend church in Washington state- Renton to be sort of precise. It was an awesome service... although I will admit that it was just awesome to be able to go to church! This last week, the topic was on the sacrament. And I learned a few things that I thought were neat as well as heard things that I knew...but it was nice to hear them again. Here are some highlights:

1. The sacrament is a reminder of a covenant that we make with the Lord.
2. Brigham Young was the first prophet to set it up so that 'children born under the covenant, but had not yet made the covenant' could take the sacrament.
3. The sacrament is a sign of the true love that Jesus has for all of us.
4. The sacrament is also a 'giving' ordinance, particularly for sinners... of which we all are. :)
5. Everything that is said, sung or performed in the sacrament meeting should contribute to the grandeur of this sacred service.
6. The scriptures say that we should think about the body. Why? It was given to each of us as a sacrifice. It was shown to us after his body was a perfected, glorified body still maintaining the scars from the crucifixion.
7. Sacrament and the ritual of sacrament are the most important reason to attend church- it is truly the main reason for attendance.
8. The words sacrament and sacrifice share the same root 'sacra' which means holy.

Taking the sacrament from as young as I can remember has always felt like a 'right' and it felt funny to realize that children were told at one time not to take the sacrament. I love the idea that Brigham Young (if he did- I am not sure why he changed the rule) realized or decided to use human habit to teach children. If, as a child, I was told that I couldn't take the sacrament and saw an adult who couldn't take it because they were 'bad', I think I might have decided that I was a bad child and that was why I couldn't take it. I also think that if might have taken at least a decade for me to figure out that particular idea was wrong... as I probably wouldn't have asked people at church, definitely wouldn't have asked my parents and assumed that was common knowledge and doctrine. (I do wonder how much stuff people commonly believe AND believe is common belief and/or correct doctrine that is more correctly labeled as false doctrine... a question I will never be able to answer in this life I am sure.)

In my mind, sacrament is the one action that we can do that makes us the most holy. We are forced to remove ourselves from our home and go join with other believers. To participate in a ritual that is older than ourselves... and is more than ourselves. A time of introspection and thankfulness. I really enjoyed this meeting.
Posted by Badgerdown at 11:13 PM