History of a Song: December - “Far, Far Away on Judea's Plains” 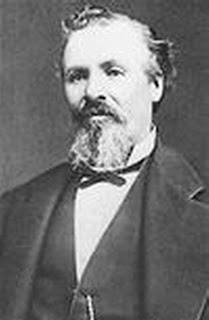 Merry, Merry Christmas all! And a wonderful holiday season. What an amazing time of the year. No matter how busy you are, the thoughts of Christ seep into a Christian's head more often during this time of year. It is almost impossible to ignore what the holiday stands for... although retailers do try in the hopes of distracting us. : D

This hymn (lyrics and music) was written by John Menzies Macfarlane who was born on October 11, 1833 in Stirling, Scotland. When he was a young adult, he joined the Mormon church (1845) and he came to Cedar City, Utah (1853) and married Ann Chatterly (He later married two other women and between the three women he fathered 26 children.) In his adult life, he worked as a superintendent of schools, a district judge, a farmer, a postmaster, a surveyor and a builder. He was also instrumental in founding the academy that later became Dixie State college of Utah. He worked with church choirs in a few Mormon towns and he also wrote the loved song “Dearest Children, God is Near You”. It is believed that he wrote “Far, Far Away on Judea's Plains” in 1869. In 1885, he fled to Mexico to avoid prosecution for plural marriage and he did not return to Utah until 1892 where he returned for medical care which was unsuccessful. On a painful and horrifying note, several sources have placed John Macfarlane as one of the approximately 100 Iron County Militia men involved in the Mountain Meadows Massacre in September 1857.

This hymn has stretched and jumped far from Utah and most people are unaware of its Mormon -and therefore relatively recent -origins. Many assume that it is a much older hymn. It is still a Mormon hymn- it has been performed and published by the Mormon Tabernacle Choir and by Nancy Hansen (also an LDS artist). Many people outside the church have not heard of the song, although it has been published by some other Christian artists.

Is this your favorite Christmas song? If not which song is? My son loves this song and it is by far his very favorite Christmas song which he loves to sing at the top of his lungs... and after several weeks of hearing it, I am glad when the season is over so we can 'put the song away' for a few months.
Posted by Badgerdown at 12:22 AM