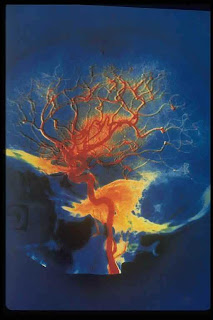 This week in class we studied three neurological disorders extremely common to women; migraine, Alzheimer's disorder and multiple sclerosis. I wanted to take the time to discuss the basics of migraines but also share a small autobiography from an old school friend who still suffers from migraines. I feel like unless you have truly suffered from migraines (or as my friend mentions sensory disorders and/or autism) you can have no idea what it truly is like and a definition will never been able to truly communicate that information to you. I have only had two migraines in my life and I wouldn't wish them on another living soul. I hope this information is not only informative to others, but also a forum for others to share their experiences as well for the education of my readers.

Migraines can be describes simply as a bad headache- however, that simple explanation really doesn't describe the scope, pain or symptoms of this disorder. A migraine can usually be divided into five separate phases called 'prodrome', 'aura', 'headache proper', 'headache termination', and 'postdrome'. While not every migraine sufferer will go through all five of these phases for every migraine, all migraines will usually have a few of these components. Migraines can also be divided into two types- migraines with 'aura' and migraines without. Symptoms of a migraine attack coming can happen a few hours or even days before the onset of the 'headache' and symptoms are not limited to, but can include irritation, euphoria, depression of affect/mood, intolerance of smell or sound that would usually be acceptable, aura, throbbing, pulse-like or pressure-like pain, as well as nausea and vomiting. It can be brought on by such things as inappropriate sleep, hormonal changes or menstruation, fasting, specific foods, environmental factors, possibly stress and even smoking or alcohol.

Some treatments include light medication such as over the counter pain relievers for mild symptoms as well as caffeine. For migraines that are not as mild, there are some pharmaceutical options that can be given orally, subcutaneously, or intra-nasally that have been shown to help. The most commonly used medications depending on symptoms and patient tolerance include Sumatriptan, DHE, anti-nausea medications, opiates, beta blockers, anti-epileptics, hormones such as estrogen and more. Other individuals use chiropractors, massage and acupuncture to control migraine symptoms.

I also got a pretty good biography from a friend -Renee Wrede- about her history and life dealing with migraines. I asked her specifically because I knew that at least for a while she was having them very frequently. What she wrote is a little long and is only lightly edited for spelling.

My hx of migraines
I started to noticed my headaches when I was little - about age 11. I remember pressing the side of my face against the cold window on the school-bus on the way home to relieve some of the hot throbbing pain around my eye/temple area. My family would tell me to lay down with a cool washcloth - but that didn't seem to help. Sleep and pain meds at the time offered limited relief. My PCP at the time told me that I would "grow out of it" - and seem to doubt my headaches - the sensitivity to light, sounds, touch, smell.

At age 13 I had a new doctor who first used the term "migraine" - he was able to describe my pain in detail - it was very validating. By this time I was experiencing weekly migraines and my family did not seem to believe me. By then we had noticed that cocoa triggered my migraines.

My new doctor prescribed a new upcoming pain med at the time (can't spell it) Toridol? It provided little to no relief.

I continued to experienced horrible migraines throughout school - if caught soon enough I was able to tame it down to where I could still function.

In April 2006 when my neck was broke while working with a teenage client my migraines went into overdrive. I struggled with the pain of the undiagnosed break and the migraines that seem to be a result of the break. Days went by without any relief - I was apply ice to the base of my neck as well as my head and face. I received burns for the cold on various parts of my head because covered ice packs were never "cold enough" so I opted to placing ice packs/bags of ice/frozen veggies/frozen juice cans directly on the point of pain.

I went to ER 2 -3 times a week - which eventually labeled me as "drug seeking" - although my tests always came out negative. I was diagnosed with a "mood disorder" because my pain affected my mood and my ability to work/focus/eat/socialize, etc.

8 months after the break the pain of the break had decreased but the migraines were ongoing. By now my migraines always included limited to no vision in my left eye. Black dots or white shimmering "diamond" images danced around my left vision moments before the pain began. I begged to be referred by a Neurologist - Dr. Good enough.
It was Dr. Goodenough who discovered the fracture in my neck. He also encouraged me to record my headaches and pains.

This was very informative - and helped me identify the migraines from the sinus headaches. It also helped me to identify that my hormones play a HUGE part in my migraines - they appear to cycle around my cycle. And Dr. Goodenough prescribed a daily med Topamax to prevent the migraines as well as a Relapax for when the Monster Migraines attacked. It seem to work - my migraines decreased from daily to 14 a month. Pretty good at that time.

I think my stress level, my physical and mental health continues to play a role in my migraines. I am still triggered by smells and cocoa. Now I experience 2-3 migraines a month. Did I mention that I often throw up when I have a migraine - this was particularly painful in 2006 while my neck was healing.

Despite the pain - it often amazes me how all my senses are brought to a new level - I remember laying on the floor in the dark ER bathroom - the only place that sheltered me of the light, limited smells, and muffled the sounds of the ER - and while I groaned with the frozen peas to my head I thought "I can smell bacon - they must be cooking bacon - God I want to throw up and die!" (They were in fact cooking bacon one floor below!) This is what I call the "superman affect" of my migraines - my hearing, smell, sight, touch are so enhanced that it's painful - I can only imagine that this might be similar to the term "sensory overload" that we often use with children an autism diagnoses. It's intense and it's hell.

After the break in 2006 - after the mood disorder and drug seeking labels - I wanted my life to end. The constant pain was too much - I couldn't take it any more. One night at the ER I whispered (I can't speak at a normal level during a migraine) - to the doctor on duty to kill me. "If you care about me - you'll kill me now." The room was dark - my boyfriend stood by my bedside - my connection with friends and family had also been affected by my migraines. The ER doctor laughed (loudly) and seem to take my request as a joke. Little did he know that I had already spoken to family members about custody of my son and possible funeral arrangements.

I can totally understand ending your life when you're in so much pain with no end in sight. I am grateful that a friend suggested Dr. Goodenough - it is frustrating that the ONLY assistance and support I received was from a provider whom I had to seek out. However, now I'm in a better place. Life is good - and I have a hard time believing what life was like 4 short years ago.

If you are reading this and suffer from migraines, please feel free to comment anonymously if you wish. If nothing use, I want to have a better understanding of the problems, but I also want to know how I can help people who are having these problems. Understanding the disorder I think will help. :)
Posted by Badgerdown at 2:03 PM